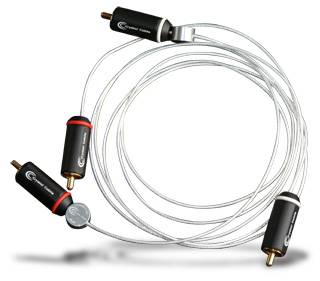 If there’s one thing Mrs. Smith hates about my audiophilia, it’s the cables: nothing drives her crazy like a rat’s nest of wires. She thinks cables should be heard and not seen, even if they’re fitted with lovely braid, LED lights, or brightly polished gold connectors. Just the other day, Mrs. Smith asked -- in all seriousness -- if our audio equipment could be somehow hidden on the other side of a wall, with only what she called “that nice, thin wire” peeking through to connect the speakers.

That nice, thin wire -- the only wire Mrs. Smith has ever complimented -- is Crystal Cable’s diminutive Piccolo speaker cable ($1310 USD/2m pair). Thin it is. In fact, I’m not sure I’ve ever seen speaker cable that could claim to be smaller in diameter. If the Furutech u-2T speaker cable I use in my office system is equivalent to a standard-sized car, the Piccolo is a unicycle.

The Piccolo moniker is shared by all members of Crystal Cable’s entry-level cable family, which comprises the speaker cable, an interconnect ($465/1m pair), and a power cord ($385/m). As with every Crystal Cable product, the Piccolos utilize the company’s proprietary coaxial design: a solid central conductor of gold-silver alloy for the positive signal, and an outer conductive layer of braided silver mesh that serves both as an electrical shield and as the conduit for the negative signal. (The power cord comprises two separate coaxial cables, their solid cores used for line and neutral, the braided silver acting as ground and shield.) Between the solid core and braided silver are sandwiched three ultrathin layers of Kapton, the same very strong insulator material used in military aircraft wiring, while the outermost insulator is transparent Teflon. Crystal says that the combination of these features minimizes signal errors throughout the audioband and leads to almost zero cable-induced distortion.

While these features are interesting enough, what really fascinates me is that the center conductor of each Piccolo cable isn’t nearly as small as the cable’s overall diameter would lead you to believe. With many cables, once you’ve stripped away all the shielding and thick layers of insulation, all that’s left are metal wires not much thicker than a few strands of spaghetti. Going by diameter, the ratio of insulation to conductor in the aforementioned thick-jacketed Furutech speaker cable might be 7:3. In the Piccolo, that ratio might be 1:9. But despite their very thin insulating layers, Crystal Cable says that their extensive laboratory tests show that the Piccolos are as safe and durable as any fire-hose wannabe. In fact, Crystal says that the inherent flexibility of the gold-silver alloy, silver braiding, and tough insulators makes the Piccolos less susceptible to damage from bending than are their competitors. My own experience bore this out: the Piccolo cables are easily the most flexible I’ve come across.

As the Piccolo power cord is best suited to lower-current audio components, I had it powering Simaudio’s new Moon 300D D/A converter (review forthcoming). The pair of Piccolo interconnects were run from the 300D to my reference Simaudio Moon i5.3 integrated amplifier, the latter powered by Synergistic Research’s Tesla T3 and connected to my new reference speakers, Definitive Technology’s Mythos ST, by the spade-terminated Piccolo speaker cable.

The inherent flexibility of the Piccolos made for easy connecting. Unlike fire-hose power cords, there was no danger that the Piccolo version would be so stiff as to lift the little 300D off its shelf, or unduly stress its IEC power inlet. Nor did the Piccolo speaker cable need to be wrestled into place or try to pull itself loose of the binding posts. In fact, connecting the Piccolo speaker cable was a new experience for me, thanks to Crystal’s innovative use of cable “tails.” These removable cable terminations can be separated from the main cable for ease of installation and reconnected using a twist-and-lock connector. The tails also make it possible to upgrade the main speaker cable without having to undo judiciously tightened binding posts on amp or speaker.

The Piccolo interconnect uses standard RCA connectors that look like a Furutech DIY product, but, I’m told, aren’t. Whatever they are, the connectors gripped RCA jacks well and seemed to make an airtight seal -- when I unplugged them, there was a definite pop. Unlike most interconnect cables I’ve used, the Piccolo needed no room at all between the backs of the components and the wall to accommodate them, as they draped with all the resistance of fine silk. Mrs. Smith very much appreciated this -- the Piccolos were practically invisible, even when she examined my equipment rack from the side. 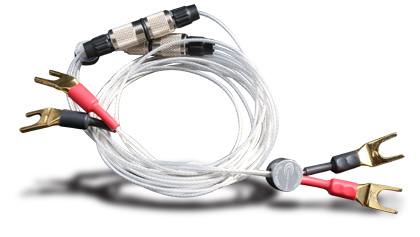 There are many theories about the “right” cable diameter that should be used for speaker and power cords, but most manufacturers settle on or close to 12 gauge. There’s no electrical-engineering reason why a 12-gauge power cord, for example, is needed to connect 14-gauge standard household wire to an amplifier, or why that size of cable, rated for 15 amperes, isn’t sufficient for transferring 4-5A of amplified audio signal to speakers. Nonetheless, there’s a pervasive notion that cables of bigger gauge (i.e., smaller diameter) somehow constrict electron flow and “choke” the sound. If that’s true, then the Crystal Cable Piccolos are exceptions to the rule. Small these cables may be; their sound was anything but.

I admit to experiencing some cognitive dissonance: my eyes saw tiny cables, but my ears heard thunderously deep bass. The deepest piece of music in my collection is Walton’s Crown Imperial, in a high-resolution digital file from the sampler of the same title (DVD-R, Reference Recordings RR-112 HRx). This fantastically energetic composition has more bottom end than Nell Carter. With the Piccolo family in my system, I heard more of the low, low organ notes whose existence other cables merely hint at. The difference with the Piccolos wasn’t subtle -- it was a sit-up-and-take-notice thing. Not only were those pedal notes more defined, there was the revelation of even lower notes that I hadn’t heard before. In the easy-to-hear realm, the timpanic explosions that punctuate this piece of music were room-fillingly loud and wonderfully concussive. 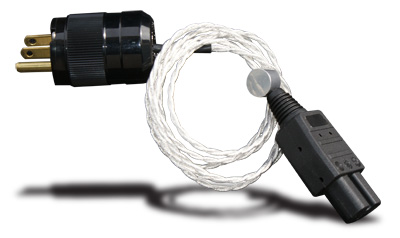 Of course, the Piccolo cables didn’t do only bass. I also found them able to enchant me with their clarity and detail with both male and female voices, both of which had a naturalness that made it seem as if there were no recordings, microphones, amplifiers, or speakers between my ears and the singers. It may be that Crystal Cable discovered its name when it discovered just how clean and crystal-clear its cables sound. These were very neutral cables.

The Piccolos were also exceptionally quiet, indicating that their shielding methodology was working very well. That high-resolution HRx recording emerged from a very silent background, making it all the easier for the timpani to have the impact of a dancing elephant. Quieter records, such as Charles Dutoit and the Montreal Symphony’s performance of Holst’s The Planets (CD, Decca 289 455 983-2), benefited from the lack of background noise, allowing secondary instrumental sounds to have more definition and giving a stronger sense of their placement in the soundfield.

That brings up another strength of these cables: the wide, deep soundstage they portrayed. Before hooking up the Piccolos, I’d been fiddling quite a lot with the placement of my Mythos ST reference speakers. Thanks to the Crystal cables, I haven’t felt the need for further spatial experimentation. The speakers have stayed put.

When the Crystal Piccolos arrived, I knew I’d eventually be stacking them up against the Analysis Plus Black Oval speaker cable ($239/8ft pair) and Micro Copper Oval-In interconnect ($315/1m pair), both also in for review. The APs impressed me enough that I thought the Piccolos would have a fight on their little hands. Pitting attribute against attribute, I found that the Piccolos had it over the APs in bass reproduction, which was deeper and tighter through the Crystals, as well as in spaciousness. The cables’ midrange and treble performances were much closer; which sounded better to me largely depended on the recording. But the Piccolos took the cake in the silence department, where there was no hint of noise.

Happily, I still had on hand Crystal Cable’s Bridge cable enhancer, and it took a lot of willpower to stop me from hooking it up to the Piccolo interconnect on day one. However, I exerted self-control sufficient to manage getting through a whole month before adding the Bridge to both the Piccolo and, for the sake of fairness, AP’s Micro Oval.

Holy Moses -- the combination of Piccolo and Bridge blew my mind. There was more of everything: more bass, more clarity, more soundstage, more music to enjoy. There were many instances of “I never noticed that before!” in so many songs I thought I knew well -- like fast guitar strumming in time with what I’d thought was nothing but the furious staccato solo of the flamenco dancer in “Zapateado,” from the This Is K2 HD Sound! sampler (CD, First Impression Music FIMK2HD078). There was also a previously unheard and curious-sounding cymbal hiding behind Holly Cole’s voice in “One Trick Pony,” from her Romantically Helpless (CD, EMI 81037). The Micro Oval and Bridge combination offered similar increases in performance, but not to the same degree as the all-Crystal combo. Piccolo plus Bridge made up the finest-sounding interconnect I’ve heard.

For comparison with the Piccolo power cord, I selected Synergistic Research’s T2 ($650/1m), which, like the Crystal, is designed for use with lower-current devices such as preamps and D/A converters. Although they follow very different design philosophies (the T2 uses active shielding and is “zapped” with millions of volts while undergoing the company’s Quantum Tunneling process), the cables sounded quite similar. Both had a noticeable effect on the width and depth of the soundstage, a phenomenon I verified by swapping in a third power cord, Shunyata’s Diamondback, which conjured up a considerably smaller stage than the other two. In short, it was pretty even money between them. Price-wise, of course, it wasn’t even money at all -- the T2 power cord costs nearly twice as much as the Piccolo.

When audio products as different -- and as attractive -- as Crystal Cable’s Piccolo series come along, there’s a tendency to dismiss them as being mere “lifestyle” products unworthy of the serious audiophile’s attention. In this case, such a dismissal would be foolhardy. The Crystal Cable Piccolo family represents a benchmark in excellent cable performance at reasonable prices, and provides all the high technology any forward-thinking audiophile could want in an attractive, reasonably sized package. These cables are so good that I can’t imagine what Crystal Cable’s more expensive models might do.