I started collecting LPs and singles back in my blushing youth, about a million years ago. At first, I admit, I didn’t care for them very well. But when the Discwasher first came out in 1972, I took the leap and bought one. While it didn’t deep clean really dirty records, it was great for new purchases and kept them pretty much like new.

Now here I am today. I’ve been through three Discwashers over the years, but the one I bought a year or so ago wasn’t up to snuff as far as I was concerned. This latest one just didn’t seem to clean as well new as my older one did after 15 years. So I started looking around.

After a bit of searching, I saw an ad for a new contender, GrooveWasher, and read the accompanying copy, obviously written by its creator. His name is Steve Chase, he hails from Columbia, MO, and as it turns out, he was a good friend of Dr. Bruce Maier, developer of the Discwasher. Maier was a microbiology professor at the University of Missouri and an “avid audiophile,” according to Chase. On the GrooveWasher website, Chase recalls that his wife worked with Dr. Maier at the Discwasher company until Maier sold it in 1982. 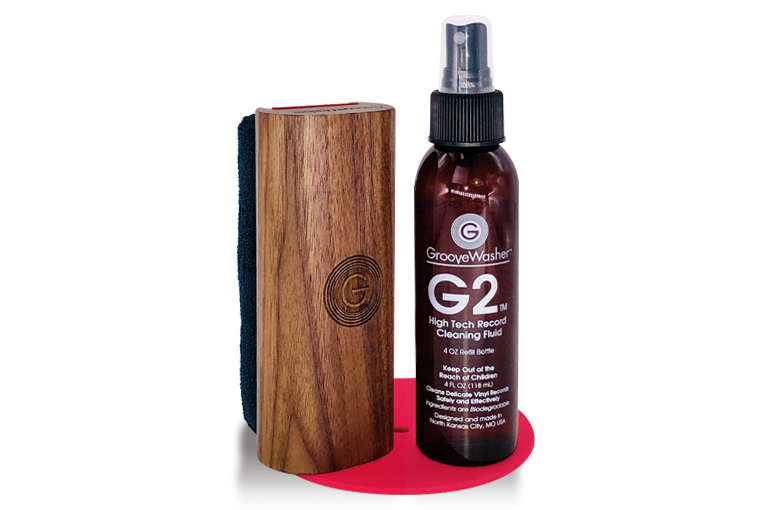 Over the years, Discwasher has gone through several owners, and it currently resides in the portfolio of Voxx International along with Acoustic Research, Audiovox, Klipsch, and Jamo, among others. I’ve read complaints about the new Discwashers in various audio blogs that echo my own opinion of its diminished effectiveness.

So, since it was time to retire my old Discwasher (I finally emptied the last of three fluid bottles I bought a number of years ago), I decided to give the GrooveWasher a try.

On first glance, GrooveWasher Walnut ($37.95, all prices USD) appears to be a near-duplicate of the Discwasher. The basic Walnut kit consists of a 4-ounce bottle of G2 cleaning solution and a walnut-handled cleaning pad. The cleaning pad is cushioned and covered in split microfiber, which the company claims is “many times more effective” than other cleaning fabrics. The kit also includes a circle of soft plastic that can be used to cover the record’s label while you’re cleaning it. 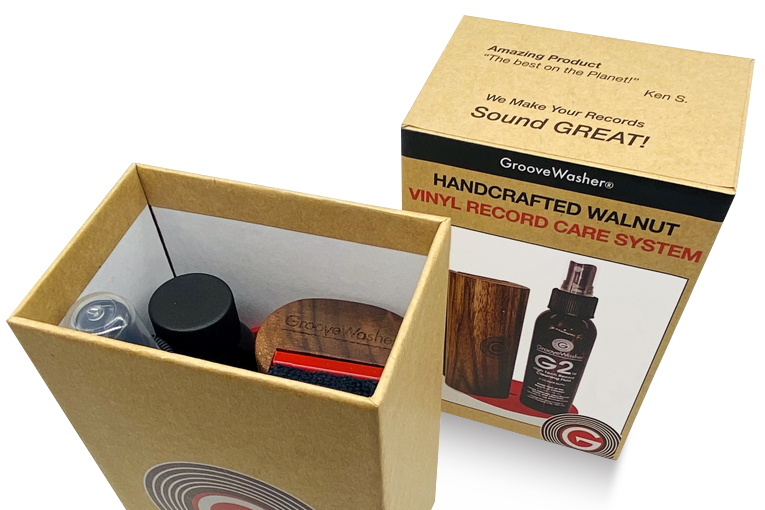 Fine cleaning a record, according to GrooveWasher’s instructions, involves placing your record on the turntable, putting the label protector over the record’s label, and then applying four or five spritzes of the G2 fluid. Once you’ve sprayed the disc, you’ll need to wait ten to 20 seconds until the cleaning fluid spreads out and sinks into the grooves. From there, gently apply one edge of the cleaning pad to the record as it rotates on the turntable, leaving it there for three or four revolutions (about ten seconds). Finally, using a rolling motion—and taking care to ensure the entire length of the pad is in contact with the disc’s surface—rotate the brush until the far edge of the pad is in contact with the disc (another ten seconds), then remove it with a flourish. This last maneuver serves to dry the disc.

If your record is grimy enough to need a second pass after you’ve cleaned it using the method above, try lightly misting the leading edge of the cleaning pad or dripping the fluid along it and giving the record another go-round in the fashion I just described.

GrooveWasher also offers guidance on deep cleaning discs away from the turntable. They recommend working on a firm surface and placing the record on a soft cloth. Once the disc is safely anchored, pump four-to-six mists onto the record to completely cover the surface. Wait at least ten seconds for the fluid to “dissolve the dust, dirt, and mildew in the record’s groove.” Then gently apply the leading edge of the pad to the record, wiping in concentric circles—in line with the grooves and not across them. Use the rock’n’roll/rotate method to dry and groom the surface. If a bad spot remains, spray on some more of the fluid, wait a few seconds, and use the pad to gently scrub the area, also in the direction of the grooves.

GrooveWasher notes that its system is designed to clean one record at a time, just prior to playing it.

It’s important to keep the pad clean, of course. Initially, I was using my old Discwasher brush to remove dirt from the GrooveWasher pad, but Chase told me that’s not effective. He recommends removing the brush from the handle—something you couldn’t easily do with a Discwasher—then wetting the pad with softened tap or distilled water, applying a couple “small squirts” of dish or laundry soap, massaging the pad to work up a lather, and rinsing and squeezing the pad until the water runs clear. Finally, to start the drying process, fold a hand towel in half lengthwise, wrap the pad inside the towel, and roll the whole thing around, squeezing the towel to remove moisture from the pad. Then unroll the towel, flip it over, and repeat the wrapping, rolling, and squeezing procedure. Finally, remove the pad from the towel and allow it to air dry overnight.

I keep my records in their sleeves at all times when they’re not playing. And yet, they almost always need to be cleaned. I played one older record without cleaning it (a real Bozo no-no for the dedicated vinylphile, but I have a point to make here). The surface noise was evident. I then cleaned the record with the GrooveWasher, applying a fairly generous amount of fluid to the pad and letting it work on the disc for six revolutions before playing the record again. 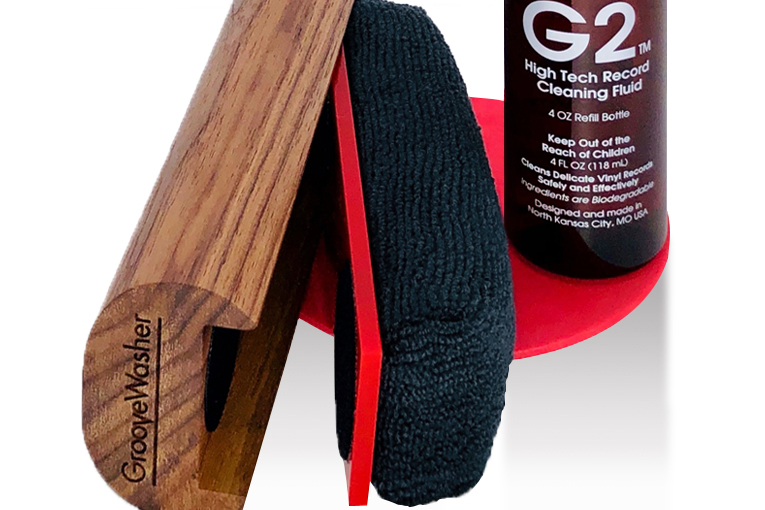 This improved playback significantly. But though the noise had diminished, it was still present. So, why not give it another shot of fluid and another go-round with the pad?

I did this, again using a fairly generous amount of fluid on the pad. I let it touch the disc for eight revolutions, then played the album yet again.

This time, the noise was reduced even further. No, it wasn’t gone—I could still hear some schmutz in the groove, but it was better than the untreated record.

The record I used was certainly a worst-case trial for the GrooveWasher. If a record is really dirty, the GrooveWasher won’t make a huge difference. To fix that, one needs a record cleaning device which, in most cases, is a fairly major investment ($300 or more).

Of course, used records often have scuffs and scratches, and although GrooveWasher does a great job on dirt, it can’t fix those permanent “features” of the disc. The company also recommends keeping an eye on your stylus after you’ve deep cleaned a record, as some of the groove grime that was loosened but not removed may end up on the stylus. They suggest several more cleanings may be needed. GrooveWasher also offers a G3 solution that is more powerful than G2 for heavier cleaning needs. Be advised, however, that use of G3 also requires a rinse with GrooveWasher’s GSR (GrooveWasher Super Rinse) or distilled water.

If your records are rather new (not just new to you), and you store them properly—perhaps even using those paper-lined plastic inner sleeves available on the web—and handle them gently, the GrooveWasher may just do you right. If you’re a newbie vinylphile, it’s a good beginner’s tool for taking care of your music. But at the rate I used the cleaning fluid, the 2-ounce bottle that comes with the kit would be finished in no time. However, there’s an 8-ounce bottle available for $17.95, and, if you’re about to pop for the cleaning kit, I’d suggest getting the larger bottle at the same time. And depending on the condition of your record collection, springing for the G3 fluid and GSR rinse agent may be a wise move.

The GrooveWasher is useful, but taking it through its paces has helped me to see that because so many of my records are decades old, I need something a bit more (ahem) industrial.