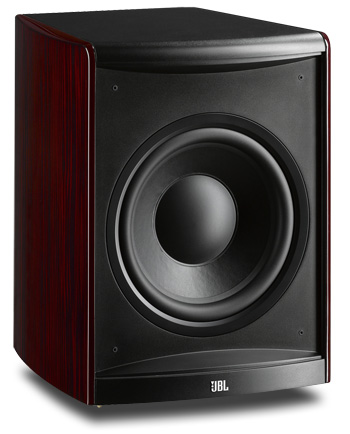 Not all that long ago, "full-range" loudspeakers were enormous; witness classic systems such as the Klipschorn, which not only stood 51"H x 31"W x 28"D, but demanded to be placed in the corner of a room. Such systems provided wide bandwidth and wide dynamic range, but didn’t win good vibes from interior decorators, or the spouses of most audio addicts. Something needed to be done, and it was -- but it didn’t happen overnight.

It was several decades before someone invented the modern powered subwoofer, in which a small enclosure contains a relatively large low-frequency driver as well as a powerful amplifier whose response curve is the inverse of that of the woofer's low-frequency rolloff: the sub’s low-bass response is flat down to a nearly ridiculous bottom. Such bass extenders, now de rigueur in home theaters, also lend themselves to good-sounding two-channel audio systems.

Granted, some still talk of the difficulty of getting a smooth handoff between the satellite speakers and the sub, the problems of significant suckout at the crossover frequency, and other painful-sounding maladies. But many of today’s A/V receivers include room-equalization and setup programs that can solve these problems. It takes a bit more effort with most two-channel systems, but it can be done -- at least to my own satisfaction.

JBL’s LS120P subwoofer ($1099 USD) is a relatively large box that measures 19.9"H x 14.6"W x 17.1"D. Its enclosure is finished similarly to the other LS-series speakers, in what appears to be rosewood (JBL calls it ebony) and a fabulous lacquer topcoat. The top of the box is finished in a heavy, leather-like plastic that continues down the front. The front grille is attached with posts and is easily removed; during the review period, I left the grille on -- it didn’t seem to affect the sound quality at all. The woofer itself is a 12" cone made of JBL’s exclusive PolyPlas material, a polymer-coated paper that JBL says combines low weight (for quick transient response) and high stiffness (for low distortion). The amplifier is rated at 400W RMS (700W peak), which should be enough for nearly any situation short of reproducing the sound of a Space Shuttle blastoff. The LS120P’s frequency response is claimed as 25-150Hz, with a continuously adjustable crossover from 50 to 150Hz; the crossover’s slope is a fourth-order, 24dB/octave type. No magnet weight is specified, but it’s probably pretty heavy; the sub weighs a solid 57 pounds. Included along with a good instruction manual are spikes and cups to prevent floor damage, and a 15’ mono patch cord. While JBL suggests placement for a two-channel system, the fact that the sub’s only input is line-level suggests that it was primarily designed for use in home theaters.

All controls are on the rear panel. From top to bottom are the phase switch (0° and 180°), an LFE/Normal selector (more on that below), rotary controls for subwoofer level and crossover frequency, an LED power indicator (green for On, red for Standby), and left and right RCA inputs. Finally, there are the mains switch and a two-pronged IEC power-cord inlet.

The LFE switch was a new one on me. As the owner’s manual explains, it’s there to make the sub integrate with the latest A/V receivers, which have a low-frequency-effects sub output. Engaging the LS120P’s LFE switch disengages the sub’s crossover-frequency control; the receiver itself now controls that. If your amplifier has no LFE output but does have a subwoofer output, flip the JBL’s switch to Normal, and use the supplied patch cord to connect the LS120P to your amp’s standard sub output. 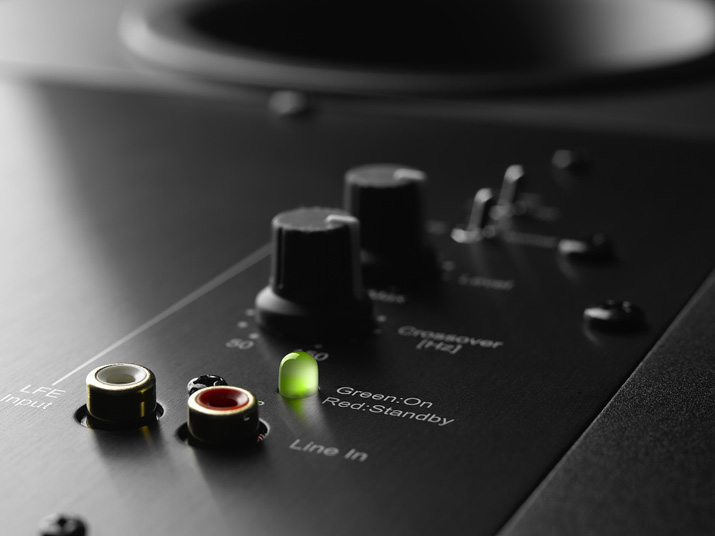 As the Linn integrated has only one set of preamp outputs and the LS120P accepts only a line-level input, I had to improvise. If I were more obsessive and wealthy, I’d have inserted a couple of small distribution amps between the output of the Linn’s preamp section and the inputs to the LS120P and the Linn’s amplifier. But I’m not, so I went with the cheap solution: adapters that feed from one RCA pin plug to two RCA pin jacks. One pin jack for each channel went to the Linn amp input, and the other to the subwoofer.

At the suggestion of the LS120P’s manual, and because I listen to a good deal of classical music, I first tried the sub behind the right-channel speaker, as the bass section of most orchestras is on the right. Indeed, that position proved great for symphonic music, but I didn’t like it for other types of music, so I moved the sub back between the towers, aligned with their woofers. For the JBL LS60s, I set the LS120P’s crossover at about 50Hz and the subwoofer level to about 1:00. When I used the Radiance 3s, the crossover was nearer 70Hz and the level was at about 11:30, due to these speakers’ greater sensitivity.

The first thing I noticed was how little attention the LS120P called to itself. Yes, the deeper bass response of the JBL combo of LS60s and LS120P certainly was noticeable. But with the sub between the towers, there was a pretty seamless handoff from sub to towers. I could develop a pretty good disco thump if I turned up the crossover and level, but I had to work at it for that kind of response.

As I often do when testing subwoofers, I experimented with some bass-heavy tracks through only the sub -- some of the same tracks I used when reviewing the Elemental Designs A2-300 subwoofer (see review of November 1, 2008). I set the level at 1:00 and the crossover at 100Hz. Deep bass with no highs creates a rather odd effect of disembodied sound that seems to come from everywhere, but it can reveal some interesting effects.

The first tune was one of my standards, "Bali Run," from Fourplay’s eponymous first album (CD, Warner Bros. 26656-2). The LS120P seemed to precisely replicate the sound of a bass guitar amp, perfectly articulating the five-string bass’s sound. When I added the LS60s back in, there was, again, that no-fuss, no-muss blending of the outputs of sub and towers. It made for very satisfactory listening.

What would a subwoofer review be without some pipe-organ music, for the true bottom line? I pulled out The Perfect Bach (CD, Angel 5 67728 2), for the Toccata and Fugue in D Minor commonly attributed to J.S. Bach, performed here by organist Fernando Germont in a relatively ancient (1960) analog recording. The LS120P alone articulated the pedal notes very well -- about the best I’ve heard them -- and the sub’s overall sound was strong and accurate. Bringing the LS60s back into the act provided well-defined sound from bottom to top, with no intrusions of Johnny One-Note bass.

Maureen McGovern, noted for her recordings of the theme songs of many disaster films, as well as her turn as a klutzy but well-meaning nun in the great satire of that genre, Airplane, has a fabulous if somewhat overpowering voice. On her Baby, I’m Yours (CD, RCA Victor 60943-2), her voice is matched to intense instrumental accompaniment, including some how-low-can-we-go bass lines. My favorite track is her cover of Dionne Warwick’s "Are You There (with Another Girl)." In this intimate recording -- McGovern is very close to the microphone -- her exquisite expression of the longing with which the song’s lyrics are imbued often yields a very emotional response: several friends, both men and women, have said they were nearly in tears at the end. With the LS60s and LS120P, it was an emotional roller coaster -- the JBL combo wrung from us every feeling possible while reproducing incredibly detailed sound, especially in the bass register.

My last selection was Bach’s Little Fugue in G Minor, as orchestrated by Leopold Stokowski and performed by the Cincinnati Pops under Erich Kunzel (CD, Telarc CD-80338). As I noted in the review of the Elemental Designs A2-300, a sub can loaf during the first half of the piece, which is mostly scored for winds and high strings. But when the bass viols enter, immediate deep bass is called for, and the LS120P answered that call with a sound that nearly equaled being in Cincy’s Music Hall. Yet it didn’t call attention to itself until an appropriate moment: a timpani stroke near the end that, in Stokowski’s arrangement, rather comes out of nowhere. If I hadn’t already known it was coming, I believe the LS120P would have surprised me -- its performance was so incredibly instantaneous that I was amazed.

I’ve had a number of subwoofer-and-satellite systems in my home -- my office and living-room systems are set up that way all the time -- but I don’t believe I’ve ever had a subwoofer that did everything it needed to do so inconspicuously as the JBL LS120P. Throughout my listening sessions, I was most amazed by how seldom the LS120P’s presence was obvious to me. It just did its job -- when it was needed, I heard deep, sonorous, well-articulated bass. When the recording didn’t include deep bass, the LS120P might as well have not been there at all.

The LS120P is not a sub for everyone. It sounded good with my Acoustic Energy Radiance 3s, but its timbre better matched the response of its JBL mate, the LS60. And the fact that it requires a line-level input (many subs offer the choice of line or speaker level) makes it a bit less versatile. Even so, I’d nearly be willing to go out and buy distribution amps to more efficiently match the LS120P to my Linn integrated. The JBL is that good.

Mated to JBL’s LS60s, the LS120P made for incredible, wide-bandwidth sound that should satisfy most listeners. That combination isn’t inexpensive, but good gear seldom is. I really like the LS60s ($1800/pair). Combine them the LS120P and the results are fabulous!