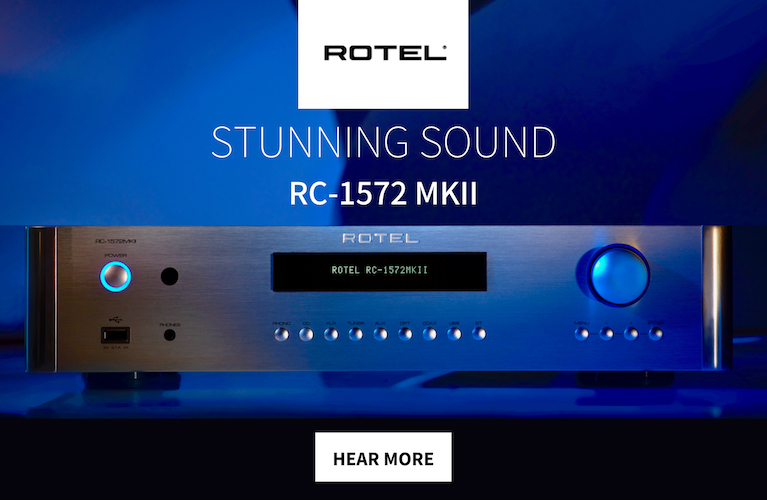 From mid-September until mid-May, the centerpiece of my system is a Raysonic SP-300 integrated amplifier. During those cool fall and cold winter months, I call it The Hearth -- its eight EL34 power tubes and four 12AU7 preamp tubes raise the temperature of the room by about 6° F. But come warm spring and warmer summer, I call it Unusable. Then, I need a cool-running solid-state amp to carry the load for the remaining one-third of the year. The E-Series Power Plant Balanced integrated amplifier ($3100 USD), from German manufacturer T+A Elektroakustik, arrived just in time.

As I lifted the E-Series Power Plant Balanced out of its well-packed box, I was struck by how much lighter it is, at 26 pounds, than my Raysonic tube amp -- less than half as heavy. Measuring 17.6"W x 4.7"H x 15.6"D, the Power Plant occupies a bit more space than the average integrated amplifier, but its silver case and black side panels are very handsome (a black case with silver sides is also offered), and the ridges formed into the top panel make an attractive design element that adds to the model’s tactility.

Across the front, the Power Plant is more typical: a large volume knob on the right, and to its right a headphone minijack. From the left, a power button (it lights up blue) and five input buttons (red). Two more buttons that support monitoring a recording and muting, and another pair next to that, with one button for bypassing the recessed Bass and Treble controls, and another for activating the Loudness switch, which gives the unit’s output a contoured volume boost. Lastly, there’s a Balance control.

I experimented with all of these options. But it seems the T+A engineers couldn’t quite bring themselves to allow full-range equalization -- the tone controls are deliberately limited, useful for only slight touchup to, as the manual states, “avoid unwanted coloration in the critical midrange sound.” I preferred to run the E-Series Power Plant Balanced with its Loudness switch turned on, feeling it gave me access to a clearer soundstage and a wider, richer dynamic range.

The rear panel is arranged with the same logical elegance as the front: five analog inputs, including one for a phono stage (not included) and another for a recorder (with accompanying output jacks), as well as two separate balanced inputs (located on their own circuit board). There are also a preamp output to connect a subwoofer or separate power amp, a single set of clear plastic speaker-binding posts, an RS232 interface and an E-Link input, a power switch, and the socket for the substantial power cord.

Of significant importance to my purposes was the input socket for the Power Plant’s remote-control sensor, which is necessary in the absence of the matching Music Player Balanced, which includes a CD transport. The sensor, about the size of a pillbox and tethered by a 9’ cord, worked well enough for muting, volume control, switching inputs, and powering on and off. The remote control itself was a bit disappointing in its generic design and plastic multipurposefulness, its look suggesting the sort of thing that comes with the DVR supplied by your cable company. Inside the Power Plant Balanced is a toroidal transformer that enables the unit to output 140Wpc into 8 ohms.

Switching out the Raysonic SP-300 for the E-Series Power Plant Balanced was easy as pie. And since most of my listening these days is done via my iPod Classic 160GB loaded with files ripped from CD to the Apple Lossless format, much of my listening at first centered around calibrating the iPod’s output with the Power Plant’s appropriate volume level.

Since I leave the iPod at one setting for walking around listening, I’m reluctant to ramp it all the way up when listening at home. I found that with the Power Plant Balanced I didn’t need to set the iPod’s volume to maximum. With the amp’s volume set at about 10 o’clock, just a little increase sounded best. Physical media were handled by my trusty Pioneer DV-353 DVD player, connected with Monster Interlink 200s. I experimented with two pairs of speakers: Axiom M22s, tilted up but coupled to the floor; and Bowers & Wilkins 302s, set on 28”-high Target stands, the speakers about 2’ from the front wall and 8’ apart.

I spent several weeks alternating between the B&Ws and the Axioms. The B&Ws are livelier, as well as sentimental favorites, but the Axioms offer deeper bass from their pairs of midrange-woofers. Over time I decided that the M22s were the better match. The Power Plant Balanced had the power to drive the slightly more demanding Axioms, as well as the dynamism to make the most of their bassier capabilities.

Neither the B&W nor the Axiom is the best speaker I’ve ever had in my system. I could live with either, but since I have both, I don’t have to choose. For most of the time the E-Series Power Plant Balanced was in my system, I left the Axioms where they were and the B&Ws in the closet.

But I began with the B&W 302s. The E-Series Power Plant Balanced delivered a smooth, easy sound and a steady, confident pace that never wavered. I set the T+A to Flat (i.e., Loudness circuit off) and the iPod to Shuffle, and the first track that turned up was “Tangled Up in Blue,” from Bob Dylan’s Blood on the Tracks (16-bit/44.1kHz ALAC,Columbia). My room was filled with the sound of Dylan’s voice and the backing instruments of this studio track. I’ve heard several different versions of this song, cut at various times during Dylan’s career in different contexts, but the Power Plant Balanced brought something new to this, the first version to be released: spaciousness, with an immediacy borne by the amp’s tendency to highlight the sonic attributes of any given track.

Next up was the Gershwin brothers’ “Our Love Is Here to Stay,” from Ella Fitzgerald and Louis Armstrong’s Ella and Louis Again (16/44.1 ALAC, Verve). Beginning with Armstrong’s rasp, the Power Plant swung the rhythm section, led by Oscar Peterson on piano, then ably handled the transition from Armstrong’s gruff sweetness to Fitzgerald’s just-plain sweetness. Her mellifluousness jumped from the Axioms with a clarity I hadn’t heard when they were hooked up to the Raysonic tube amp. The Power Plant Balanced gave the B&Ws just what they seemed to need.

From swinging to sensitive, the Power Plant Balanced handled “Come Here My Love,” from Van Morrison’s Veedon Fleece (16/44.1 ALAC, Polydor), with delicacy and gentleness. This integrated performed a magic trick: It slammed when it needed to slam, and when it needed to call on the pace and rhythm of the human heart, that heartbeat rhythm is what it gave me. And when presented with a track, such as this one, that calls for an ascetic suspension, a hovering of the music in the room with a fragility that verges on breaking, it supplied the necessary levitation, holding the music in the air as Morrison wrapped his voice around the musicians like a ribbon.

At this point, whether due to impatience or a hunch, I switched from the very involving B&W 302s to the Axiom M22s. The Target stands put the 302s’ tweeters at ear level, but the Axioms are an odd height: smaller than floorstanders, but too tall for even my 17” stands. I find that the Axioms sound best when sitting on the floor, whose hardwood anchors the bass, but tilted upward to balance their treble. 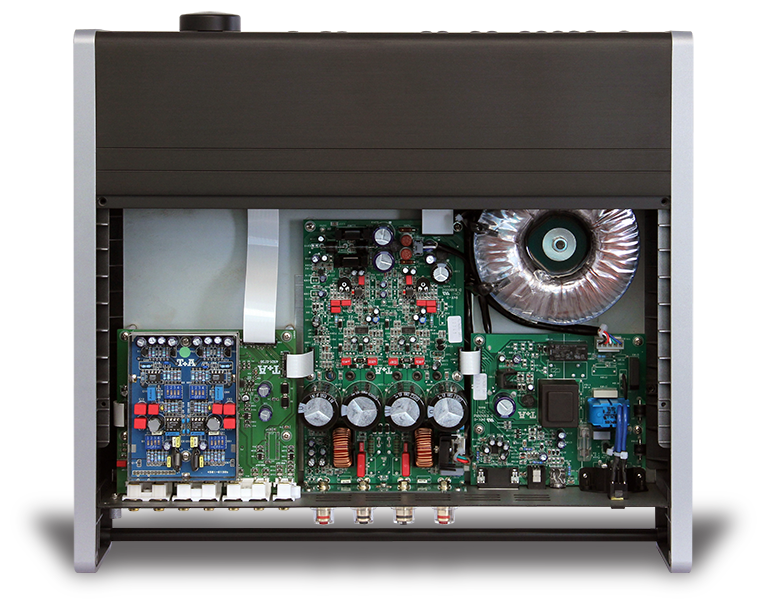 But my thirst for bass didn’t stop there. I’ve always been partial to a Loudness switch when offered. Why that feature isn’t factored into an integrated’s foundational voicing, I’m not sure, but a Loudness switch, which bolsters the lower end and gives more volume to its volume, satisfies me both aurally and psychologically. I like to keep my volume knob at about 9 o’clock; certainly not past 11. It makes me think I’m showing admirable restraint, and tells me that my amp is holding back, with as much in reserve as I could ever ask for.

With its Loudness contour engaged, the Power Plant Balanced’s images were rounder, fuller, more three-dimensional -- more aggressive when appropriate, with more precise imagery, its faster transients making for a sound that was both snappy and exciting. For example, Ryan Adams’s Cold Roses (CD,Lost Highway 4343-2) is beautifully recorded -- it’s a tad hot, but it’s vibrant and alive, with a wonderful rendering of space around and among the instruments and Adams’s voice. In the title track, the sound was fast, tight, and detailed. Thanks to the Loudness contour, the top end was more assertive and the overall sound was warmer, if slightly less resolved. But with the Power Plant Balanced, the Axiom M22s, and Loudness on, I’d found the optimal combination of elements.

Next up was “City of Blinding Lights,” from How to Dismantle an Atomic Bomb, by the boys who wrote the book on anthemic transcendence: U2 (CD, Interscope 3613-02). The Power Plant Balanced fully rose to the occasion in terms of extension, texture, and finesse, and its sound was seamless -- from the punch and thrust of its crystalline top end to its reproduction of the drive of Adam Clayton’s bass. Its attack was just right, with excellent high-frequency transient response emerging from a black backdrop.

On more subtle fare, such as the insinuating “Clap Hands,” from Tom Waits’s Rain Dogs (CD, Island 90299) -- from 1985, before his voice went completely over to gravel -- the percussion was rendered with messy vitality but an obvious unity that made me feel simultaneous senses of equilibrium and revelation. The Power Plant Balanced allowed “Cigarettes and Coffee,” from The Otis Redding Story (CD, Atlantic 81762), to be familiar yet new, and provide pleasure as well as serenity. The song was ordered and novel, conveying Redding’s intensity along with his late-night repose.

I cranked it for “Chelsea Rodgers,” from Prince’s Planet Earth (CD, NPG 129700). Its power was instantaneous, the attack was speedy, and under the control of the Power Plant Balanced the Axioms never sounded brittle or overwhelmed. Instruments were layered in three dimensions, resulting in transparency, and tonal and textural finesse.

This clarity continued through “Central Two-O-Nine,” from Robert Plant’s Band of Joy (CD, Rounder 9099). The recording, directed by producer extraordinaire Buddy Miller, maintained the highest level of dimensionality, free from distortion and brimming with purity, harmony, and articulation.

In some respects, the Power Plant Balanced favored richness of meaning over clarity of meaning. This is not to say that it was compromising or ambiguous. Quite the contrary --like a painter who explores abstraction only after mastering representation, the T+A used technical precision to reveal the emotion behind my best recordings.

This was never more apparent than when I listened to the live version of “Calvary Cross” included as a bonus track on a reissue of Richard Thompson’s I Want to See the Bright Lights Tonight (CD,Island 981790-7). The sound of this track is far from pristine. The Power Plant Balanced, however, stayed with the performance every step of the way, as Thompson delivers the lyric, then moves away from it to build his guitar solo over the next six or seven minutes, his ideas accumulating as steadily as the tension mounts. The track is a journey, and the Power Plant Balanced proved itself a worthy guide.

Sure, tube amps are likely to make your music sound smooth and welcoming and warm. But such amps are entirely impractical, what with their fragility, sonic inconsistency, ridiculous weight, and the amount of heat they generate. T+A Elektroakustik’s E-Series Power Plant Balanced is the finest piece of electronics I’ve ever had in my system, exerting a beautiful control over a wide range of musical demands: It can play loudly without strain, or quietly with force and solidity. In very little time, I fell in love with the E-Series Power Plant Balanced’s speed, grip, tautness, and punch. And it never felt warm to the touch, and never broke a sweat. Truly, it is one cool customer -- an integrated amp for all seasons.