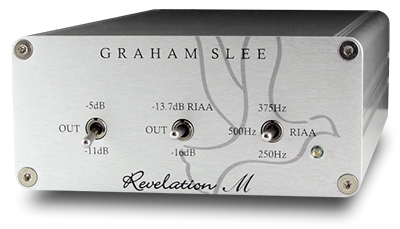 It’s hard to believe that over ten years have passed since Graham Slee Projects launched the Era Gold V phono preamplifier. With its small size, restriction to moving-magnet cartridges, wall-wart power supply, and unassumingly pedestrian appearance, the Era Gold V won over both vinyl enthusiasts and reviewers alike. Steady improvements in the Era Gold V’s cosmetics and sound have kept it at or near the top of the $1000 phono preamp category.

That wasn’t enough to satisfy Graham Slee. He’s introduced a plethora of phono stages in the decade since, including two based on the Era Gold V: the Jazz Club, which boasts a choice of equalization curves for non-RIAA records; and the Reflex, a super-tuned upgrade.

GSP produces two versions of the Revelation: the M, for moving-magnet cartridges, and the C, for moving-coils. They differ in the amount of gain they produce for their respective cartridge types. An MC head amp, the Elevator, is also available, should you start with an MM cartridge but later move to an MC.

For most folks, the availability of two versions won’t be the Revelation’s most notable feature. That honor goes to its adjustable, non-RIAA EQ curves, a feature that, as far as I’m aware, isn’t available in any other comparably priced, current-production phono preamp. Three front-panel toggle switches select among various combinations of turnover and rolloff frequencies to produce a total of 15 replay curves. The Revelation’s manual includes EQ tables listing the correct switch positions for various labels and standards, such as Decca/London, HMV, and NAB. And the correct switch positions for RIAA playback are clearly labeled on the front panel -- a nice touch.

One feature of the Revelation that’s common to all GSP phono preamps is its use of active equalization. Most modern phono preamps use an RC or LCR network to achieve various levels of attenuation across the audioband to arrive at the proper RIAA curve. Commonly known as passive EQ, these networks can be found inside phono preamps across a wide range of price and quality.

With active equalization, however, the frequency response is contoured to fit the RIAA curve’s profile by varying the negative feedback brought back to the input. On GSP’s website, Slee touts active EQ’s many virtues, including consistent overload margins, naturally attenuated LP pops and ticks, and the ability to use smaller capacitors with higher voltage ratings for better frequency linearity. The proof is in the listening, however. 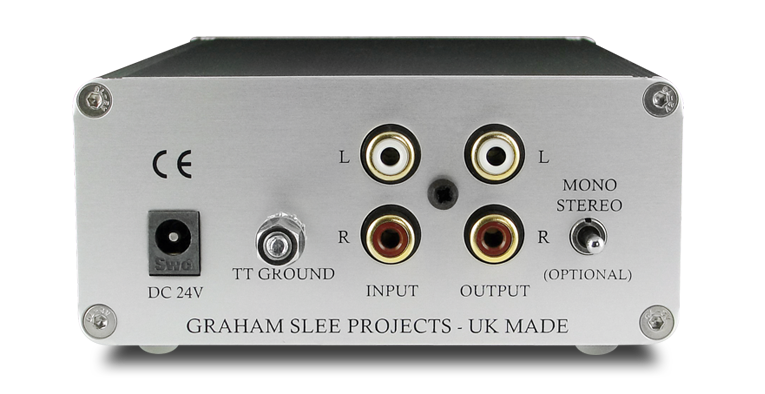 The Revelation M has some other unique features that revolve around what Slee calls their ultralinear, fast-active technology. This includes favoring ultrawide bandwidth, carefully selecting ICs, rejection of bipolar transistors, and trying to achieve symmetrical small- and large-signal slew rates. Slee claims that the result marries tubes’ traditional sonic benefits to the reliability of solid-state.

The Revelation M also has, on its rear panel, a Mono/Stereo toggle switch -- an indispensable feature, in my opinion. The middle position provides stereo listening, while the up and down positions sum to mono. Since a good chunk of my classical and jazz LPs (not to mention a lot of my Beatles records) were recorded in mono, it’s nice to have the solid, locked-in center image that a mono switch can provide.

For MC cartridges, GSP suggests partnering the Revelation M with the Elevator head amp. In their view, this will give the best sound the company offers for low-output cartridges. Though I was tempted to request a sample of the Elevator for review, I decided to evaluate the Revelation M with my own custom-made Sowter 9570 step-up transformer, for the sake of familiarity.

The Revelation M sounded a little rough fresh out of the box. Per Graham Slee’s recommendation, I decided to let it break in for at least 500 hours before doing any serious listening. My patience was rewarded: When those 500 hours were done, I immediately knew that the Revelation M was something special. This unassuming little phono preamp impressed me with its wide bandwidth, excellent timing, and overall smooth tonal balance. When I spun Radiohead’s epochal Kid A (EMI 529590), the Revelation M reproduced with equal aplomb the full spectrum of deep, resonating synth bass in “Everything in Its Right Place” and the clean, delicate cymbals of “In Limbo.” In fact, the Graham Slee’s treble extension and smoothness were some of the best I’ve heard from a reasonably priced phono stage.

Once the tempo picked up a bit, as it does in “Idioteque,” also from Kid A, the Revelation M displayed its fine sense of timing. The beat was more rhythmically nimble and propulsive, making for a solid foundation for this tune’s dance-friendly vibe. From hip-hop to house to hypnotic electronica, the Revelation M’s uncanny lock on the music’s timing made for highly enjoyable long-term listening.

Voices through the GSP also sounded detailed, clear, and distinct -- following Thom Yorke’s often subtly syncopated phrasing in Kid A was effortless through the Revelation M. But it wasn’t till I played Jesse Sykes and the Sweet Hereafter’s Reckless Burning (Devil in the Woods 085) that I was able to hear just how detailed and refined the Revelation M could be through the midrange. Sykes’s complex voice is full of richness and power, with a whisper-like subtlety and rasp, all at the same time. The M completely nailed Sykes’s vocals, delivering her sound in a way that approached hearing her in concert.

Since there’s more to music than rock’n’roll, I played many classical and jazz records as well, including Fritz Reiner and the Chicago Symphony’s recording of Rimsky-Korsakov’s Scheherazade (RCA Living Stereo/Classic LSC-2446), to find out how well the Revelation M handled more complex and challenging fare. The GSP had the sort of pleasingly rich, well-developed tonal character I usually associate with good tubed gear. Woodwinds and strings had all of their attack, sustain, and decay intact and were reproduced in their full measures, the Revelation M doing a fine job with the more delicate instrumental timbres. 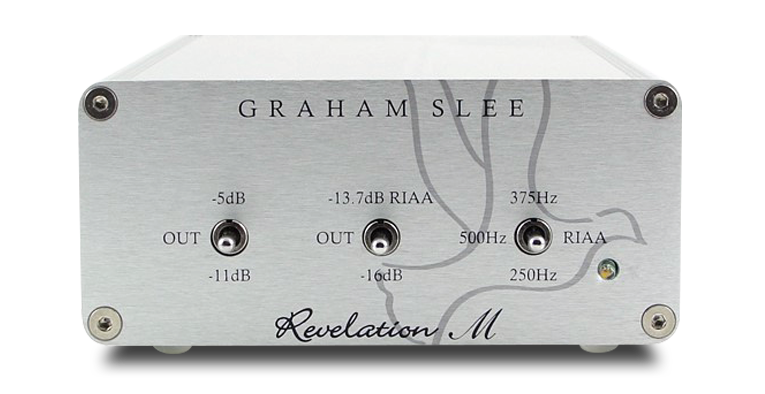 It was while listening to the Scheherazade that I became aware of a couple of the Revelation M’s less obvious strengths: its wide dynamic range and its composure in complex passages. In the final movement, Festival in Baghdad; The Sea; Shipwreck, the Revelation M tracked both micro- and macrodynamic changes with ease. While some other, considerably more expensive phono stages can do better still, the Slee never left me wanting more in this regard. Even through the loudest climaxes, individual instrumental lines remained audible, and the GSP delivered the movement’s dynamic impact as can few others in its price range. And when it came to reproducing smaller-scale changes, such as those in the second movement, The Story of the Kalander Prince, the Slee has almost no peers.

So far, all of my comments regarding the Revelation M’s sound have to do with its reproduction of recordings made with the RIAA curve -- but what about those other curves? After all, it’s the Revelation M’s adjustable EQ that sets it apart from its competitors. I began by listening to Tommy Dorsey’s All Time Hits, a 10” LP from 1951 (RCA Victor LPT-15), adjusting the Revelation M’s turnover and rolloff switches until I heard the flattest frequency response possible.

Immediately, this record sounded noticeably more open in the midrange, with much less congestion and chestiness in Frank Sinatra’s voice. His subtle vibrato and lithe phrasing from those early Dorsey days came through clean and clear, with previously unheard details intact. Brass, too, had significantly better bite and extension, and double bass sounded much less humpy and thumpy than it had before I adjusted the EQ. I could now follow the bassist’s tuneful, articulate lines with an effortlessness not experienced before the Revelation M.

After that I played as many pre-RIAA records in my collection as I could, including a good selection of old swing and classical LPs. What became abundantly clear with the Revelation M in the chain was just how much music I’d been missing from these old records, and how much more enjoyable they could be. Having the ability to balance the sound as best as possible for some of my oldest and most treasured records has added so much to my listening experience that I can’t see ever going back to an RIAA-only phono stage.

Though the Revelation M is unique, that doesn’t mean it’s completely without competition. The Juicy Music Tercel II with LOMC transformer option ($999 factory direct when last available), which I used to own, is an excellent value in its own right. The Tercel II is a three-tube, zero-feedback, passive RIAA design with one 12AX7 and two 12AT7 tubes, and Jensen step-up transformers for MC gain. It served as my reference phono stage for quite a few years, thanks to its relatively extended and neutral spectral balance, huge soundstage, and overall more modern take on tube sound.

In comparison, tonalities sounded slightly less saturated through the Revelation M than through the Tercel II, and the Graham Slee’s bass was somewhat less fulsome than the tubed unit’s. But the Revelation wasn’t missing anything in the bass, and I strongly preferred its greater agility, articulation, and speed in that region. In fact, I’ve come to think of the Tercel’s bass as being slightly bloated and just a bit too chunky in comparison; and the GSP’s speed and timing ability made the Tercel II sound slightly slow.

The Tercel II’s soundstage was noticeably bigger than the Revelation M’s, but the latter countered with more sharply defined, more holographic imaging. Listening to Madeleine Peyroux’s Careless Love (Rounder/Mobile Fidelity Sound Lab MFSL1-284), it was much easier to picture the musicians performing right in front of me, with a reach-out-and-touch quality that even the tubed Tercel couldn’t match. The overall effect made for a more complete listening experience.

These are two highly competitive models, each an excellent value in its way. While I enjoyed some of the added tonal richness the Tercel II brought to my records, ultimately I preferred the more complete sonic picture the Graham Slee painted in terms of the detail it extracted and its outstanding timing. Plus, the selectable EQ curves were a huge bonus for extracting everything possible from the oldest records in my collection.

The Graham Slee Revelation M is a honey of a phono preamplifier that goes about its business in the most musical and musically honest way I’ve yet heard from a ca. $1500 model. It effortlessly serves up a captivating mix of tube-like tonality, wide bandwidth, foot-tapping timing, class-leading imaging, and reproduction of microdynamics.

I’ve been living with the Revelation M for well over a year now and can’t come up with a single caveat -- and I’ve tried my damnedest. Yes, you can undoubtedly do better if you spend more. But regardless of what cartridge, turntable, and/or amplification I partnered the Revelation M with, the little wonder was always up to the challenge, consistently delivering a complete and eminently enjoyable music experience from any record in my collection.

In short, it’s a phono stage that’s as easy to shell out the ducats for as it is to enjoy. Add the immense improvement in sheer musicality that can come from judiciously using those selectable EQ curves, and it’s a no-brainer. Perhaps that’s the Revelation M’s most defining quality: Its ability to consistently deliver musical joy, record after record, night after night, RIAA LP or otherwise. If getting the most musical and sonic goodness from your cherished LPs (or shellacs!) without breaking the bank is important to you, give a listen to the Revelation M. You just might fall in love with it, as I did. And maybe you’ll buy one -- as I did.