Musical Fidelity’s V90-DAC is part of the company’s reasonably priced V90 line, which includes the recently reviewed V90-AMP integrated amplifier, the V90-HPA DAC-headphone amp, the V90-LPS phono stage, and the V90-BLU Bluetooth receiver, for sending music from a smartphone or tablet to a sound system. Each model comes in a nice, champagne-toned aluminum case measuring a petite 6.5”W x 1.7”H x 4”D.

The front panel of the V90-DAC ($299.99 USD) has two small toggle switches: Power On/Off, and a three-way Input switch with settings for USB, Coax/Optical 1, and Optical 2. Two tiny LEDs alert the user when the power is on and when the V90-DAC has locked to a digital signal.

On the rear panel are, from left to right: analog outputs (RCA), a USB input (Type B), a coaxial input (RCA), two optical inputs (TosLink), and a small jack for DC from the wall-wart power supply. All very simple and neat.

Musical Fidelity’s charming founder and guiding light, Antony Michaelson, told me that the V90-DAC was designed to be the equivalent of DACs that cost hundreds of dollars more, and “is at the edge of the state of the art, if not the state of the art itself,” for the price. He said that he and his staff set “extremely ambitious design criteria” for the V90-DAC, with the goal of providing “the maximum electronics for the minimum price. It builds on its predecessor, the V-DAC, and improves on that [model]’s performance.”

The V90-DAC converts whatever digital signal it receives to 32-bit/192kHz. USB inputs are limited to 24/96, as is the case with many inexpensive asynchronous USB DACs. The V90-DAC is backed by a two-year warranty on parts and labor.

It couldn’t be much simpler to install: Connect the input, output, and power cables. Turn on the power. Watch the little blue power LED come on. Select the input you want. Look for the digital-lock LED to turn from red to green. My PC loaded the supplied driver in about ten seconds. We were off and running.

My initial listening session was via USB and began with two tracks from the 2L-TWBAS 2012 Sampler (24-bit/176.4kHz FLAC downconverted to 24/96, 2L/SoundStageRecordings.com). The first track was the Norwegian Armed Forces Staff Band performing Eugène Bozza’s Children’s Overture -- a great recording of an interesting piece of music for winds and percussion. Through the V90-DAC the sound was very crisp, especially transients. The trumpets, in particular, sounded extremely lifelike and natural. The bass-drum strokes had no slop, just the initial boom and subsequent decay.

Then I played the Allegro affetuoso (La Notte) of Ole Bull’s Concerto Fantastico, with solo violinist Annar Follesø and the Norwegian Radio Orchestra conducted by Ole Kristian Ruud. This all-out performance includes lots of crescendos and diminuendos, all handled beautifully by the Musical Fidelity. The solo violin sounded fantastic: the part calls for very enthusiastic playing, and through some DACs I’ve used Follesø’s instrument can sound shrill. That was not the case here. It was strident, but that’s what I believe Bull wanted. This is a riveting performance.

I almost always test digital components with “Bali Run,” from Fourplay (24/96 FLAC, Warner Bros.). Fourplay comprises Lee Ritenour on guitar, Bob James on keyboards, Nathan East on five-string electric bass, and Harvey Mason on drums. Ritenour and James constantly weave contrasting yet complementary melodies, while East’s percussive and prominent bass line puts components through their paces. There’s a lot of chance for the music to smear, but I heard none of that with the V90-DAC. However, much to my surprise, the musical balance changed from what I’m accustomed to hearing -- this time, the high guitar notes at the end of the track were more subdued, the piano a bit more out front. 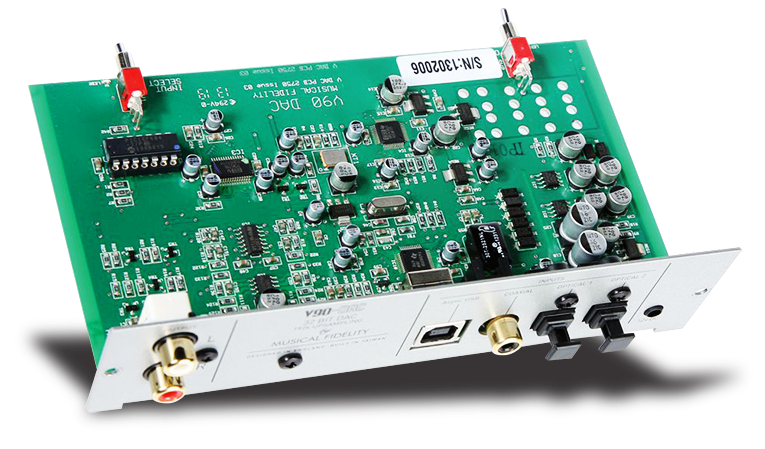 Diana Krall’s version of “Frim Fram Sauce,” from All for You: A Dedication to the Nat King Cole Trio (16/44.1 WAV, Impulse!), sounded as if it was recorded in a very large space redolent of CBS Records’ famous (and ginormous) 30th Street Studio, in Manhattan. I heard lots of natural echo from Krall, and the instruments seemed suspended in space. Her voice was, as usual, rather breathy (on her it sounds good). Russell Malone’s guitar was slightly behind and above Krall’s voice and piano, while Paul Keller’s bass was even farther back, just as it should be.

Speaking of 30th Street, that’s where Tony Bennett recorded most of his albums for Columbia. From his Fifty Years: The Artistry of Tony Bennett (16/44.1 WAV, Columbia/Legacy), I pulled up “I Wanna Be Around,” one of his hits from the mid-1960s. His voice is well out in front, bathed in natural echo. The piano, off to the left, tinkles delicately; the orchestra, behind, lightly accompanies until the end of the song, when, as Bennett does his final riff, a trombone comes in like gangbusters with a flourish. This track sounded more sparkling (in a good way) and clear through the V90-DAC than I’d ever heard it. By comparison, my HRT MusicStreamer II+ had a little less output at the very highest end of the audioband, but very meaty bass. The V90-DAC met that bass performance, and aced out the competition with its better highs.

To test the V90-DAC’s coaxial input, I used CDs played in Cambridge Audio’s Azur 650C CD player. Creature of habit that I am, I again began with Fourplay’s “Bali Run.” This was another ear-opening reproduction of a tune I’ve used in reviews for at least 15 years. The already strong bass line had more heft than usual, and a round, full tone. The keyboards and guitar again were presented in very detailed, layered sound, and the cymbals had a nice touch of air around them. Very satisfying!

Next, I wanted to get an idea of how the DAC sounded with “serious” music. First up was Leopold Stokowski’s arrangement for orchestra of J.S. Bach’s “Little” Fugue in D Minor, with the Cincinnati Pops Orchestra led by its founding conductor, the late Erich Kunzel (CD, Telarc CD-80338). I’m quite familiar with the sound of the recording venue, Cincinnati’s Music Hall, and felt the V90-DAC got it just right. The opening oboe simply floated, stationary, before me, slightly off in the distance, as if I were sitting in the first balcony. The strings were all of a piece, massed yet distinct. 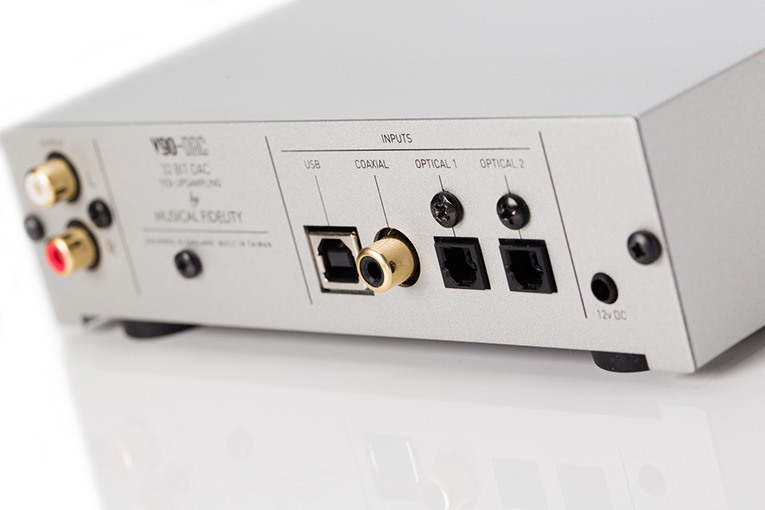 The second example was the overture to Leonard Bernstein’s Candide, with David Zinman leading the Baltimore Symphony Orchestra (CD, London 452 916-2). This is a very different-sounding recording -- the BSO’s home, Meyerhoff Orchestra Hall, has a much drier sound than Cincinnati’s Music Hall, as I came to learn in my ten years of attending subscription concerts there while I lived in Maryland. This was evident in this work’s prominent brass parts; through some other systems, the trombones can sound blatty. Not here -- the V90-DAC got it right. If the Musical Fidelity committed any sin, it may have been a somewhat greater amount of reverb than I’d noticed before with this recording.

Most of my listening is to jazz and pop vocals, so I pulled out discs by Diane Schuur and Frank Sinatra. Schuur’s voice is powerful, with a wide range whose top notes can sound shrill -- if anyone’s voice can break glass, it’s hers. In “I Just Found Out About Love,” recorded before an appreciative audience for Diane Schuur & the Count Basie Orchestra (CD, GRP GRD-9550), she hits some high notes near the end that I’ve heard sound awful -- screechy and annoying. Through the V90-DAC they were strong and loud, but not screechy. There wasn’t even a hint of overload.

Sinatra was in great voice when he recorded for Capitol in the late 1950s. “Come Fly with Me,” from Classic Sinatra (CD,Capitol 5 23502 2), arranged by the great Billy May for their first album together, of which this was the title track, just plain swings! Again, the major difference I heard in the sound of this track through the V90-DAC was a little more air around the performers, bringing the natural sound of Capitol’s enormous Studio A, in Hollywood, just a little more to the fore.

To use one of the V90-DAC’s optical inputs, I had to swap out the Cambridge 650C CD player for a Sony CDP-CE375, a carousel model with the necessary optical output. I played the same musical selections. In four of five cases, the V90-DAC, in my opinion, sounded truer to the original performance and recording venue than did the Sony’s analog output. Only with the Diane Schuur did I consider both models to have nearly equal sound quality.

I liked Musical Fidelity’s V90-DAC. I felt it offered a level of performance that other similarly priced DACs have not quite attained in my system. Its sound was robust and full, with a delightful sense of air. Over the past few years I’ve heard any number of DACs, mostly due to a friend’s quest for one whose sound he might really like. I think the V90-DAC is the best I’ve heard -- and it’s a total bargain. If you’re looking for a good, solid, reasonably priced, well-designed and -engineered, high-performance outboard digital-to-analog converter, I can’t think of a better buy.