It’s easy to look at a small integrated amplifier and scoff. Consider something like NAD Electronics’ 40Wpc C 316BEE, or Arcam’s 50Wpc A19 -- compact, not terribly impressive-looking components thoroughly lacking in style, and sounding excellent. But go smaller still and it’s difficult to picture a tiny, inexpensive, class-D integrated amp powering a pair of real loudspeakers. That’s the province of big class-AB designs adorned with heatsinks and having substantial power supplies.

A few years ago, NuForce’s DDA-100 changed all that. The 2.64-pound -- 2.64! -- integrated amplifier-DAC retails for $549 USD, and offers 50Wpc of minimalist class-D brawn and several digital inputs. Most important, it sounded fantastic -- far better than I’d been aware could be had for under $1000. NAD then reimagined its legendary 3020 integrated amplifier as the D 3020, a class-D integrated amplifier-DAC that develops 30Wpc, and also includes analog inputs, aptX Bluetooth wireless connectivity, a subwoofer output, and a headphone amp -- all for $499.99.

Monitor Audio, a British company with decades of experience designing and making loudspeakers, has entered the mini-integrated-DAC fray with its Airstream A100 ($499.99). It might be easy to prejudge Monitor’s freshman effort in amplifier design as little more than a me-too product, as I did when I was ushered into the company’s suite at the 2014 Consumer Electronics Show, in Las Vegas. Like the NuForce and NAD before it, the Monitor is a small, lifestyle-size model. Unlike them, it trots to a different, perhaps more sophisticated beat.

Also of interest is Monitor’s choice of wireless connection, Apple AirPlay, which is limited to the transmission of 16-bit/44.1kHz signals. Those who want to bypass a router and have a direct wireless connection between their Apple device and the A100 can use Monitor’s Airstream Direct functionality. As I understand it, the A100’s omission of Bluetooth is due to Apple’s insistence that its proprietary AirPlay standard not be offered alongside the competing Bluetooth standard. Apple has since relaxed their stance, but no matter: DLNA is included, so that Apple and non-Apple products can transmit content to the A100 via third-party applications -- and DLNA handles resolutions up to 24/192. 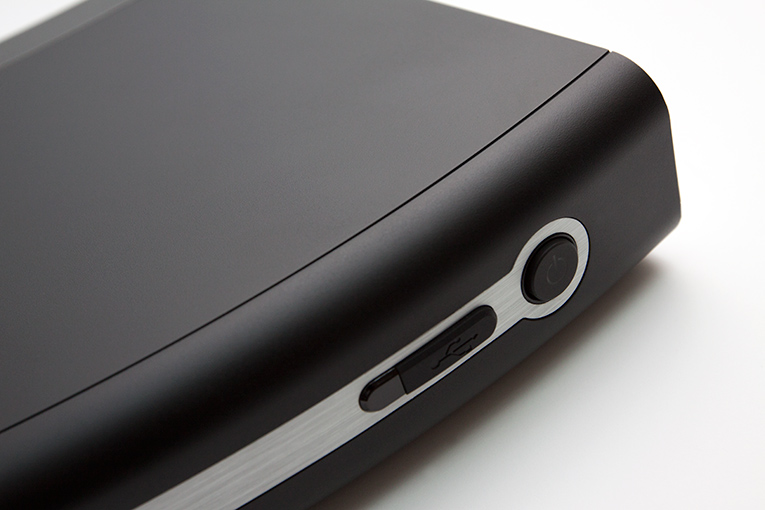 The A100’s connections include: a single optical input limited to 24/96; analog RCA jacks, one input and one output; and a front-mounted USB Type A port. The analog inputs run straight through to the loudspeaker terminals without digital conversion. The USB port is for charging and Wi-Fi setup, and will work as a digital input with iOS-based devices. The included pamphlet outlines a super-easy way to quickly install the A100 in a wireless network via the USB port. Less friendly are the A100’s spring-loaded binding posts. Spade lugs are nonstarters, as will be some banana plugs. Due to the A100’s tapered rear panel, the outer posts are a bit more obstructed by the case than the inner ones, and since the posts must be accessed from the side rather than head on, wiring can be a little tenuous. Bare wire is likely the easiest solution. 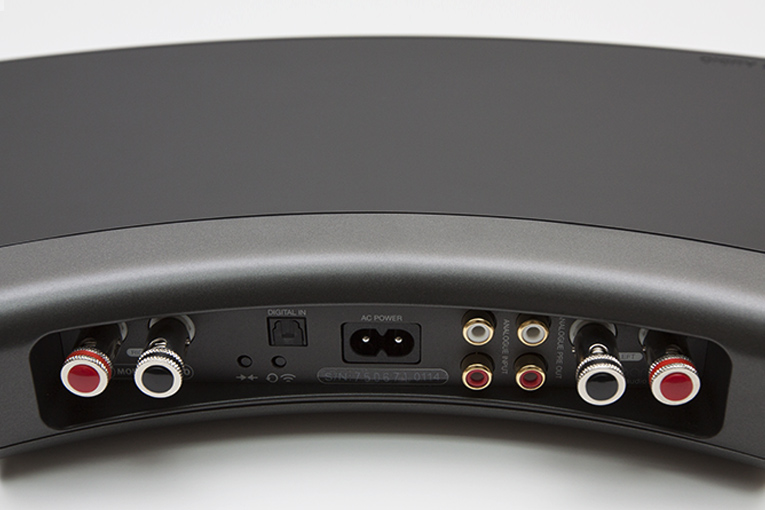 The A100’s handsome case, available in black or white, can be laid flat or set on end, the latter orientation aided by a plastic platform (included). With the exception of its top panel, made of a composite material that allows the built-in Wi-Fi antenna to “see,” the A100 is made entirely of aluminum. In effect, the entire case acts as a heatsink for the class-AB amp, which runs hotter than any class-D design, though in daily use it was only ever warm to the touch. The Monitor folks explained to me that they chose class-AB specifically on performance grounds -- as was the choice of Cirrus Logic’s flagship CS4398 DAC chip to handle the conversion of digital signals to analog. It seems that the Airstream A100’s circuitry was designed by someone who previously did work for Arcam and Cyrus, two firms with strong pedigrees in amplifier architecture.

Also included is a funky, almond-shaped remote, and while it never sits perfectly flat, it worked well, and is more substantial than the miniature credit-card-style remotes included with other budget products -- so all credit to Monitor on that front. It can stop and start whatever is playing through the AirPlay input, which is neat. Short of the binding posts, my only complaint about the A100’s design is the LED that tells you which input is active: blue for AirPlay, purple for Airstream Direct, white for optical and USB, green for analog. It was bright enough to be distracting when I listened in a totally darkened room. This is the smallest of nitpicks, however, in an otherwise well-thought-out product. 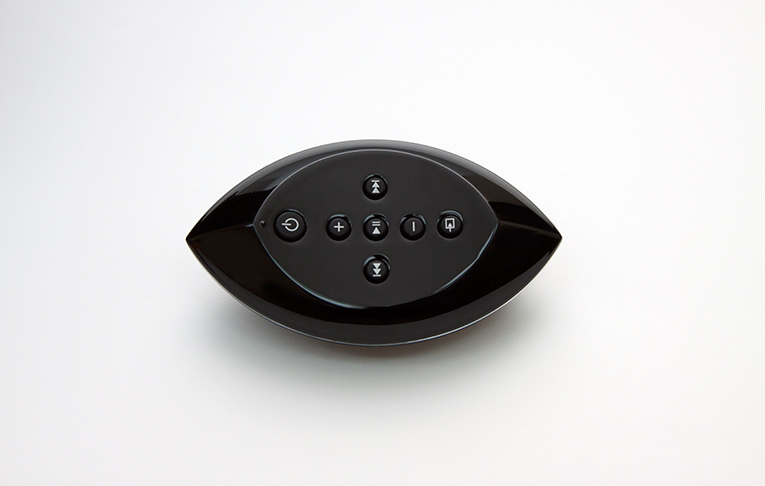 I sat the Airstream A100 atop a bookcase, attached Amphion Ion+ bookshelf speakers to it, and ran it pretty hard for several months before installing it in my main system with my reference KEF R900 loudspeakers. I never had a problem with it. It was only when I moved down to the A100 from my reference Hegel Music Systems H300 integrated-DAC that I so appreciated the ability to turn an amp off and on via its remote control . . .

Some audio products blow you away with detail; others lull you into a relaxing stupor with a smooth, sultry sound. Monitor Audio’s little Airstream A100 struck a fine balance, confidently striding precisely between these two camps. I was smitten by its sound -- at once rich yet detailed, smooth but with a hint of sparkle, and surprisingly neutral. If the A100 deviated from linearity at all, it was by being ever so ripe in the bass -- for me and, I suspect, many other listeners, a welcome characteristic in an amplifier. Poorly and cheaply amplified bass sounds plodding and ponderous, and I was worried that this inexpensive, flyweight box, outputting only 50Wpc, might not be able to drive my big floorstanders well enough to produce the bass depth and control needed to properly energize my room. I was floored when it managed to do both. When I played Lorde’s monster hit, “Royals,” from her Pure Heroine (16-bit/44.1kHz ALAC, Virgin EMI), the A100 grabbed the 8” woofers of my 90dB-efficient KEFs and forced them to dig deep. In this regard, the A100 was ear-opening.

It wasn’t just the A100’s bass that was so impressive. The midrange was beautifully weighted, neither forward nor recessed, and the Monitor’s built-in Cirrus DAC did an impressive job of unraveling low-level detail. Regina Spektor’s lithe vocals in “Fidelity,” from her Begin to Hope (256kbps MP3, Sire), were spry and clean, with very little of the haze and muddle that so often plague inexpensive all-in-one designs. On the contrary, Spektor’s voice was portrayed on the soundstage with reasonable precision and surprising clarity. She flits about in the chorus in spritely fashion, and the Monitor well kept pace while apportioning her the appropriate sonic weight and heartiness -- a threadbare sound this was not. Even if the finest of details eluded the A100 -- after all, it costs only $499.99 -- it was far more articulate through the mids than I ever would have expected. 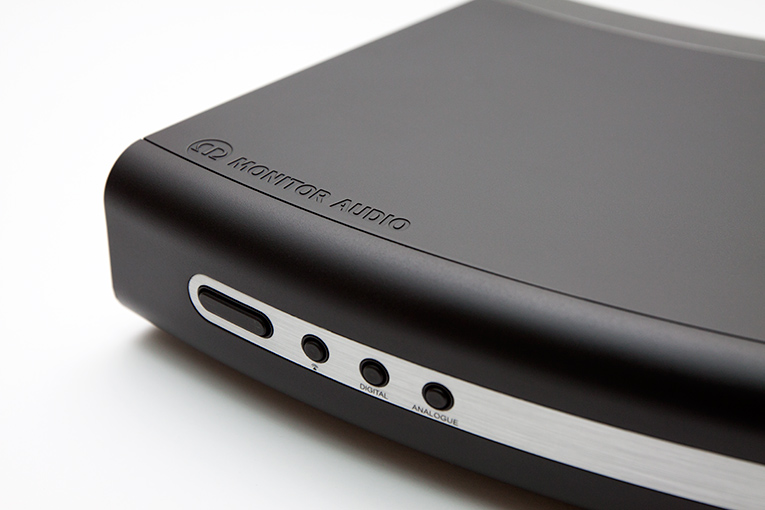 Underground English artist Burial’s eponymous, experimental first album (16/44.1 WAV, Hyperdub) comes across as rather miasmatic to most listeners. A rhythmic, ultimately dark and meditative work, it combines elements of dubstep, 2-step, and ambient genres into a mildly disjointed, introspective whole. Its relatively hot-sounding mix offers a wide variety of sounds for audiophiles to feast on, in an aural repast best enjoyed loudly and brashly. Through the A100, the highs in such tracks as “Distant Lights” and “Gutted” lacked the sparkle or shimmer they have through some significantly more expensive class-AB amps. In many respects, the A100 sounded like a baby Devialet, which is about the highest praise I can muster -- there was an intrinsic “rightness” in the timbres of voices, instruments, and even high-frequency transients. 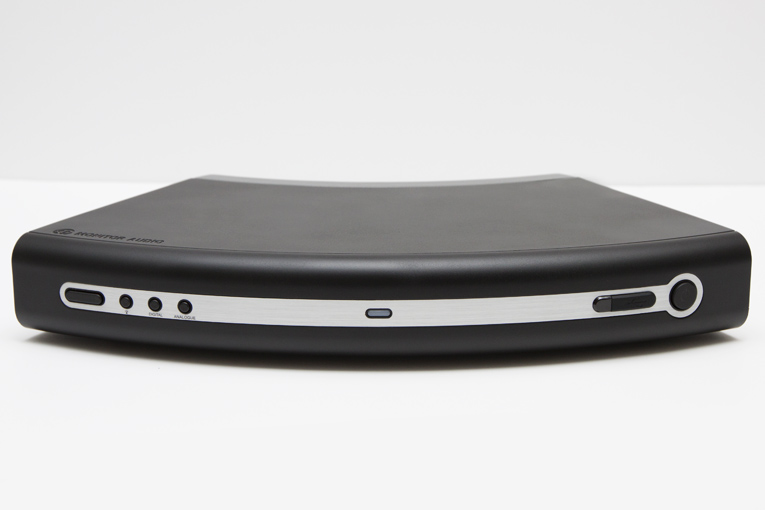 The Airstream A100’s limitations are to be expected. Its overall transparency wasn’t up to the level of integrated-DACs costing several times as much. Soundstages, too, were a bit smaller than I’m used to hearing through my KEFs -- Burial’s lively, expansive soundscapes were a bit closed-in. But for these to be my only quibbles about the A100 -- and they are only quibbles -- is remarkable. All too frequently, shopping at the $500 price point is a matter of damage control, with a high risk of never getting a linear, coherent sound that is in any way resolving. That the Monitor not only does nothing wrong, but an awful lot right, is a real achievement.

NuForce’s DDA-100 ($549) is something of a benchmark: SoundStage! Access’s Roger Kanno and I both use one as our reference affordable integrated amplifier. It’s a more limited product than the Monitor Airstream A100: A pure digital amp that offers only digital connectivity (coaxial, optical, adaptive USB), the NuForce lacks a conventional DAC stage, instead leaving signals in the digital domain until just before its speaker outputs. Nor does it have a wireless input, or analog inputs of any kind. What it does do, however, it does terrifically well. Its 50Wpc class-D switching amplifier has a broad, quick, incisive sound.

Compared to the Airstream A100, the NuForce is slightly more revealing, with superb imaging. The DDA-100 is also wickedly quick and nimble, conveys a greater sense of spaciousness, and has a more crystalline top end that never enters the territory of “hard” or even “lively” sound. Its bass is ultimately less voluminous than what the A100 can muster, but that bass has a greater sense of composure and slam.

While in the ways mentioned the NuForce offers better sound, to my ears, it couldn’t quite overtake the Monitor’s unimpeachable midrange. Through the DDA-100, voices and instruments, while still sounding very good, fell a bit short in terms of tonal density, color, and vibrance. I could listen to singer-songwriters for weeks at a time through the A100 and it would continue to command my rapt attention. And when you add in its wireless input, analog inputs, USB input (iOS only), and RCA output, the Monitor is the more engaging, flexible, and livable device, especially for Apple users like me.

Monitor’s Airstream A100 is a honey of an amp that makes a compelling argument for never having to buy into traditional hi-fi of yore. With analog, digital, and wireless connectivity, an accomplished class-AB amplifier -- something its competitors can’t boast -- and sound quality that reaches well past its $499 price, it comes highly, highly recommended. $500 never sounded so good.