As any audio enthusiast knows, the variety of loudspeakers currently being manufactured is unbelievably vast. Drive-units, too, greatly vary, from the ubiquitous cones and domes to exotic-looking flat panels, electrostatic drivers, and horns. One of the biggest achievements in speaker development would be a single driver that could accurately reproduce the entire audioband, from 20Hz to 20kHz -- such a loudspeaker would need no crossover to direct different frequencies to drivers of different sizes and/or types, and would avoid all the distortion and power loss this process entails. Some types of speakers -- e.g., planars and electrostatics -- have come close to the ideal of a single driver, but they still use crossovers or different types of drivers somewhere in their designs to cover the entire audioband. Although no one has yet come up with a high-quality, full-range, single-driver speaker, it arguably remains the goal of many speaker designers. Meanwhile, the practical objective is still a seamless transition between drivers, so that you can’t hear the moment or the frequency at which, say, a woofer hands off to a midrange, or a tweeter takes over from a midrange. 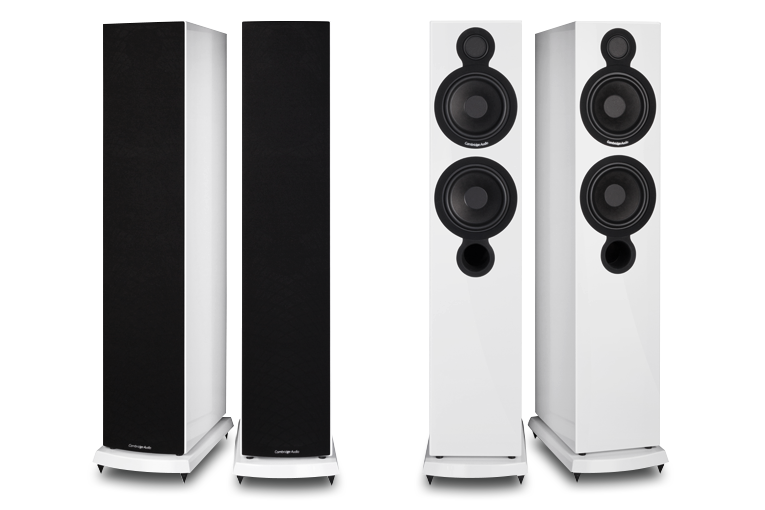 Cambridge Audio’s solution is to use a single driver -- they call theirs a Balanced Mode Radiator (BMR) -- to cover the frequency range normally spanned by a midrange cone and a dome tweeter. Their first speaker to use this technology, the Aero 2 bookshelf model ($549 USD per pair), impressed Doug Schneider; in his April 2014 review for Soundstage! Hi-Fi, he lauded its soundstaging and imaging as being “nothing short of extraordinary.” This review is of the Aeromax 6 ($1500/pair), a small, floorstanding model that Cambridge claims is “even better sounding than its predecessor,” the Aero 6.

At 38.6”H x 9.4”W x 13.5”D and 37.4 pounds, the Aeromax 6 would be suitable for any room of small to medium size. Visually, these rectilinear boxes don’t scream excitement, but the smooth, lustrous Black Gloss finish of my review samples is quite elegant (White Gloss is also available), and makes the Aeromax 6 look more costly than $1500/pair. A plinth bolts on to the bottom of the speaker for stability; to this, you can add spikes to couple the speaker to the floor. The provided grille runs the speaker’s full height, but I left these off because the Aeromax 6es looked so good without them. Like a conventional tweeter, the 2”-diameter BMR sits above a vertical array of two 6.5” woofers. Just below the lower woofer, at the center of the front baffle, is a single, 2.5”-diameter port. 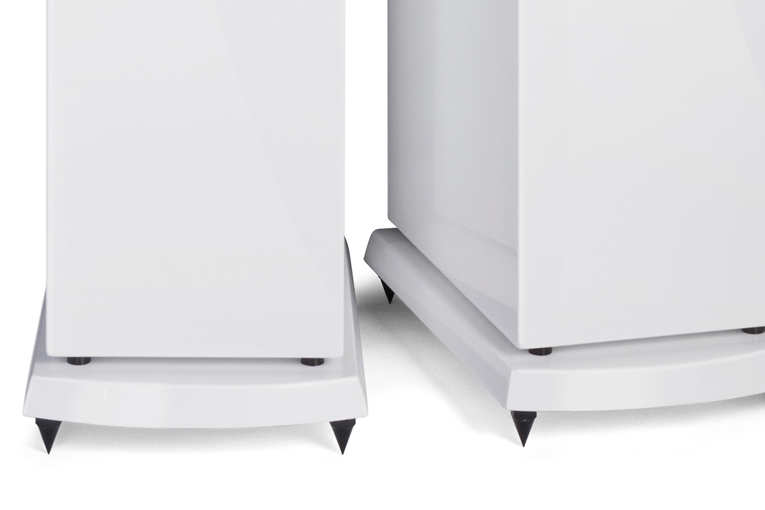 Cambridge Audio, however, calls these woofers subwoofers. As they explain, the bandwidth of the Aeromax 6’s BMR ranges from 250Hz to 22kHz, eliminating the need for a dedicated midrange driver -- the 6.5” drivers cover only the lowest frequencies, from 250Hz down. Compare that to a conventional speaker with a 1”-diameter tweeter and a 6.5” woofer: the tweeter would handle frequencies from 20kHz down to 2 or 3kHz, and the woofer from 2 or 3kHz down. 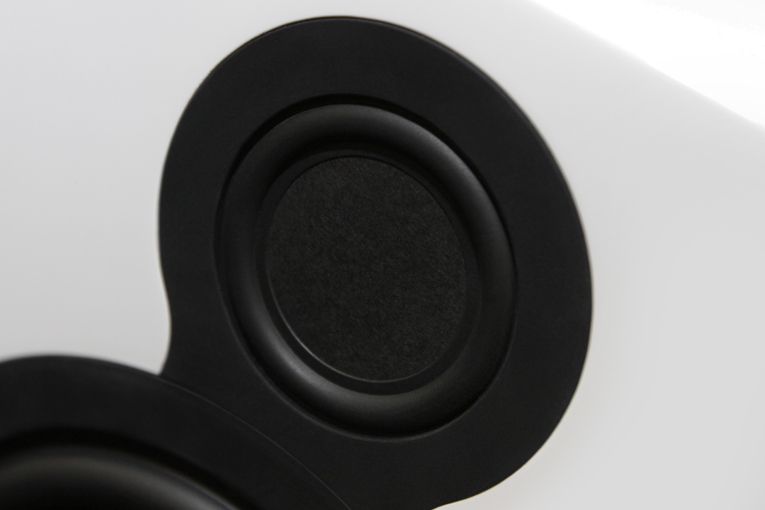 The BMR in the Aeromax 6 is Cambridge’s fourth version of this driver. A BMR operates much like a conventional driver: an electromagnetic motor moves a suspended mass, this movement vibrating air to create soundwaves. Where the BMR differs from a conventional driver is in that suspended mass: rather than a rigid cone or dome, the suspended mass is a flat, flexible diaphragm, in this case a paper disc backed with a paper honeycomb structure and having a rubber surround. At lower frequencies, the BMR works as does a conventional cone speaker: by pistonic motion of its diaphragm. At higher frequencies, however, the diaphragm’s surface flexes to produce peaks and valleys, aka modes, to produce soundwaves. These peaks and valleys are not random, but repeatable for each frequency. Compare such motion with that of a conventional dome tweeter, which moves a rigid, circular surface in and out at high frequencies. Also, the shape of a dome limits its dispersion of high frequencies -- its focus narrows, or “beams,” at higher frequencies -- whereas the BMR has much wider dispersion throughout its bandwidth. Using laser measurement and finite-element analysis (FEA), the driver’s material can be optimized to produce a flat frequency response throughout the driver’s bandwidth. Because of this combination of pistonic and bending-wave actions in a single driver, the BMR is sometimes called a hybrid driver.

The 6.5” drivers are conventional paper-cone woofers locked “mechanically to the cabinet structure” for lower coloration, according to Cambridge Audio, who also claim that the cabinet has extensive internal bracing. I could feel how solid the cabinets were by knocking on the side panels -- I heard only a dull thud. A foam port plug is included for rooms in which the Aeromax 6 produces too much bass. Near the bottom of the rear panel is a single set of binding posts, of higher quality than I’ve seen in comparably priced speakers. 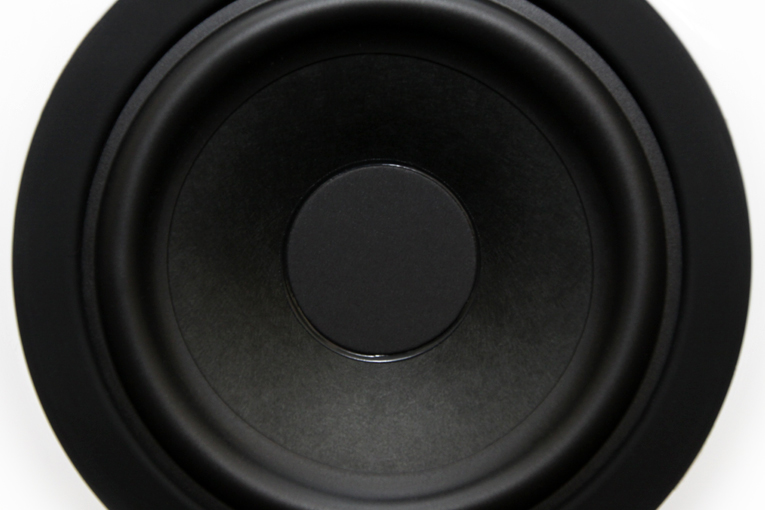 With a claimed sensitivity of 90dB/2.83V/m and an impedance specified as “compatible” with 8 ohms, the Aeromax 6 should be a fairly easy load for any amplifier; neither of my amps had any problem with them.

I primarily drove the Aeromax 6 with a NuPrime IDA-16 integrated amplifier, but also used an Integra DTA-70.1 multichannel amp. My source was either my streamer, Cambridge Audio’s Stream Magic 6, or my disc player, an Oppo BDP-95 universal Blu-ray player. Initially, I placed the Aeromax 6es 10’ from my listening seat and 6’ from each other, with the speakers’ rear panels 2.5’ from the front wall and toed-in toward my seat by about 15 degrees. But I wasn’t entirely happy with the bass response, so I moved the speakers back until they were only 6” from the front wall, 8’ apart, and 12’ from my seat, with no toe-in. These positions produced better bass response and virtually no compromise in imaging, so there the Aeromax 6es remained for most of my listening.

As soon as I fired up “September in the Rain,” from the Roy Hargrove Big Band’s Emergence (16-bit/44.1kHz FLAC, EmArcy), I knew I was in for a treat. The Cambridge Audio Aeromax 6es produced a seamless front soundstage and outstanding image specificity. Hargrove’s trumpet and voice appeared solidly in the middle of the soundstage, the rest of his large band layered behind him, with imaging so good I could pick out individual players in the band. Another example was “Bye Bye Blackbird,” from Patricia Barber’s Nightclub (SACD/CD, Mobile Fidelity Sound Lab 2004). In this song, Barber’s voice and piano are accompanied by bass and drums, and she solos on piano midway. The aural image of the piano was so precise through the Aeromax 6es that I could follow the movements of her fingers. 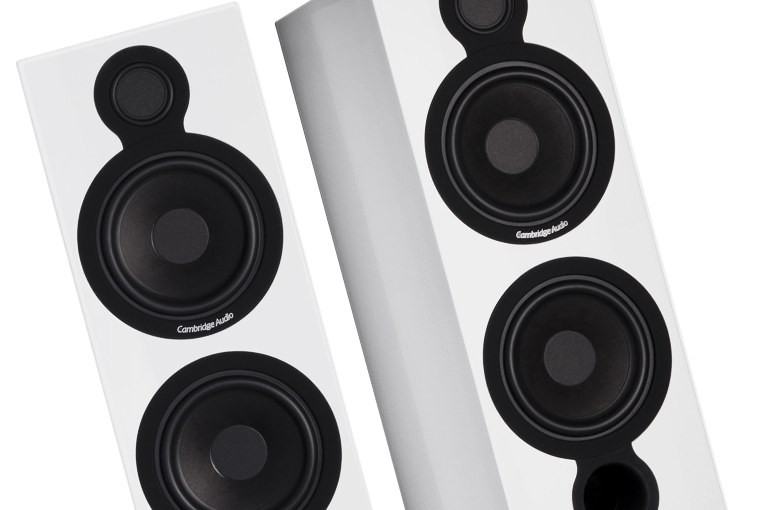 The other remarkable trait of the Aeromax 6 was how silky-smooth it sounded throughout the midrange to the high frequencies. Guitars can have a hard edge that can grate on the ears when not well reproduced, but the flamenco guitar in “Aspan,” from John McLaughlin, Al Di Meola, and Paco de Lucia’s Passion Grace & Fire (16/44.1 FLAC, Columbia), sounded smooth and musical through the Aeromax 6es -- especially Di Meola’s steel-string guitar in the left channel. His high notes were pure magic through the Cambridges, and not as fatiguing as through some other speakers I’ve heard. Reproducing the sound of the trumpet can also be difficult, and a great speaker will toe the fine line between maximizing resolution and sounding brittle. When I listened to trumpeter Wynton Marsalis play his “In the Afterglow,” from Marsalis Standard Time, Vol. 1 (16/44.1 FLAC, Columbia), the Aeromax 6 toed this line perfectly -- which puts it firmly in the Great Speaker category. 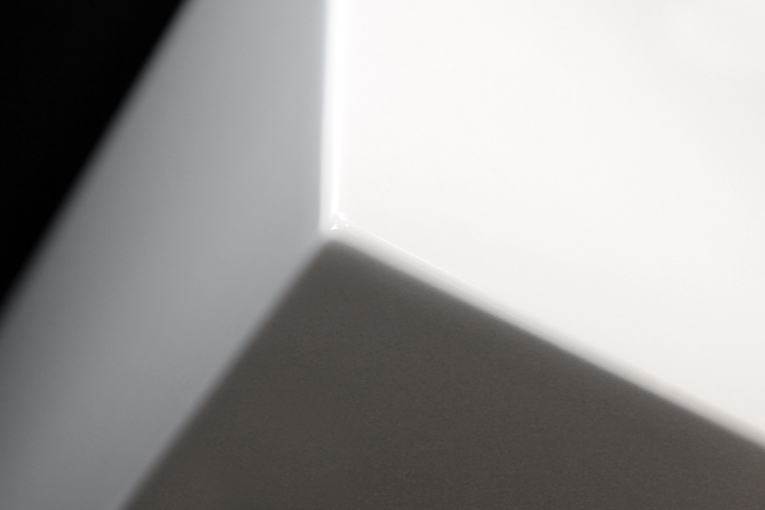 With respect to coherence, some ears are sensitive at around 2kHz, and a speaker’s transition from its tweeter to a 5” or 6” midrange driver can be audible. If the midrange driver isn’t up to snuff, this can give voices a “cupped-hands” coloration that makes them sound nasal. What I heard from the Aeromax 6es was a complete absence of this distortion. This was most noticeable when listening to women singers, such as Chantal Kreviazuk in the title track of her In This Life (16/44.1 FLAC, Universal). Her voice utterly soars in this song, and it had no hint of distortion through the Cambridges, bringing me closer to this live performance than I’ve experienced with other speakers.

Cambridge Audio may call their 6.5” drivers “subwoofers,” but that didn’t mean that the Aeromax 6 plumbed the lowest depths -- in this regard it was merely competitive within its price class, and didn’t challenge the upper-echelon speakers it threatened with other aspects of its sound. That’s not to say a bookshelf speaker could match its low-end performance -- far from it. The Aeromax 6 just didn’t go as deep as is suggested by its size and Cambridge’s use of the word subwoofers. When I listened to “Train Song,” from Holly Cole’s Temptation (16/44.1 FLAC, Alert), David Pilch’s double bass was present, but not as room-filling as with some other tower speakers I’ve heard.

The Aeromax 6’s bass definition, however, was first rate -- it let me hear each bass note as an individual event. As I discovered, the Aeromax 6es’ reproduction of the lows benefited from placing the speakers close to the wall behind them, which didn’t compromise their imaging and soundstaging, as it can with other speakers. But no speaker can do everything, and there were trade-offs at both ends of the audioband: The Aeromax 6 lacked a bit of high-frequency sparkle and a bit of low-frequency extension. In all other areas, it was superb.

Just before receiving the Aeromax 6es, I had SVS’s Prime Tower speakers in my room, which made for a good comparison. At 36.6"H x 8"W x 11.6"D, the Prime Tower is about 2” smaller than the Aeromax 6 in all dimensions, but outweighs it by almost three pounds. The SVS has a conventional 1” aluminum-dome tweeter, a 4.5” polypropylene midrange, and two 6.5” polypropylene woofers, in a boxy cabinet with a high-gloss black finish for $1198/pair. (The Prime Tower is also available in Black Ash, for $998/pair, but looks way better in gloss black.)

The two models also differed in the bass. Although both are specified down to 30Hz, I found the Prime Tower’s bass stunning in my room, giving me much greater bass than I expected from a cabinet of that size. When listening to Jakob Dylan’s Women + Country (16/44.1 FLAC, Sony), I found the drum beat in “Nothing but the Whole Wide World” much more prominent than through the Aeromax 6. The beat wasn’t as heavy through the Cambridges, but it was smoother than through the SVSes. Another example was “Code Cool,” from Patricia Barber’s Smash (16/44.1 FLAC, Concord Jazz). The kick drum is featured prominently at various points through the song, and it sounded more dynamic through the SVS than the Cambridge speakers. Again, no speaker can do everything -- there are always trade-offs.

Although Cambridge Audio’s Aeromax 6 is not the still-mythical, single-driver, full-range speaker I spoke of at the start, its BMR driver does come close, reproducing everything from 250Hz up with excellent quality. The cohesiveness of voices and piano through the Aeromax 6 is unmatched in my experience in the price range of $1500-$3000/pair. If you’re looking in that range, and value imaging and soundstaging above all else, look no further: the Aeromax 6 is your answer. It’s pure gold.