When I was asked to review Octave Audio’s Phono EQ.2 phono preamp, I enthusiastically accepted. I’d wanted to evaluate something from Octave for some time, had been hankering to review another phono stage, and the Phono EQ.2 ($1899 USD) seemed a great way to do both. And once I’d learned more about this German company’s ethos, their design approach really piqued my interest. 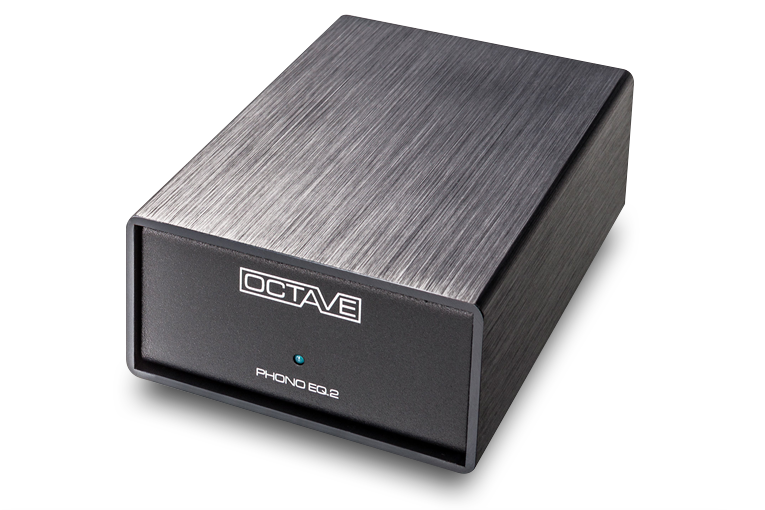 According to founder and chief designer Andreas Hofmann, every Octave product includes many parts designed in-house, from input jacks to output transformers. Each component is built by hand at their headquarters, in Karlsbad, Germany. Indeed, it appears from Octave’s website that they don’t merely stuff a few stock tube circuits into a fancy case and call it good: They take pride in using a holistic approach that incorporates solid-state technology to create electrically stable, low-noise platforms on which the thermionic valve can shine. In fact, every product featured on Octave’s site seems to use hybrid circuits that couple transistor front ends to tubed output stages.

Except for the Phono EQ.2.

Its diminutive size (3.9”W x 2.1”H x 6.5”D) and weight (1.75 pounds) are the first hints that the Phono EQ.2 is a purely solid-state design. Its magnetically shielded case of brushed aluminum can be had in any color, so long as it’s black. The front panel of said case has a blue LED at the center, to indicate power-up status, and that’s it. On the rear panel are three pairs of chassis-mounted, gold-plated RCA jacks -- one pair each for the moving-coil input, moving-magnet input, and line output -- a knurled plastic ground post, MC/MM toggle switch, and an input jack for the 24V DC power supply (a small wall wart). Together, the EQ.2 and its power supply weigh barely two pounds.

Like many of today’s phono preamps, the EQ.2 is a simple, no-frills device. Its gain and loading can be adjusted via 12 DIP switches on its underside. For MC cartridges, the choices of gain are 58, 62, 68, and 72dB, with 13 choices of input impedance ranging from 62 to 1000 ohms. For MM cartridges, the gain and input impedance are fixed at 50dB and 47k ohms, respectively. The output impedance for both cartridge types is fixed at 100 ohms. The EQ.2’s input sensitivities are specified as 4mV for MM and, for MC, an impressive 0.1µ-1.0mV. 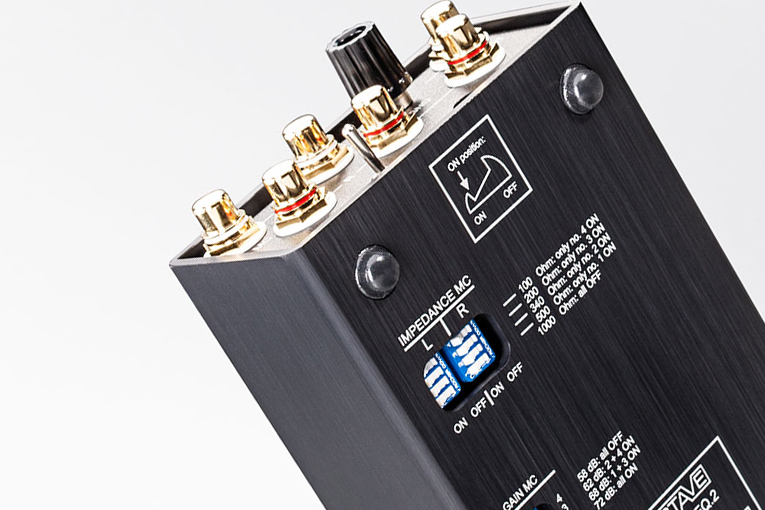 Its design simplicity made setting up the Phono EQ.2 a breeze. After making all requisite connections, I set the loading to 125 ohms and the gain to 62dB, for my Lyra Delos MC cartridge. Total setup time: well under five minutes.

Burn-in was a different story. At first, it seemed that the EQ.2’s sound had stabilized at 60 hours of run-in -- but after about 100 hours, I was surprised to hear a fairly noticeable and permanent change in its tonal character: The highs opened up a bit, and the midrange sounded more fully fleshed out. This wasn’t a night-and-day difference, but it was enough for me to reassess the EQ.2’s sound. In short: If you’re waiting for your own Phono EQ.2 to sound its best, be patient.

The Phono EQ.2 now fully burned in, I cued up Abbey Road, from the 1978 boxed set The Beatles Collection (LPs, Apple PCS 7088). Even with this less-than-stellar recording, Octave’s pintsize phono stage acquitted itself well before ever making a sound: The EQ.2 was supremely quiet, both in the playback chain and in the groove, with nary a trace of self-induced noise. Even through a pair of 94dB-sensitive speakers, I could hear no hiss or static.

Once the music kicked in, the Phono EQ.2 produced a sound that was smooth, warm, and rich overall, with a slightly laid-back midrange. In “Come Together,” the Octave eliminated much of the upper peakiness and glare in John Lennon’s voice without dulling his tone. This was also true of “Maxwell’s Silver Hammer,” in which both Paul McCartney’s voice and the hammer strokes sounded more naturally reproduced and lifelike; the latter were also free of the bright, harsh clink so often heard through other phono stages. Even though this peakiness is endemic to this particular reissue, the Octave was adept at drawing no extra attention to this region. 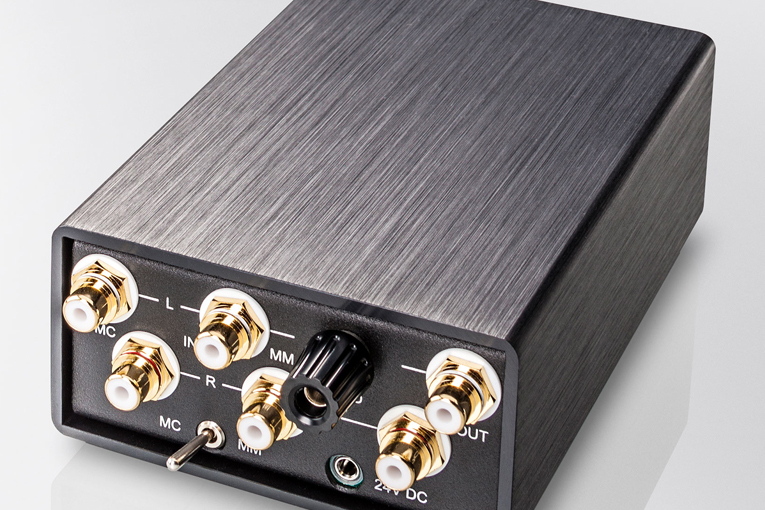 Readers who are ticking items on their audiophile checklists will be happy to know that the Phono EQ.2’s complete spectral balance matched the quality of its midrange. Radiohead’s Kid A (LP, EMI 52959 0), for example, highlighted the Octave’s weighty bass, which was deep, resonant, and powerful. The droning synth bass in “Everything in Its Right Place,” for example, was reproduced with solid, muscular physicality. So, too, was the title track of the Junior Boys’ So This Is Goodbye (LP, Domino WIGLP 178) -- the bass came through with authority and tactile impact without any blurring of detail.

The Radiohead and Beatles albums also did well at showing off the EQ.2’s unhyped and easily listenable reproduction of the treble. On both albums, cymbals sounded smooth, delicate, and harmonically complete, while sitting just a hair lower on the amplitude scale overall. I never found this balance objectionable or distracting; in fact, I thought it helped minimize listening fatigue, and thus extend my long, late-night listening sessions. While I could’ve done with a microscopic boost in the treble overall, the Phono EQ.2’s balance seemed carefully tailored and expertly judged.

The Octave really began to shine when I fed it some intricately layered recordings. With “Before Your Very Eyes . . . ,” from Atoms for Peace’s Amok (LP, XL Records XLLP 583), the Phono EQ.2 deftly separated out the polyrhythmic mass of instruments with well-delineated clarity, in both the temporal and spatial senses. It was easy to hear how distinct percussive lines with varying time signatures were brought in and out of the mix to change the song’s overall arc and mood.

This sort of explicit separation never sounded as if it were being achieved at the expense of group unity, however: When I played through the Octave a recording in which such a thing is evident, such as Amok, the musicians always sounded rhythmically cohesive and locked in with each other in a way that mimicked the unity one might experience at a live performance. In my opinion, it’s this ability to let each rhythmic thread in the musical fabric shine through while remaining an organic part of the entire tapestry that separates truly musical from mere hi-fi gear. That the Octave Phono EQ.2 could deliver a healthy dose of this quality for under $2000 is very impressive. 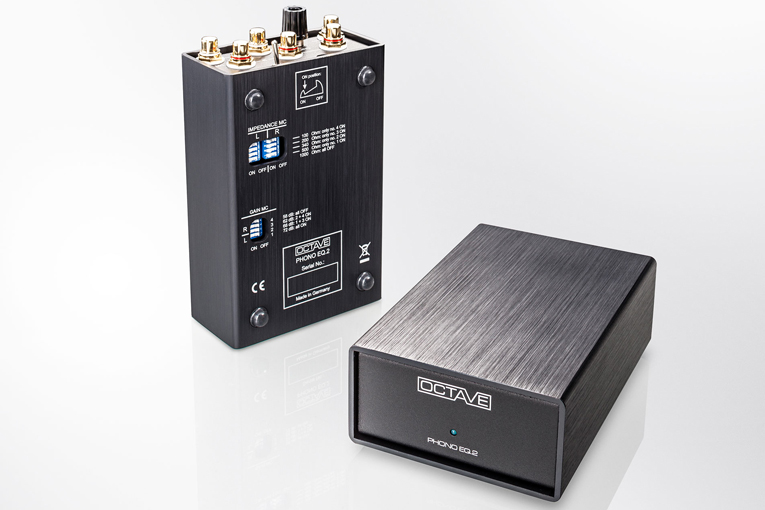 Perhaps it comes as no surprise, then, that the Octave’s other great strengths were the articulation and speed of its transients. When I listened to Fritz Reiner and the Chicago Symphony Orchestra’s recording of Rimsky-Korsakov’s Scheherazade (LP, RCA Living Stereo/Analogue Productions LSC/AAPC-2406), the Phono EQ.2 cleanly reproduced quick-moving passages for massed strings with outstanding definition and vivid clarity. This speed and precision also came through in the lightning-fast portions of La Campanella, from Liszt’s Grandes Études de Paganini, S.141 No.3, on Lang Lang’s Liszt: My Piano Hero (LP, Sony Classical 789141). Here, the EQ.2 was a champion at delivering all of the excitement and intensity with which Lang Lang’s fleet fingerwork imbues this piece, while never smearing any details or individual notes. The Octave Phono EQ.2’s way with transients did an outstanding job of pulling more music from the grooves than one might expect for its price.

Feeling as if I now had a handle on the EQ.2’s sound, I was eager to compare it with my reference phono stage: Graham Slee Products’ (GSP) wonderful Revelation M. While the two phono stages are aesthetically similar in their compact designs, the GSP can be configured at the factory for MM or MC cartridges, but not both -- hence my need to use a custom-made Sowter Magnetics 9570 step-up transformer with my Revelation, the latter configured for only MM cartridges. With the flick of a toggle switch on its rear panel, the Octave Phono EQ.2 can do either. The Graham Slee includes adjustable rolloff and turnover frequencies -- rarities among today’s phono stages -- while the Octave permits adjustments of gain and loading. At $2299 for the GSP-Sowter combo vs. $1899 for the Octave, I felt that the $400 difference in price left them close enough for a meaningful comparison.

I reacquainted myself with the Phono EQ.2’s warmth and authoritative bass by listening to “Bohemian’s Dilemma,” from jazz guitarist Nicola Conte’s Other Directions (LP, Schema 386). All the aforementioned depth, tactility, and impact were present and accounted for, and the Octave’s fine articulation was also evident in the lower registers. Compared to the GSP-Sowter, the Phono EQ.2 dug just a bit deeper into the bass bins while delivering noticeably more amplitude in the midbass.

Inserting the GSP-Sowter combo back in the chain, however, proved that it was no wilting flower: It marginally but consistently bettered the Octave in timing, drive, and momentum. With “Bohemian’s Dilemma,” for example, the GSP-Sowter propelled the music with greater force and insistence, while also sounding more rhythmically fluid and nimble. Interestingly, the Octave was quicker through the transients, but the GSP-Sowter had better rhythmic continuity and more sheer verve overall; the EQ.2 sounded a touch less exciting and alive by comparison. 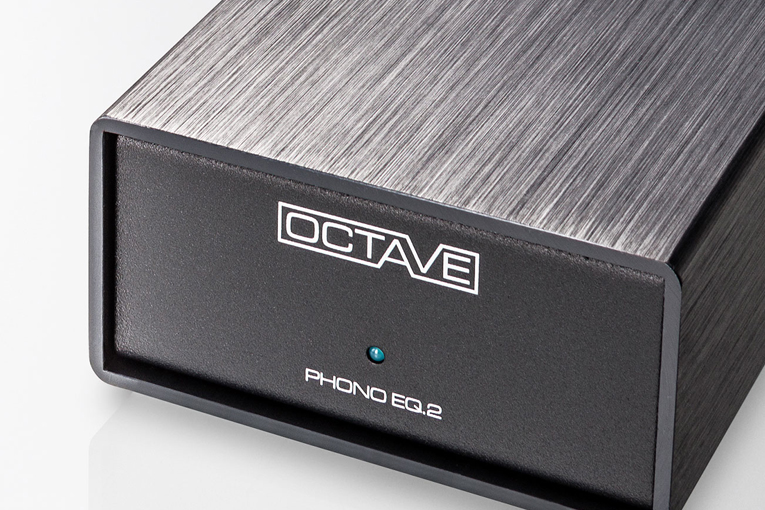 Both preamps sounded great throughout the midrange and treble, but with some minor differences here as well. The guitars in Radiohead’s Amnesiac (LP, EMI 5 32764 1), for example, sounded cleaner but drier through the Octave; here, the GSP-Sowter let through a little more “purr” and string decays. Thom Yorke’s voice was more clearly enunciated, and they stood out with greater relief through the EQ.2; the GSP-Sowter countered with more body, lushness, and roundness in Yorke’s voice. Generally, the Octave leaned a tad more toward a typical solid-state sound, while the GSP-Sowter leaned a bit more toward the tube side. Both preamps were still highly musical, however.

In terms of dynamics, the Phono EQ.2 was quite good, but no match for the Graham Slee Revelation M with Sowter Magnetics 9570. With Scheherazade, the GSP-Sowter capably delivered the full dynamic expressiveness of my combo of Rega Research RP8 turntable with Lyra Delos cartridge, sounding more startlingly explosive or more intimately quiet, when either quality was called for; the Octave’s dynamic impact was just a smidge limited. Still, the EQ.2 held a slight edge in terms of detail: Nuanced microdynamic information, such as the gentle triangle strokes throughout this work, was more easily audible while being not necessarily any louder.

Even after a few solid weeks of comparing the Octave with my reference combo of preamp and step-up, I was hard-pressed to declare either the undisputed champ. Both offered fine sound and made excellent music, and are nearly equivalent in terms of perceived value per dollar. Which you’ll choose will probably come down to whether you think the sound of one of these better matches your system, or if you’ll benefit more from adjustable loading or selectable EQ curves. Owing to my decent collection of pre-RIAA LPs, I’m sticking with my Graham Slee and Sowter Magnetics -- but I could have easily gone with the Octave and been just as happy.

Now that I’ve spent some quality time with the Octave Audio Phono EQ.2, I’m pleased as punch I got the chance to hear it up close and personal. It offers a lot of analog satisfaction in a refreshingly compact and well-built package. On sonic grounds, it favorably competes with anything at or near its price, and its adjustable gain and loading will be boons to vinyl lovers who expect to eventually upgrade or change their cartridges and don’t want to worry about compatibility. If you’re looking for something that can properly load your cartridge, makes marathon listening a breeze, and -- most important -- never fails to make compelling music, do yourself a solid and check out Octave Audio’s Phono EQ.2. You’ll be happy you did.