Speaker maker Sonus Faber was established in 1983, in the Veneto region of Italy, and in 2007 was acquired by the McIntosh Group, owner of such brands as McIntosh Laboratory and Audio Research. SoundStage! publisher Doug Schneider visited Sonus Faber in 2013, and saw their production line in Vicenza. SF’s many lines of speakers are mostly designed for listening to two-channel music recordings, but they also make speakers for multichannel systems and for supercar manufacturer Pagani, down the road in Modena. No surprise, given that Sonus Faber has repeatedly won SoundStage!’s Aesthetics and Sound award. 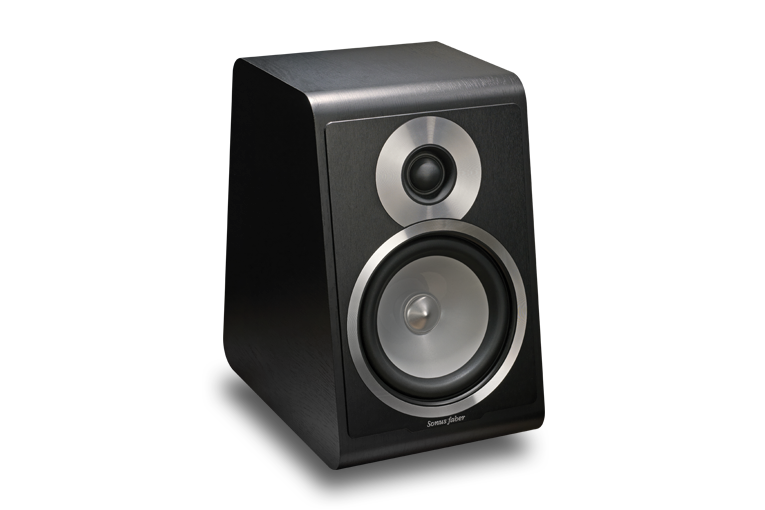 As I unpacked the triple-boxed review samples of the Principia 3, the first thing I noticed was that they didn’t have the shape of a typical box speaker. Most speakers have the shape of a rectangular prism, but the Principia’s enclosure is a trapezoid -- like Sonus Faber’s slightly upmarket Chameleon B ($899/pair). SF describes the Principias’ design as follows: “The deep relationship with the Chameleon collection is evident in many design and technical details they share -- particularly the brushed aluminum finishes and trapezoidal shape.” Rather than departing from conventional speaker shapes merely for appearance’s sake, making the speaker’s front and rear panels nonparallel reduces the formation of internal standing waves -- those low-frequency resonances that can interfere with the sound.

I removed the magnetically attached fabric grille to see striking, silvery, brushed-aluminum accent rings around the drivers against the jet-black vinyl veneer covering the MDF cabinet. The use of magnets instead of pegs leaves the speaker’s baffle unmarred. Although, unlike the Chameleons, the Principias are made in China, Sonus Faber’s Italian design aesthetic is nonetheless apparent. This is no plain black box; the attention to design is a rare thing at this price point.

Both drivers of the two-way Principia 3 are made by Sonus Faber: a 1” (29mm) precoated fabric-dome tweeter, crossed over at 2500Hz to a 7” (180mm) polypropylene-cone midrange-woofer. Other specs: a frequency range of 45Hz-25kHz, sensitivity of 88dB (2.83V/1m), a nominal impedance of 4 ohms, and a suggested range of amplification of 50-200W. Interestingly, the Principia 3 has a foot to lift it above the surface it’s placed on, so that the speaker’s downfiring port has room to breathe: “The bottom porting, another aspect in common with [the] Chameleon collection, help[s] the positioning in the listening environment and enhance[s] even more the lower[-]frequencies performance.” The Principia 3 measures 13”H x 7.7”W x 11.4”D and weighs 13.4 pounds. A dedicated, 22.25”-tall stand is available from Sonus Faber. 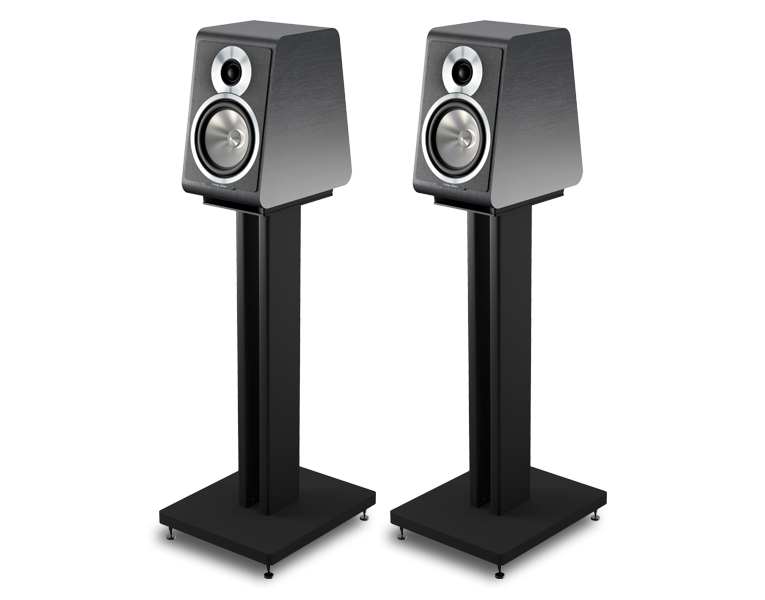 The Principia 3’s two pairs of binding posts support spades, banana plugs, and bare wire, and come with metal jumpers for single-wire amplification. These jumpers are considerably more substantial than the ones provided for my Wharfedale Diamond 8.2 minimonitors. Nonetheless, as the Principia 3s support biwiring and biamping, and that was the wiring in place at my sand-filled Target Audio speaker stands, I removed the Sonus Faber’s bridges and used banana plugs to biwire them to my NAD C 356BEE integrated amplifier.

I played the final movement of Alberto Ginastera’s dance suite Estancia -- the fast-paced Malambo, with its 6/8 rhythmic patterns, performed by the Saxony Philharmonic Wind Orchestra led by Thomas Clamor (24-bit/96kHz FLAC, Genuin/eClassical). The Principia 3s produced a crisp, precise image of the tight ensemble of xylophone, castanets, and brass as the depicted gauchos danced across the entire width of the soundstage. It was difficult to categorize the timbre as bright or warm -- the Principia threaded the needle, offering an optimal balance of the characteristics of the rapid xylophone strokes. While the Sonus Faber of decades past had a reputation for high-frequency reticence and a “sweet” coloration, neither was at all apparent in the sound of the Principia 3. The rambunctiousness of Malambo was delivered with no hint of congestion.

At the same time, the Principia 3 was at home with delicate, fluttering flute passages, in particular in the third movement of the prolific Jean Françaix’s Woodwind Quintet No.1, performed by the Bergen Woodwind Quintet, which escalates into competing displays of virtuosity among all five players (24/44.1 FLAC, BIS/eClassical). The speakers had no trouble keeping up with what was needed as the music passed from virtuosic arpeggiated patterns to sustained chords for the full ensemble to sardonic horn interludes, all delivered with clarity. The imaging was impressive -- it was easy to pick out individual instrumentalists as each handed off the lead from his or her area of the soundstage. However, what I did not hear were the characteristics of the recording venue, a church -- Herdla Kirke, in Askøy, Norway. Despite that, the Principias presented nicely rounded bell tones from Ilene Chanon’s horn when it thunderously bursts in, then is suddenly exposed and isolated as the woodwinds go silent, and picks up the motif of the fourth and final movement. Passages played solo then fluidly blended into each other. 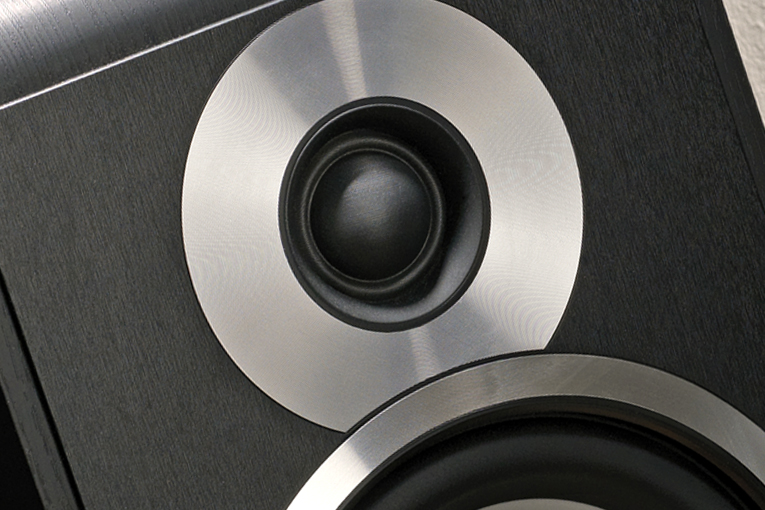 I mostly listen to classical music for critical, active listening, but I did play some jazz and rock, as those musics can exercise sound reproduction in a variety of different ways. There was a strong sense of three-dimensional space as John Coltrane stepped back, spatially, from the center of the ensemble, for his tenor-saxophone solo in “Oleo,” from the Miles Davis Sextet’s Jazz at the Plaza (SACD/CD, Columbia/Legacy CS 85245). While that action doesn’t align with how jazz combos tend to arrange themselves on stage, with the drummer at center rear, I’ve heard it on this recording’s mix before, and the Principias rendered it accurately. Recall, the Principia 3 is specified to have bass down to 45Hz (the floorstanding Principia 7 goes down to 38Hz), which is roughly F#1 -- not quite the lowest note on a double bass. Not surprisingly, the double bass’s extreme low range was more percussive than tonal. More consequentially, bassist Ray Brown’s solo in “Teach Me Tonight,” from the Ray Brown Trio’s Soular Energy (DVD-Audio, 24/192, Hi-Res Music/Concord Jazz HRM 2011), was a bit too mushy -- some of the tones lacked a forceful, fundamental center. Mating these minimonitors with a music-first subwoofer might fix that. Better was the percussive abruptness of Red Holloway’s tenor sax over the crisp, tight ensemble in “Mistreated but Undefeated Blues,” from the same album.

There was no sense of congestion in the wall-of-sound swells of “Eclipse,” from Pink Floyd’s The Dark Side of the Moon (SACD/CD, Capitol 5 82136 2), and the Principia 3s easily filled the room with sound that remained clear enough that I could discern the individual elements of the mix as they blend together. At the same time, the dialogue in the fadeout of “Money” was clear enough to easily penetrate the Cambridgeshire accent. In the ballad “Us and Them,” the Principia 3 appropriately mellowed out the slight brightness in David Gilmour’s voice and Dick Parry’s tenor sax, produced by my Music Hall MMF CD-25 CD player’s DAC -- it harked to Sonus Faber’s reputation for sweetness, but the keyboards remained a bit brittle. Throughout Dark Side, the Principia 3’s frequency range was wide enough to communicate the heartbeat and helicopter in the sound montage of “Speak to Me”; I never felt that the bass range was absent. In all, the Principia 3s delivered an involving and enveloping two-channel reproduction of the sound of an album I usually listen to in its multichannel mix.

In terms of specifications, the Principia 3 is similar to a pair of bookshelf loudspeakers I own: the Wharfedale Diamond 8.2s ($450/pair, discontinued). Both are rated down to 45Hz; the Principia 3 has slightly higher sensitivity, at 88 vs. 86dB, and slightly larger drivers: a 29mm tweeter and a 180mm midrange-woofer, vs., respectively, 25mm and 165mm drivers in the Diamond. In my experience, specs are of only limited use in evaluating speakers, but they do give some sense of the differences I can expect to hear.

Listening to both models at the same volume setting on my amplifier, the Principias sounded more forceful, so I decided to measure one of them. According to Smart Tools’ Sound Meter for Android, from 10’ away Annu Salminen’s horn entered about 4dB higher in level in Kalevi Aho’s Concerto for Horn and Chamber Orchestra, with John Storgårds conducting the Lapland Chamber Orchestra (24/96 FLAC, BIS/eClassical). Switching to the Wharfedale gave a hazy performance with less punch and a messy, mushy, confused soundstage. Moreover, the fadeout of Carolina Eyck’s Theremin in Midnight Sun, the eighth and final movement of Aho’s Eight Seasons: Concerto for Theremin and Chamber Orchestra -- could barely be made out, even after I’d bumped up the volume.

The Principia 3s, however, provided revealing detail, depth, and complexity, and rounded out notes fully rather than providing mere impressions of them. The Theremin, invented by Russian physicist Léon Theremin, is one of the earliest electronic instruments. It’s played by moving the hands closer to or farther away from the instrument’s two metal antennas, the distances determining pitch and amplitude. A common pattern, which appears in Aho’s concerto, is a swooping glissando across the frequency range. The Wharfedales were harsh at the highest pitches; the Principia 3s rendered a smooth, even, ethereal vocalization throughout the main motif of the fifth movement, Winter Frost, and pushed a bit lower down the scale. Despite their similar specs, the Sonus Faber Principia 3 outperformed the Wharfedale Diamond 8.2, particularly in detail, accuracy of tonality, and control through the lower midrange.

When upscale manufacturers attempt to address the lower end of the market, they have to make choices they’re not used to making in terms of materials and manufacturing processes. The question is whether or not such choices make sense. The Principia 3 is manufactured in China -- nowadays a common strategy -- without compromising the product. Such a choice makes possible savings in manufacturing while still using quality materials, such as Sonus Faber’s drivers.

Across the range of recordings and sources I played, I was thoroughly impressed with the sound of the Principia 3. Its sound was detailed, sufficiently neutral, and involving, and over a broader frequency range than I’d expected. In this competitive market for loudspeakers, with so many idiosyncrasies in terms of sound design and buyers’ personal preferences, listeners are well advised to try out speakers with their own ears in their own rooms. The Principia 3 should be included in that evaluative process -- it may well come out on top.