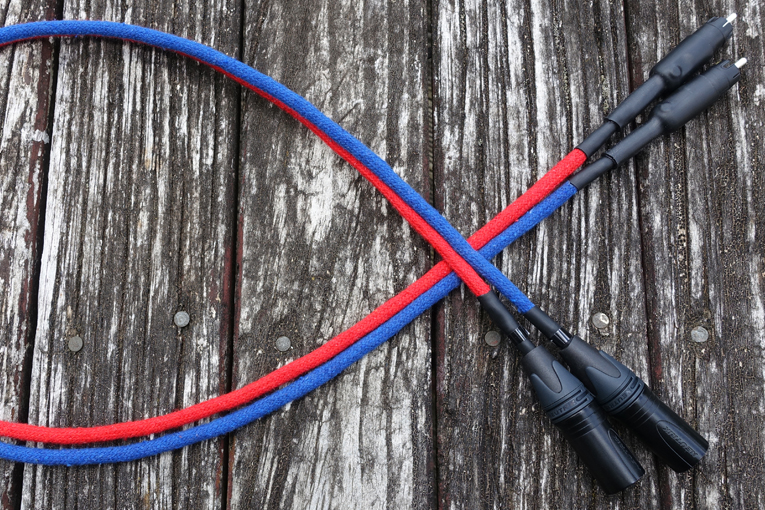 Since my discovery of Mad Scientist Audio, which is based in New Zealand, they’ve expanded their product line and now sell interconnects and power cords. Chief Mad Scientist and electronic engineer Bob Prangnell, who probably spends more time dreaming up ways to improve sound than most of us might consider healthy, has come up with the Nitro power cord ($399/1.2m) and the Heretical Analog interconnect ($199/1m pair with RCA plugs; $349/1m pair with XLRs).

The Nitro power cord is the more conventional of the two and, like all Mad Scientist models, it’s handmade. (Thank you, Mrs. Prangnell, for the Saturday nights you’ve no doubt sacrificed so that we, the listening public, may better enjoy our music.) My single criticism of the Nitro is that it looks handmade, with an appearance in keeping with the Mad Scientist name. The review sample’s outer sheath of red cotton is pleasant enough, and just shows the outline of what I suspect is the ground wire. Beneath that are the energized conductors, and a hand-wound copper shield that the Mad Scientist says also physically damps the cable. The 11-gauge conductors of oxygen-free copper are wound in a lay that Prangnell believes is unique to his cables, but that’s not the Nitro’s most distinctive or maddest design feature.

For the Nitro is more than a simple power cord; it’s a filtering power cord. Arrayed in Mad fashion and encased in an ill-fitting heatshrunk tube near the component end of the cord are two sets of BlackDiscus variants. The first set are Black Sticks (they’re actually mostly blue) and Magic Tubes -- glass vials containing an off-white powder. A little farther down the line are three sets of Kegs, which look like Rolo chocolate candies attached back to back. Each Keg has a single strand of one of the Nitro’s three conductors passing through its center. At either end of the Nitro, upgraded connector options and nation-specific connectors are available for worldwide deployment. The review sample came with standard 15A North American connectors in rhodium-plated copper. 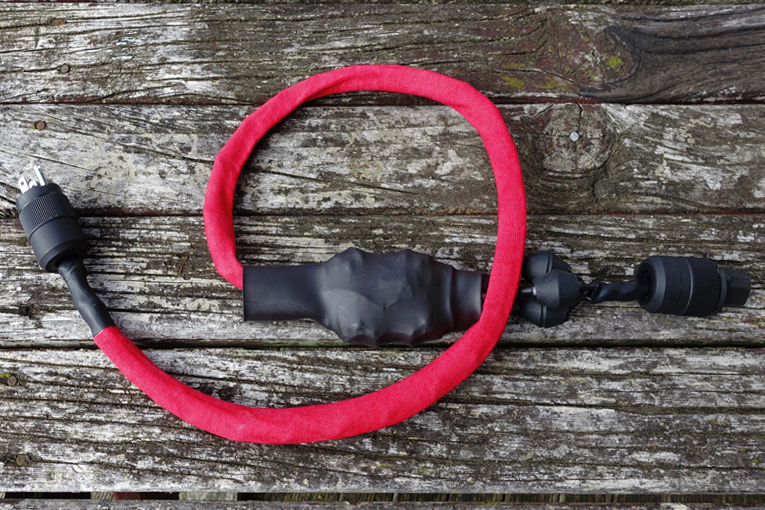 As its name suggests, the Heretical Analog interconnect is unusual; other than its designer and its cotton outer sleeve, it has nothing in common with the Nitro cord. The Heretical began life as a digital cable, and took its name as much from its use of carbon-fiber signal “wire” as its total disregard for the sainted 75-ohm impedance standard developed for the Sony/Philips Digital Interface Format (S/PDIF). Retailing for a paltry $129, the Heretical Digital flew off the shelves, sometimes in pairs. That got the Mad Scientist thinking that a Heretical Analog interconnect might be a wise next move for his Mad marketing department. And, as any good marketer knows, selling a pair of something for less than the price of two single purchases usually sells more product, hence the $199/pair price.

The Heretical Analog uses carbon fiber for the signal connection (the center pin on an RCA connector) and Cardas copper for the return (ground). If you’ve ever assembled your own cables and/or opened an RCA connector, you’ll know that attaching a carbon-fiber connector to a metal center pin is no easy task. Soldering doesn’t work with carbon fiber, so Mad Scientist Prangnell came up with a crimp-and-seal method that ensures an electrically solid, long-lasting connection.

The Hereticals arrived tied in loops, and it was immediately apparent that they have some spring, hinting at the use of carbon rods vs. metal threads. Prangnell confirmed this, and noted that while the cables are flexible and will bend reasonably well between components, they’ll snap if bent too far. This shouldn’t be a concern -- the Heretical felt solid, and came nowhere close to its breaking point in normal use. Like the Nitro, the Heretical comes with base-level connectors, as well as higher-priced options with claimed better sound. At my request, the review samples had Neutrik XLR connectors, as my preamp-to-power-amp connection is balanced only. The balanced version of the Heretical Analog uses carbon fiber for the two signal legs and Cardas copper for the ground, and sells for $349/1m pair.

Setting up cables is almost always easy, and that was the case with the Mad Scientists. The Heretical Analogs’ solidity made plugging in their XLR connectors a breeze, and they didn’t flex much when the connector was seated (XLR connectors have a locking mechanism to hold the cable in place). As for the Nitro, at first I wanted to make sure that their filter elements stayed clear of the other wires behind my system, but then I remembered that however they work, proximity to wiring is important, so I rearranged things so that their Kegs and Tubes and Sticks might offer some benefits to my speaker and power cords. Why not? And though I usually give cables 100 hours to break in, based on the immediate effect the BlackDiscuses had had, I began listening to the Nitro right away.

To be sure I could tell which cable was having what effect, I first put two Nitro power cords in play: one on my preamp, the other on my power amp. Later, I added the Heretical Analogs in place of my usual silver interconnects. As had happened when I’d sprinkled BlackDiscuses around my system, the effects of the Nitro were obvious, immediate, and beneficial.

The BlackDiscus technology excels at removing noise, even if you didn’t think your system was noisy. It always amazes me when a “black” background gets “blacker,” and while some might think that’s foolish, silence is definitely additive -- and, generally, the more silence, the better. Noise in a music signal has nothing to do with the recording -- if the artist and engineer didn’t add it, you shouldn’t hear it. The BlackDiscuses arrayed on the Nitro, and likely their proprietary weave and copper shielding, made the Nitro a seriously quiet power cord. 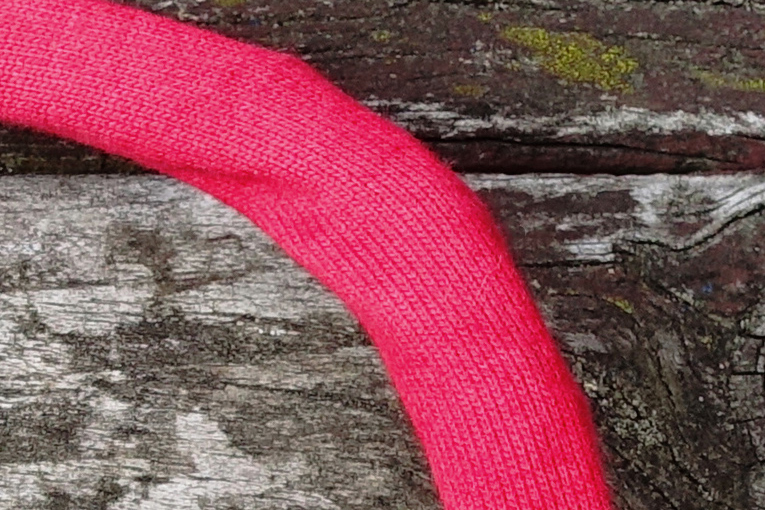 Silence makes a big difference with such high-resolution tracks as The Dance of the Tumblers, from Rimsky-Korsakov’s opera The Snow Maiden, performed by Eiji Oue and the Minnesota Orchestra (HDtracks 2013 Sampler, 24-bit/96kHz AIFF, Reference/HDtracks) -- especially in quieter passages. If you’ve ever wanted to hear what a triangle sounds like as it resonates around a concert hall, or the deliciously slow decay of cymbals against plucked violins, the Nitro is for you.

After using the Nitro alone for a week, I went all Heretical and swapped in the first carbon-fiber interconnects I’ve ever heard. Too curious to do otherwise, I listened immediately, and found my head cocking to the side and my vocal cords making sounds like “Whoa!” and “Hey!” and “Really?”

What I said about silence being additive was borne out by the insertion in my system of the Heretical Analog interconnects. System noise, which I can’t describe as necessarily tone-based but can lead to a sense of acoustic pressure being present when there is no signal, was no longer there: nada, zip, zilch. But after a while, it was too much of a good thing.

Back in the 1980s, I remember seeing a movie -- probably made by David Cronenberg -- that dealt with people losing their minds in deprivation chambers. With the Nitro and the Heretical and, importantly, my good old Blue Circle Audio BC6000 power conditioner all in the system, I found the lack of noise too much. This was a first. I just felt uncomfortable with the sound. It was superclear, detailed, and lively, but I was not digging it at all.

This revelation led me to experiment. I swapped out one Nitro for my reference Synergistic Research power cord, to see if that would help. There was a difference, but mostly just a loosening up of bass. I put the second Nitro back in and removed the BlackDiscuses from my speaker cables. That led to a small reduction in clarity, but the difference didn’t offset the discomfort I was feeling. The next logical step was to remove the BC6000. That took some work, because I wanted to use the BC6000’s outlets but not its filtering elements. So I got out my soldering iron and wired the outlets directly to the power inlet, bypassing the filters. I’ve used the BC6000 in three domiciles in three cities over some eight years. It’s always on, always doing its thing, and until I plugged a filtered power cord into it, I’d never had a second thought about my trusty Blue Circle. But as soon as it was gone, the difference was profound.

Now I had deep silence and terrific pace and snappy snare drums and deep, Gordian Knot-tight bass. Holy moley, that sounded great! The aforementioned triangles and cymbals floated in three dimensions with sparkle and wonderful shimmer. Relistening to tracks from INXS’s Kick (16/44.1 FLAC, Atlantic/Tidal), I found that what had sounded almost grating before, with the BC6000, was now invigorating and powerful, and had me sitting up and taking notice of the wonderful new level of sound I was hearing. I realized that too much filtering was sucking the life out of the music; clarity was great, but it had verged on the clinical. 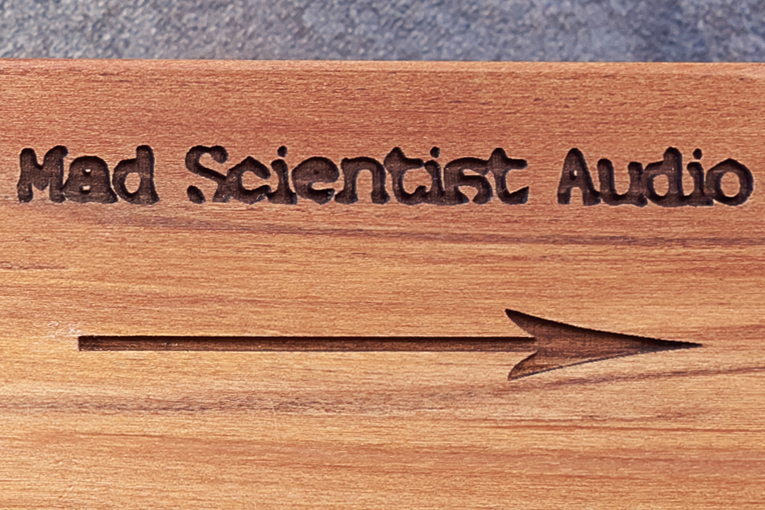 The next obvious step was to put my original cables back in place and hear how they did without the BC6000 -- something I’d never tried before. The result was surprising. With absolutely no filtering in place, I felt I could hear right into my utility pole’s transformer. Noise -- even the very slight noise I was hearing though my high-quality gear -- made the difference between hearing music and listening to it. While my reference cables are very good indeed with the BC6000 cleaning the power, without its filtering I was underwhelmed. Compared to the Mad Scientist cables on their own, mine on their own sounded flat, dull, and pedestrian. Sure, the music sounded OK, but after 20 minutes, I’d had all I could take. I got up and reinserted the BC6000.

With the BC6000 warmed up and my reference cables still in, I was again enjoying the music, but it was apparent that the BC6000’s capacitive filtering was creating some adverse effects to go along with its positive ones. The smearing was back -- higher-treble sounds, especially struck cymbals, seemed to touch and interact instead of floating freely. Bass wasn’t as tight as with the Mad Scientist cables and without the Blue Circle. Soundstage dimensionality was back in force, and I didn’t think I was listening to lesser equipment or poor recordings -- but the music didn’t quite pop as it did through the Mad Scientists.

I’m left with a dilemma. Now that I’ve heard the smearing effect of my power filter, I can’t not hear it. It looks as if I might need a new filter, or to replace my cables with Mad Scientists, or give up on music for all time. But that last choice seems pretty harsh. Maybe I’ll try something else first.

I wouldn’t go wrong buying Mad Scientist Audio’s Heretical Analog interconnects and Nitro power cords -- they’re excellent products and incredible bargains. They’re not audio jewelry -- you may want to hide the Nitros from sensitive eyes -- but looks are clearly not everything. If your cable budget is limited and you want to know how great wires can transform a system’s sound, go Mad.