Recently, I reviewed Anthem’s new AVM 60 surround-sound processor, which replaced the AVM 50v 3D, the last version of the second generation of Anthem’s AVM surround-sound processors. And while Anthem had continually upgraded that generation during its long run of nearly 15 years, the accompanying MCA series of amplifiers, after a few iterations in its first few years of production, remained unchanged during that time -- until 2016, when Anthem unveiled, alongside the AVM 60, the new MCA ’25 amps.

Available, like its predecessors, in two-, three-, and five-channel versions, the MCAs are also made in Canada by Anthem, but have been completely redesigned. I received for review the five-channel MCA 525 ($3499 USD). Also available are the two-channel MCA 225 ($1999) and the three-channel MCA 325 ($2499).

Time for a cool change

The cosmetics of the MCA amplifiers have been refreshed with a new front panel that matches the look of the AVM 60 and MRX ’20 series of receivers; otherwise, they look quite similar to the previous models. Looking through the top vents of the MCA 525, the five amplifier boards run most of the depth of the amp, each with its own massive, many-finned aluminum heatsink. The internal layout is quite clean, with relatively few wires and two large, low-flux toroidal transformers at front right, a bank of large capacitors at front left. The MCA 525’s predecessor, the MCA 50, also had two toroidal transformers, one powering the two front channels, the other dedicated to the center and surround channels. In the MCA 525, the two supplies are shared among all five channels, resulting in more power being available to each channel, as required. Each channel uses eight high-current, bipolar output devices claimed to be run conservatively, to reduce stress on them; power-on inrush has also been minimized, to reduce stress on the parts. Overall, the design and construction of the MCA 525 appears to be of very high quality. 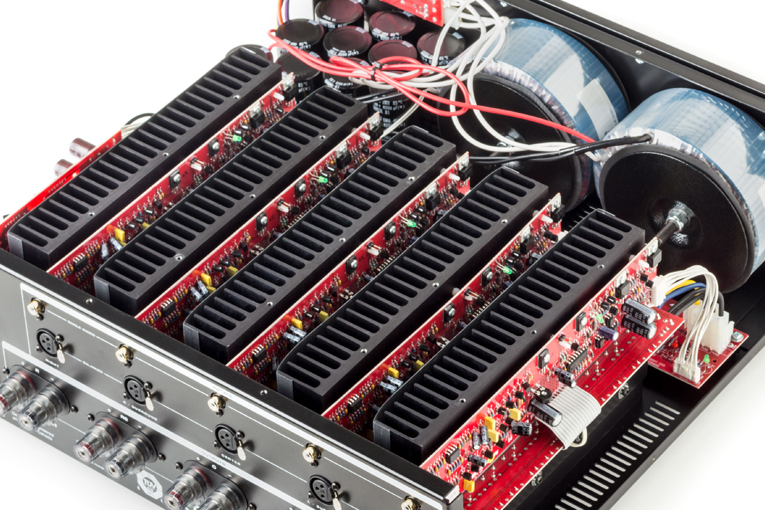 Anthem says that they’ve reduced the amount of internal wiring to provide a shorter circuit path. Also, a new generation of Anthem’s Advanced Load Monitoring (ALM) technology is included, to monitor the MCA 525’s temperature, current, and voltage to ensure safe operation over the long term. In extreme circumstances, ALM will shut down a channel to protect the amp and speakers from damage, but its circuitry is outside the signal path so as not to degrade the sound quality. Anthem specifies the MCA 525 as having lower distortion than the MCA 50: a very low 0.001% THD at 100W at 1kHz, and 0.015% at 20kHz. Continuous power output, with one channel driven, is specced as 225W into 8 ohms, 400W into 4 ohms, or 600W into 2 ohms, all from 20Hz to 20kHz with less than 1% THD.

The large, solid, custom-designed binding posts are claimed to be more conductive than what was used previously, and the redesign maximizes the contact with and grip on speaker cables. Balanced (XLR) and unbalanced (RCA) input jacks, and trigger input and output are included. The soft blue LED surrounding the front power button illuminates when the MCA 525 is powered up, and flashes or glows red to indicate a fault. A switch on the rear panel sets the On Mode to Trigger-Only, Manual-On, or Auto-On. There are also two fuse bays, and an inlet for an IEC power cord. The MCA 525 measures 17.25”W x 6.63”H x 18.13”D and weighs a substantial but manageable 61 pounds.

For much of my listening, I used the MCA 525 with Anthem’s outstanding AVM 60 surround-sound processor. The MCA 525 also spent time with my Anthem Statement D2 SSP and an Oppo BDP-105 universal Blu-ray player, which I use as both source and SSP. Speakers comprised my usual assortment of KEF R-series models up front, Definitive Technology BP-8080STs as surrounds, and a pair of JL Audio E-Sub e112 subwoofers.

When I first listened to music through the MCA 525, I immediately knew that it sounded excellent. Melodies had a natural sense of ease and flow, and the imaging was very good. That its imaging wasn’t truly holographic shouldn’t be surprising in a $3499 multichannel amp, but it still presented a vivid soundstage and tight, solid sound. “White Wedding (Part 1),” from Billy Idol (24-bit/192kHz FLAC, Capitol/HDtracks), had plenty of bite in Idol’s snarling vocal and wicked guitar riffs, the drums hammered without boom, and the throbbing bass-guitar line was rich and dense yet still well delineated.

When I watched Pitch Perfect 2, the MCA 525 allowed me to clearly hear the intricate vocal harmonies in every channel. Not only was there a nice purity in the sounds of the voices emanating from multiple directions, I was also able to hear crowd and audience noise, conversations, and other sounds happening all around me even though some of the voices remained firmly rooted in the front channels. Even with all of these sounds occurring, the soundstage remained layered in the surround channels to provide excellent ambience. In a particularly engaging scene that consists of a riff-off among dueling a cappella ensembles, the beat-boxing of Das Sound Machine and the other groups provided a constant catchy beat that was reproduced especially clearly in the surrounds. There was also some delightful harmonizing by the Tonehangers, and an entertaining cameo by some of the Green Bay Packers performing “Bootylicious.” The MCA 525 let me easily hear the baritone (Josh Sitton) buried deep in the mix as he held down the rhythm, and to track the hulking NFL players as they moved around the stage. 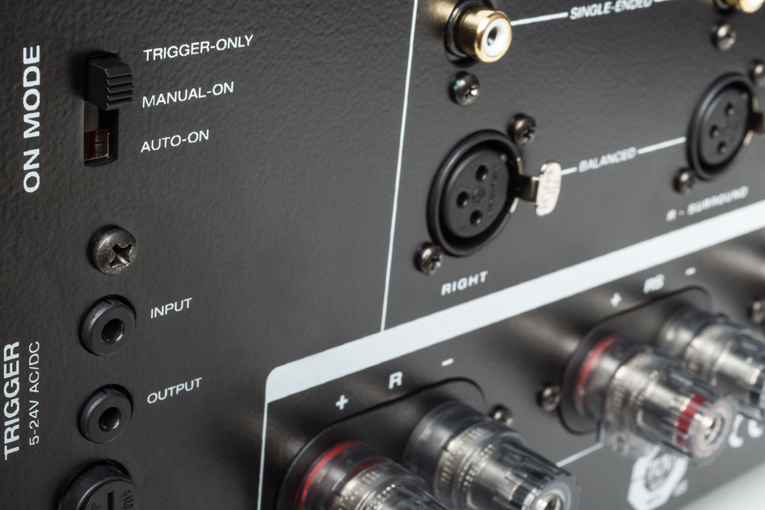 I’ve recently had some great-sounding amplifiers in my system, including Bel Canto Design’s e.One REF600M monoblocks ($4990/pair), Blue Circle Audio’s BC2K4sh ($5595), and Cyrus Audio’s Stereo 200 ($3499). While each of those amps outperformed the MCA 525, all of them cost as much as or more than the Anthem for only two channels of amplification. I had to remind myself that the moderately priced MCA 525 was performing at a level close to those accomplished stereo amps while providing three additional channels -- which meant that I could use it as the sole amplifier for my home-theater system.

The voices in “Song of Me and You,” from Adam Cohen’s We Go Home (16/44.1 FLAC, Rezolute Music), were captivating through the MCA 525. There was an immediacy and presence to his voice that blended perfectly with the backing vocals and small string section in the chorus. At the beginning of the more sweeping “Love Is,” the Anthem controlled the deep bass of my KEF R900 speakers in their reproduction of what sounds like a stomped foot. The KEFs can sound a bit loose at times, but the MCA 525 really controlled their woofers: the stomps started and stopped quickly without blending into one another, and sounded distinct from the simultaneous handclaps on every second stomp. When I really cranked the volume with this track, there was a huge soundstage on which Cohen’s voice appeared very large, but in precise scale with the instruments and backing voices. 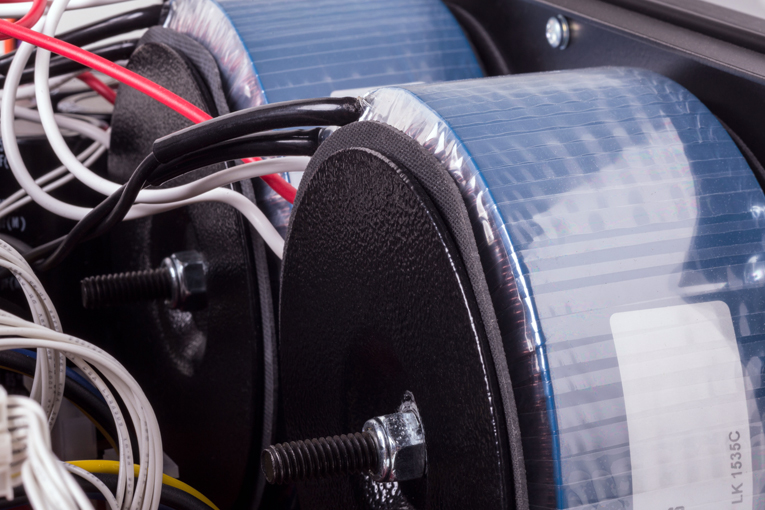 The forceful rhythm of Dusty Hill’s bass guitar in “Got Me Under Pressure,” from ZZ Top’s Eliminator (24/96 FLAC, Warner/Rhino/HDtracks), was slamming through the MCA 525, as were Billy Gibbons’s bluesy guitar licks. This gutsy amp had the power to drive the KEF R900s to high volumes with ease. I don’t enjoy ZZ Top’s follow-up album, Afterburner (24/44.1 FLAC. Warner/Rhino/HDtracks), as much because on it the band uses more synthesizers, particularly in such singles as “Velcro Fly” and “Sleeping Bag,” and has less of the straight-ahead blues-rock sound they’re known for. However, Afterburner has a bigger soundstage with more separation of instruments, and the MCA 525 did an excellent job of reproducing it all. It was also adept at clearly delineating the simple interplay of drums and electric and bass guitars in “Woke Up with Wood” and “Dipping Low (in the Lap of Luxury).”

The action thriller Nerve, starring Emma Roberts and Dave Franco, has one of the most musical and immersive soundtracks I’ve ever heard. The MCA 525 had sufficient power reserves that Rob Simonsen’s music and the foley effects were clear and powerful even when all five channels were extremely active. Nerve doesn’t boast a lot of the usual explosions and other bombastic sound effects, but the use of music is nearly constant, with plenty of loud, low percussion, especially in the surround channels. If you’ve ever doubted the need for high-fidelity electronics for the surrounds, Nerve will test the quality of whatever speakers and amps you use to drive those channels. With the MCA 525 driving my Definitive BP-8080ST surround speakers, the 360° soundfield was totally seamless and absolutely composed, with the musicality of a high-performance two-channel system. 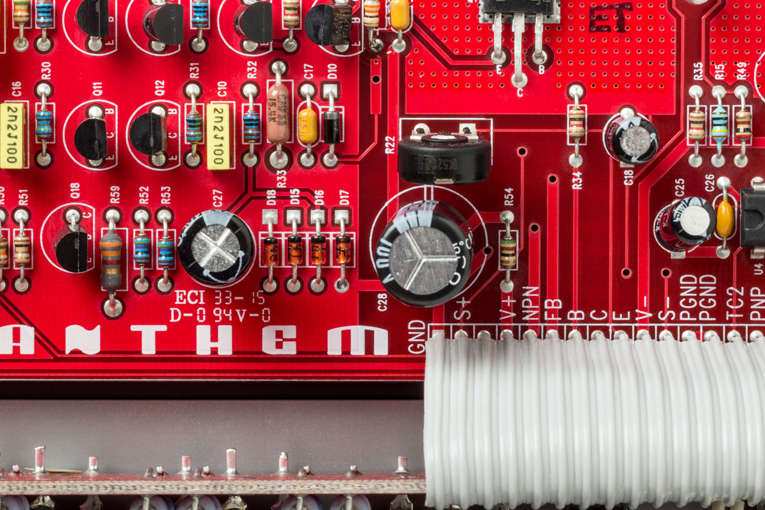 My current reference multichannel amplifier is NAD’s Masters Series M27, for its ultraclean, compellingly transparent sound, seven channels of amplification, and very reasonable price of $3999. The M27 uses Hypex Ncore class-D amp modules instead of the MCA 525’s more conventional class-AB design. The NAD’s cosmetics are quite striking, with its contrasting black panels and brushed-aluminum faceplate, especially compared to the unassuming appearance of the Anthem amp. But while the two amps are different in design and appearance, they sounded more similar than I would have guessed. With Nerve, both amps provided a thoroughly involving experience -- I had a hard time telling them apart. At very high volumes, the NAD did start to compress the sound a bit, probably due to its lower specified outputs of 180Wpc continuous and 300Wpc peak. Some of the loud percussive effects were a little more jarring than perhaps they should have been, even though the music remained smooth and powerful.

Both amps were very quiet, providing jet-“black” backgrounds, but the NAD sounded just a tad cleaner, making Adam Cohen’s voice sound slightly more palpable and immediate. However, the Anthem was better able to control the foot stomps in “Love Is,” which were not as tight through the M27. I went back and forth between the two amps with various films and two-channel recordings of music, and the differences between them remained pretty consistent, if occasionally they weren’t easy to hear. Overall, the Anthem MCA 525 was just a little smoother from top to bottom at high volumes, but the NAD does provide two additional channels for only $500 more -- a not insignificant difference if you’re contemplating a seven-channel system. 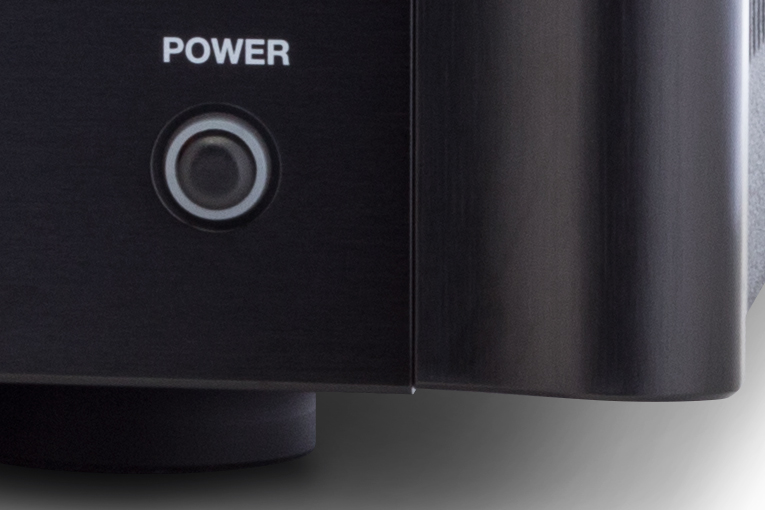 Although it’s been quite a while since I had Parasound’s Halo A 31 three-channel amplifier ($3295) in my system, I recall it as also having an iron-fisted grip on the bass and a refined sound overall -- though one somewhat richer than the MCA 525’s. I can’t say for sure whether the Anthem would match the Parasound for sheer output -- the Halo was a real beast in that regard -- but I had no complaints about the MCA 525’s ability to drive two or all five of its channels to high outputs when I needed it to. The five-channel Anthem also costs only slightly more than the three-channel Halo A 31. Parasound’s five-channel amp, the Halo A 51, retails for $4795, which I still consider a bargain given its outstanding performance.

While at $3499 the Anthem MCA 525 costs significantly more than an entry-level multichannel amplifier, that price is still relatively low when compared to higher-end products from other specialty audio manufacturers, and its understated looks might make you pass it by it when shopping for an amp for a high-performance multichannel system. That would be a shame. The MCA 525 is specced to output a very powerful 225W, and it sounds it. Not only that, its level of musicality is as good as or better than anything in its price class, and it will even challenge some more expensive amps. The MCA 525 may look unpretentious, but don’t underestimate it. Its excellent all-around performance makes it my favorite midpriced multichannel amp.