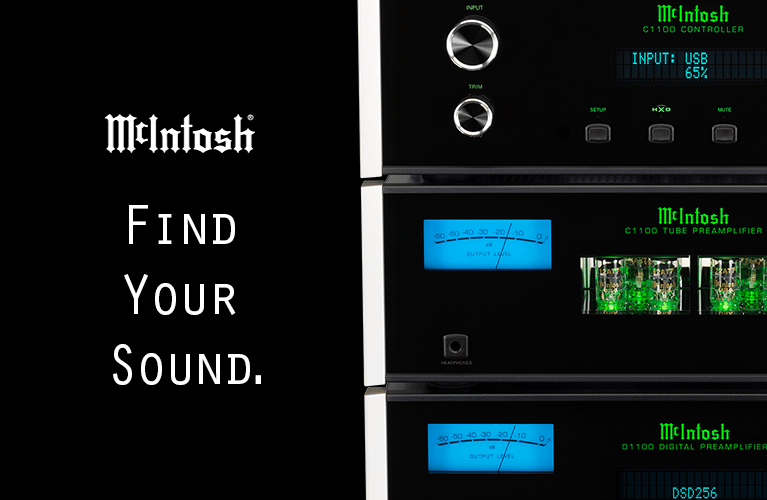 MartinLogan’s slogan is “Truth in Sound.” Like most speaker companies, they strive to make products that re-create the most complex musical passages as faithfully as possible. In their lines of large hybrid-electrostatic speakers, they try to do this by using an extremely thin, light membrane with excellent transient response. For optimal horizontal dispersion, the panel is curved. This panel is coupled to a conventional woofer cone to reproduce deep bass frequencies that the electrostatic panel cannot. 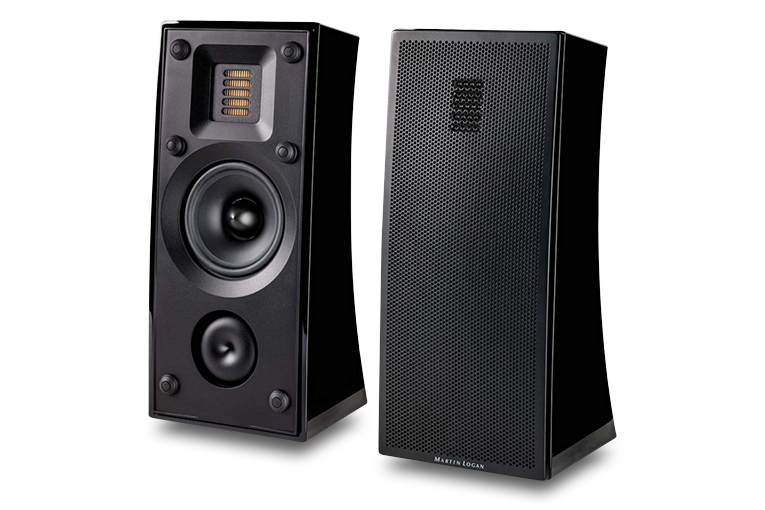 The Motion 4i is the larger of two bookshelf models in MartinLogan’s new Motion i series -- the smaller is the Motion 2i ($359.90/pair), which has a 3.5” woofer. There are also two larger models, the 6i ($559.90/pair) and 8i ($799.90/pair), both of which have in-line driver arrays of woofer-tweeter-woofer, and are suitable for use as center channels when positioned horizontally, or as left- or right-channel speakers when mounted vertically on a wall.

If you’re tired of boring, boxy speakers, the Motion 4i is for you. It comes in a single finish, Piano Black, which I think makes any speaker look great. Although the Motion 4i’s shape and size are basically that of a typical bookshelf speaker, its appearance and technology are anything but. The outer dimensions are 12.6”H x 5.6”W x 5.7”D at the base. Only the bottom surface is completely flat -- the top slopes down slightly toward the rear. The vertical sides of the speaker are curved, tapering to 5.6” wide and 3.35” at the top. The rear panel is concave, and the front baffle is slightly convex -- this is a really curvy speaker! High on the rear are recessed spring-type speaker-cable terminals, which work great with banana plugs but could be a bit difficult to connect bare wire to. The Motion 4i also comes with a wall-mounting bracket that allows the speaker to be angled downward toward the listening seat. This would make the Motion 4i ideal for wall-mounted height channels of a DTS:X or Dolby Atmos home-theater system. 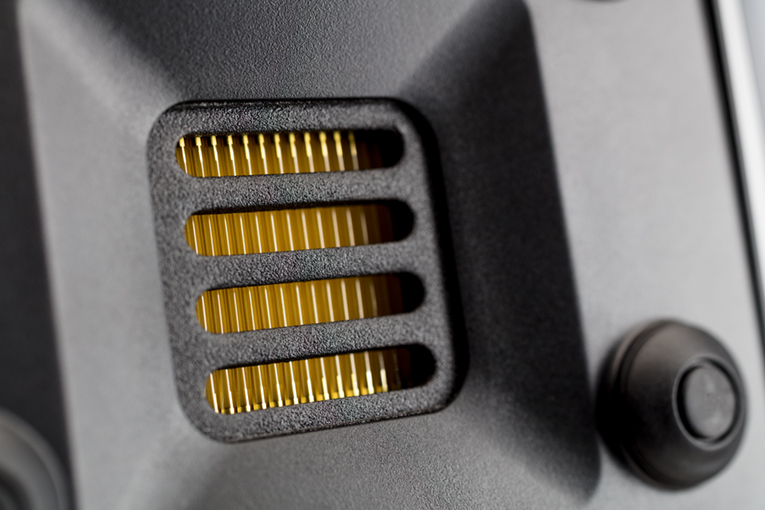 Rather than a conventional dome tweeter, the Motion 4i’s Folded Motion Tweeter (FMT) is a 5.25” x 1.75” membrane folded, accordion-style, into a 1” x 1.4” space. The membrane is positioned between permanent magnets, and embedded in its surface are electrical traces. The interaction of magnetic fields push and pull the membrane, squeezing and stretching it, folding and unfolding it, to vibrate the air and thus create soundwaves. The FMT’s dispersion pattern is restricted to 80° horizontal and 80° vertical, which somewhat mimics the dispersion patterns of MartinLogan’s curved electrostatic panels (although those panels’ horizontal dispersion is controlled even more, to 30°). Compare that to the 180° dispersion of a typical dome tweeter and you can see that your walls, ceiling, and floor will have less effect on soundwaves produced by the Motion 4i’s FMT.

The FMT is crossed over to a 4”-diameter paper-cone midrange-woofer at 2900Hz. To produce deeper bass than a 4” driver normally would, speaker makers often add a port to the speaker’s cabinet. This combines the woofer’s back and front waves, reinforcing the bass response, and letting a small-enclosure speaker produce more bass than could a sealed box of the same size. A conventional port is a short tube with a flared opening where it vents through the speaker’s front or rear panel. MartinLogan has taken this idea many steps further in their Cascading Bass Reflex Port, which forces the soundwaves through a much longer, curved path before dispersing them through the rear-firing port. The result is deeper bass than you’d normally get from such a small enclosure. The Motion 4i’s specified frequency response is 70Hz-23kHz, ±3dB, which matches well with the FRs of conventional box speakers that have 5”- or even 6”-diameter woofers. 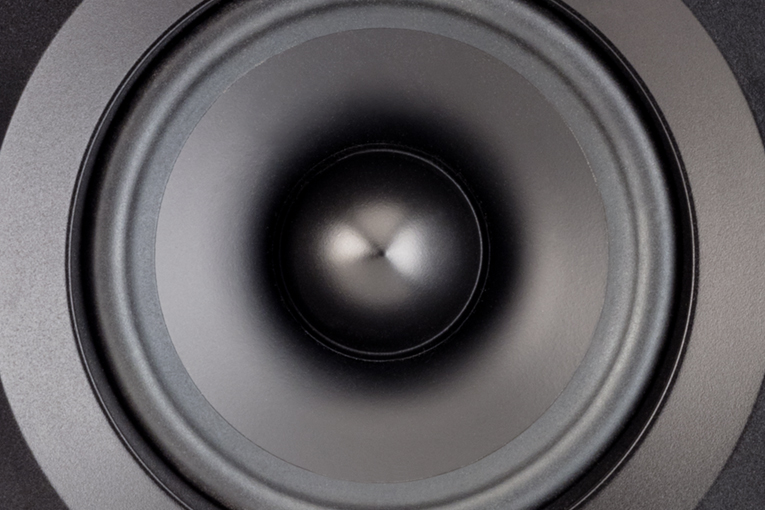 The Motion 4i’s specified sensitivity of 90dB/W/m should make it a relatively easy load for any amplifier, though its claimed nominal impedance of 4 ohms might make it a challenge for low-current amps. Most modern audio/video receivers should have no problem driving a pair of Motion 4i’s to loud levels -- my Anthem MRX 720 had no problems doing so.

I set up the Motion 4i speakers in my usual listening room, and drove them with my Anthem MRX 720 A/V receiver. The room is 23’L x 16’W x 8’H, with my gear set up at one end of the long wall. I set the speakers on 24”-high metal stands about 6’ apart, 2’ from the front wall, and 10’ from my listening seat, and toed them in to my listening seat. I turned off Anthem Room Correction (ARC) and my subwoofer, but ran some tests with both to hear how well they blended together. I played music through the Anthem MRX 720 using DTS’s Play-Fi app on my iPad. 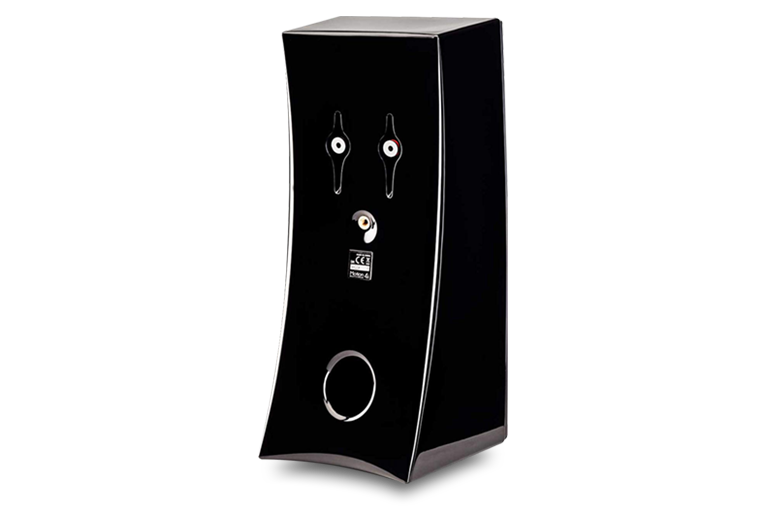 My first impression of the Motion 4i’s sound was of the clarity of voices. Marta Gomez’s voice in “Lucia,” from her Entre Cada Palabra (24-bit/96kHz FLAC, Chesky/HDtracks), floated free of the cabinets with a vibrancy that was remarkable for these speakers’ small size and low cost. This impression of clarity was reinforced by the title track of Holly Cole’s Temptation (16/44.1 FLAC, Alert). The sound of her dog barking and whimpering in the background stood out from the mix, these sounds far more evident than through other speakers I’ve had in my system. I confirmed the extended frequency response of the Motion 4i’s FMT tweeter by measuring its in-room response with the ARC system built into my Anthem MRX 720. The plot showed flat response out to 20kHz, which was very noticeable when I listened to “Code Cool,” from Patricia Barber’s Smash (24/192 FLAC, Concord/HDtracks). A passage in this track that’s mostly for cymbals and other percussion can sound flat through conventional dome tweeters, but those sounds were brilliantly reproduced through the MartinLogans’ FMTs, with a realism that made it feel as if Jon Deitemyer’s hi-hat were right there in my room.

Another remarkable aspect of the Motion 4i’s was their breadth of soundstage. These speakers seemed to disappear as they presented me with solid images. A good example of this was “Robot Lovers,” from Casey Abrams’s Put a Spell on You (24/192 FLAC, Chesky/HDtracks). That this album was recorded in a church was readily apparent through the MartinLogans -- the reverberation gave the sense of a large venue. It’s easy to picture Taylor Tesler playing guitar at left, Abrams singing and playing double bass at center, and Jacob Scesney playing drums at the right. In the middle of this track, when Scesney switches to saxophone and walks around the room as he plays, I could easily follow his movements through the Motion 4i’s. Nor were the sounds of his drums confined to the speaker boundaries -- they imaged well beyond the right speaker’s outer side panel. 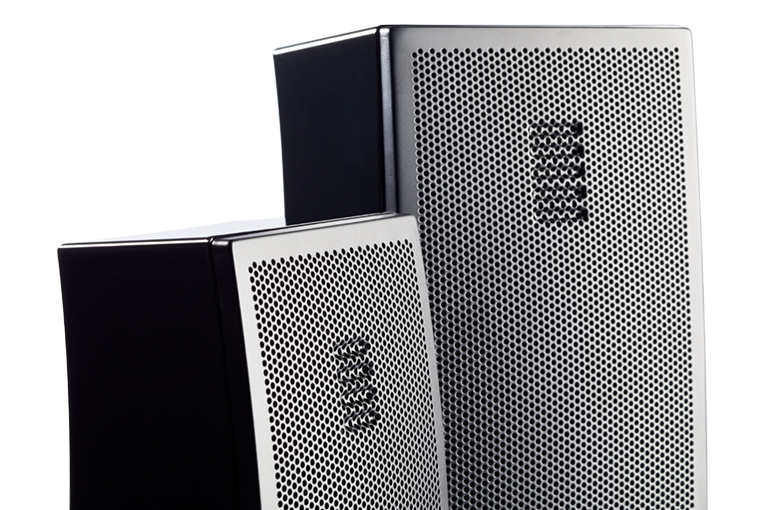 When I evaluate a small speaker’s bass response, one of the first things I listen for is if there’s enough bass for a satisfying sound without a subwoofer. I’ve found that most bookshelf speakers with a 1” tweeter and a 6” woofer meet that standard, but that smaller speakers seldom do -- the 4” woofer of PSB’s Imagine Mini being an exception. The MartinLogan Motion 4i was another exception. A prominent electronic bass line runs through “Within,” from Daft Punk’s Random Access Memories (24/88.2 FLAC, Columbia/HDtracks) -- I didn’t expect a 4” woofer to energize my room with 40Hz bass, and sure enough, the little Motion 4i’s didn’t. But I was surprised at just how textured and layered the bass did sound through the MartinLogans. Instead of an indistinct rumble, I could hear the pitch of each bass note.

If you’re more interested in a full-range speaker than a bookshelf speaker, think about pairing the Motion 4i with a good subwoofer, such as MartinLogan’s own Dynamo 600X ($599.95). When I ran ARC on the Anthem MRX 720 receiver with this sub/sat system, the software determined that the crossover frequency from the Motion 4i would be a rather high 110Hz, but it blended seamlessly with the Dynamo 600X. This combo let me hear even deeper bass -- such as Abrams’s double bass in his cover of “Lost and Lookin’.” Although the Motion 4i was no slouch in terms of dynamics, with the Dynamo 600X the combo seemed to have a limitless ability to play loud without letting the cabinets color the sound. When I cranked it up, the front of the soundstage also became taller and wider.

A good comparison for the MartinLogan Motion 4i is the Wharfedale Diamond 220, a classic bookshelf speaker with a 1” soft-dome tweeter and a 5” woofer. There’s no boxier-looking speaker than the Diamond 220 -- it’s all straight lines and right angles. Compare it with the curvy Motion 4i and you can’t get two more different-looking bookshelf speakers. The Wharfedale retails for $349/pair, about $150 less than the MartinLogan.

When I compared the two speakers in back-to-back listening sessions, there was a startling difference in their sounds. The Motion 4i’s highs were much more open, airy, and boundless. The Diamond 220 was smooth in the highs, but darker overall. This made, say, the cymbals in Patricia Barber’s “Code Cool” sound less palpable than through the Motion 4i’s, whose extended highs let them create huge soundstages. In “Robot Lovers,” Casey Abrams’s bass occupied a large space in the middle of my room through the Motion 4i’s, a space that was much higher than the tops of the speakers. But through the Diamond 220s, the image shrank to the height of the speakers. Lateral imaging of both pairs of speakers was nearly identical, with the Motion 4i’s able to image slightly outside the speakers’ outer side panels.

In terms of bass weight, the Diamond 220 slightly bested the Motion 4i, going slightly deeper and louder. However, the Wharfedale is less sensitive -- it needed more amplifier power than the Motion 4i to achieve the same volume level. But either speaker could go low enough that it should blend well with a subwoofer.

I own and love the Wharfedale Diamond 220s, but it was clear that the MartinLogan Motion 4i’s were better speakers. However, the Wharfedales might be more appropriate in some situations. The Motion 4i’s extended highs might be overwhelming in a reflective room with drywall, or large windows and few furnishings. The Diamond 220 might also pair better with brighter-sounding electronics.

With the Motion 4i, MartinLogan set themselves the challenge of producing something like the sound of their large electrostatic speakers from a box speaker of much smaller size and much lower price. The last MartinLogan electrostatic I listened to was the Masterpiece Classic ESL 9 ($6495/pair). They brought realism to every track I played, and the speakers were able to “disappear” into huge soundstages. In the Listening section of this review I describe similar traits in the Motion 4i. Is the Motion 4i as good as the ESL 9? Heck no. But is the spirit of the ESL 9 audible in the Motion 4i? Heck yeah! If you’re looking for something different, and an involving listening experience, I highly recommend that you give the MartinLogan Motion 4i an audition.