A reader recently emailed me to berate me for dwelling too much on packaging materials, and the fact that I seem to be the only audio writer who gives a darn about the distinction between expanded polystyrene and dense polyethylene and the like. To that reader (you know who you are), I present the following photo as justification for why I care. Delivery people these days—at least in my neck of the temperate rainforest—view “fragile” stickers as more of a challenge than a warning. 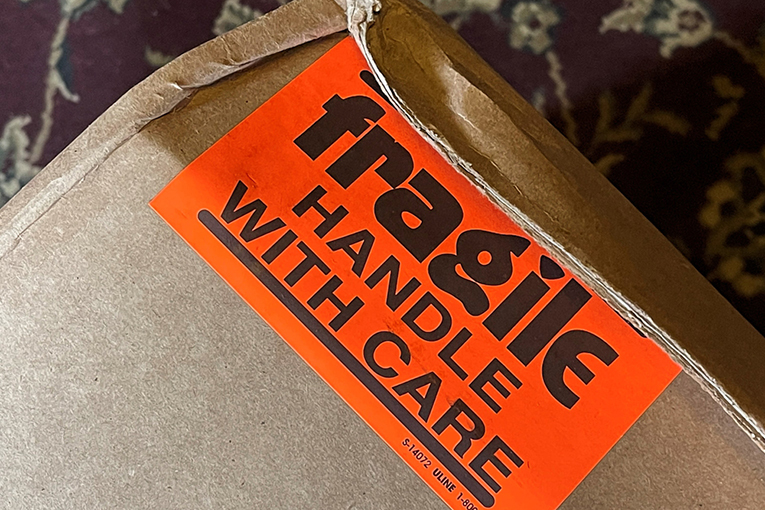 It’s the sort of sight that fills a gear reviewer with dread, mostly because these amps and speakers and source devices that migrate through my home on a monthly basis are not my own. I am merely their temporary caretaker. And yeah, you could argue that I’m not the one who squished the shipping box for Rotel’s new A12MKII stereo integrated amplifier ($1099.99 USD)—because I didn’t—but I’m still the one who has to explain that it got squished on my watch, and if the contents thereof are damaged, they need to be replaced posthaste. 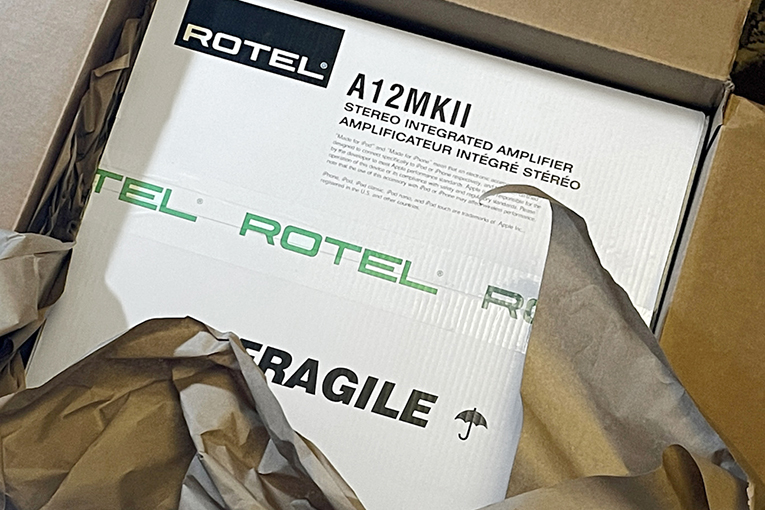 Thankfully, a quick peek under the lid reveals that the mangled box is not the proper packaging for the amp. Its actual box is surrounded by a good bit of brown paper packing and a not-insignificant buffer of air. The box itself is totally fine. At least apparently so. Still, my anxiety wouldn’t subside until I actually cracked the box and confirmed that the amp arrived safely. 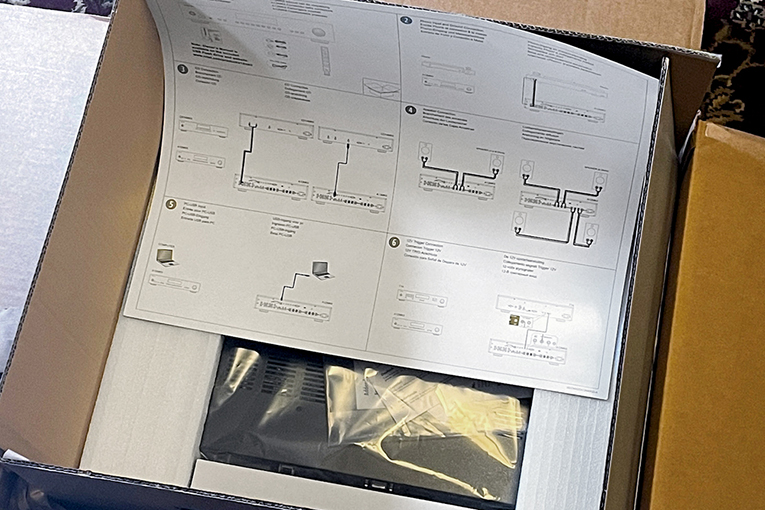 The first thing you actually encounter when opening the box is a big insert, the flipside of which has diagrammatic instructions for setting up a stereo system—always a nice touch for products such as the A12MKII, which seems to be aimed at the beginner audio enthusiast in search of value and performance in equal measures, as well as old fellers like me who love a bargain. 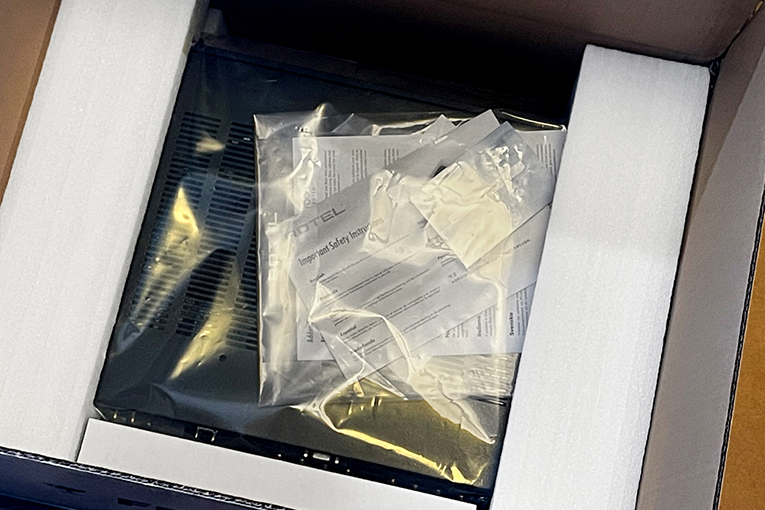 Pulling up the insert also reveals a first good look at the firm polyethylene foam that hopefully provided good protection against the roughhousing the box was subjected to. I’m also, at this point, getting a strong sense of déjà vu, as the presentation of the A12MKII is unsurprisingly similar to that of the A11 Tribute I reviewed last year. By that, I mean there’s not a lot of pageantry, no white gloves, no attempt to ape Apple in product presentation. The box and padding are there to do a job, not put on a show. 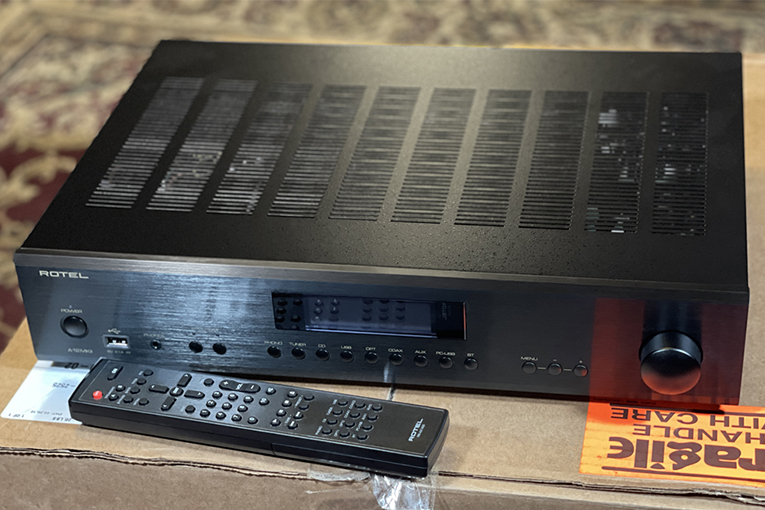 Pulling the A12MKII out of its womb strengthens that sense of déjà vu. Aside from the addition of a front-panel USB port and some extra input buttons, as well as the lack of a Tribute badge, you’d be hard-pressed to tell this amp from the A11. That’s a good thing. I very much liked the straightforward and uncluttered design of that amp, and I’m finding myself falling in love with it all over again—especially the volume knob. At the risk of sounding like a broken record, the only thing I’m not digging is the 3.5mm headphone jack. But I do very much dig that Rotel includes a Type-B USB cable. 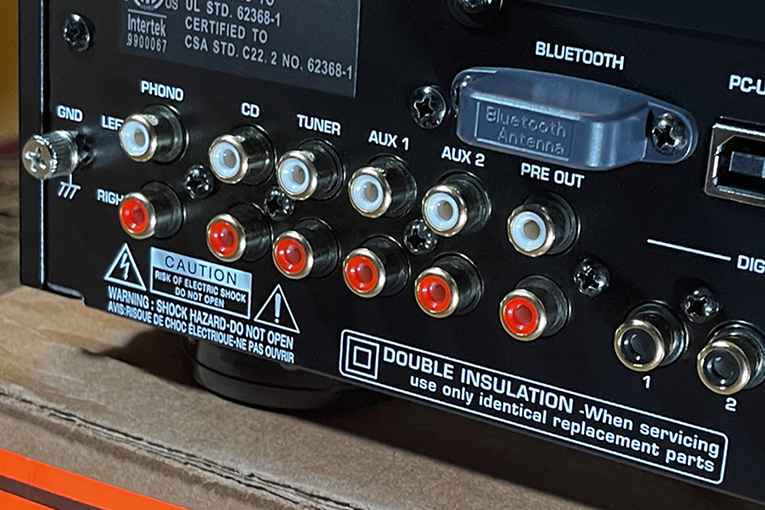 Around back, the A12MKII sets itself apart purely by virtue of all its extra inputs. It carries over the analog connectivity of the A11 Tribute—a moving-magnet phono in, along with CD, Tuner, Aux 1, and Aux 2 inputs, as well as preamp outs and standard control connections—but adds a USB power port, a USB-DAC input, Rotel Link connectivity, and a pair each of coaxial RCA and optical TosLink digital inputs.

One other difference that’s not obvious from a quick glance is that the A12MKII’s Bluetooth antenna lacks the A11 Tribute’s AAC codec support. That won’t be an issue if your portable audio device supports aptX, but we Apple users are left with bog-standard SBC, unfortunately. 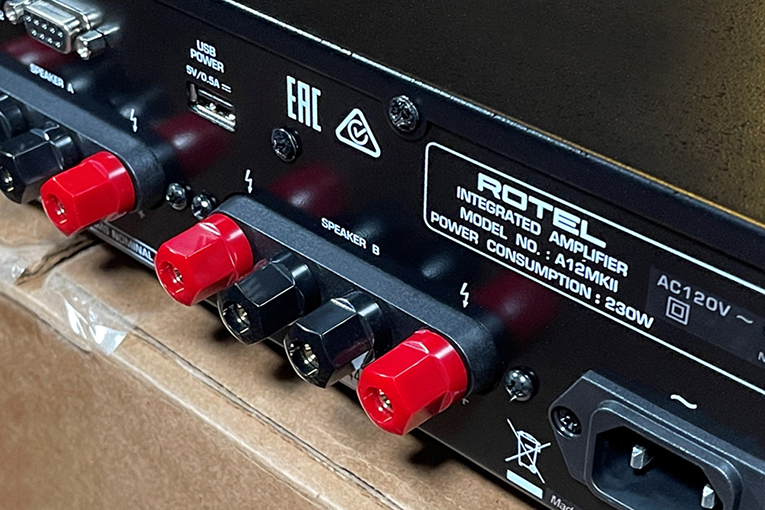 Speaker-level connections come in the form of the same A-and-B five-way binding posts, which are nice and sturdy, if a bit utilitarian looking, and accept banana plugs perfectly. If you rely on bare-wire connections or spades, you’ll be happy to learn that the posts unscrew without much effort at all, but also provide a snug and stable connection.

And with that, there really isn’t much else to say until I can plug it all in and start listening. With all the aesthetic similarities between the A11 Tribute and A12MKII, it’s hard not to wonder if they’ll sound just as similar. But the answer to that question will of course have to wait for my full review, coming soon to SoundStage! Access.