Every Audiophile Needs to Do This Annually

Although I love my dad with all my heart and get along with him swimmingly, we are very different people, with different interests and significantly different life philosophies. Really, the main things we have in common are our mutual love of Corvettes and our equally unhealthy obsession with the weather. So we spend a lot of time talking about both. 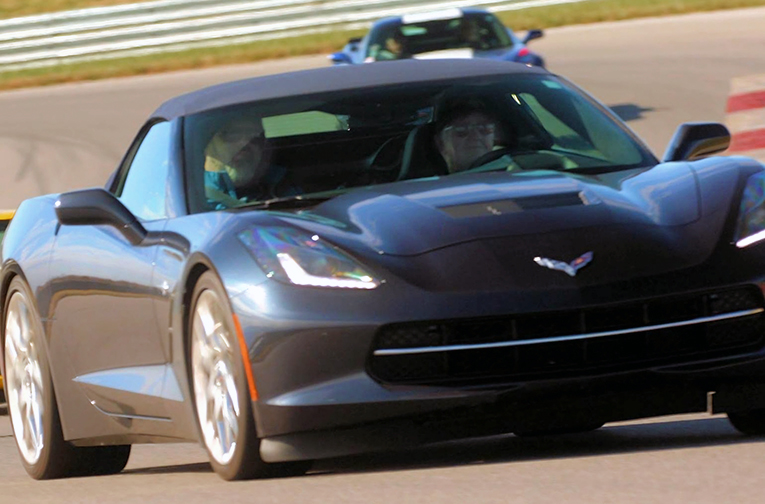 I mention that only because it’s not unusual for me to receive a call from him similar to the one I got just before Christmas: “Hey, I was headed home with the ’Vette yesterday and hit a nasty downpour. Checked my rain gauge this morning and it said I got 2″.”

He was, to say the least, skeptical. “How do you know that’s accurate?”

And that’s exactly the right question to ask. But to my credit, I had an answer. I do a drip test to check the calibration of the rain gauge built into my Davis Instruments Vantage Vue weather station at least once a quarter when I clean it. And I’ve never found it to be off by more than a hundredth of an inch. 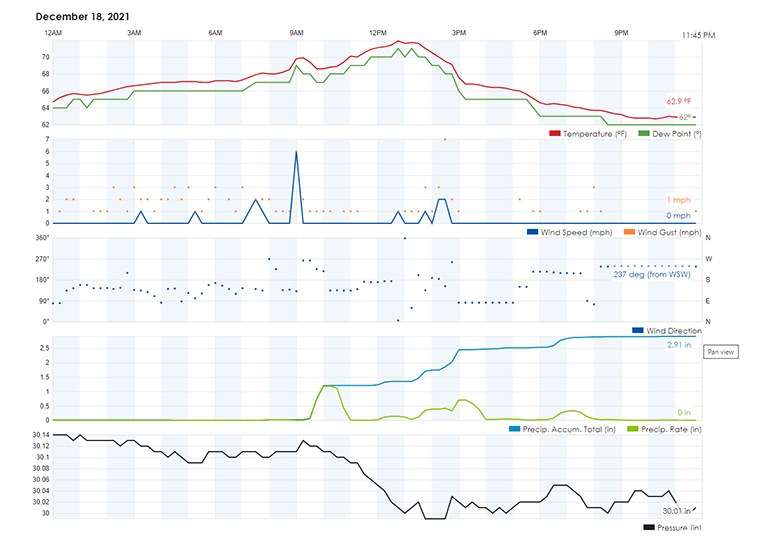 Why the hell am I telling you any of this, and why should you care? It really boils down to the fact that I’ve been telling this story a lot in the past few weeks in response to emails about a recent editorial titled “The Most Dangerous Myth in Audio.”

I expected that article to get some attention. Indeed, Brent Butterworth and I focused on its central argument in a recent episode of the SoundStage! Audiophile Podcast. What I didn’t expect was for so many readers (and colleagues!) to home in on the last three paragraphs, in which I grappled with my declining high-frequency hearing acuity. The phrase that seemed to generate the most interest was “my annual self-administered hearing test.”

The correspondence mainly boiled down to two different questions: “how?” and “why?” And since most people who reached out to me fell into the former camp, I’ll address that question first.

Just a forewarning: this next section is going to start out simple and straightforward and devolve into messiness by the end. Because there are three main tools that I use to test my hearing, and although the first two are pretty defensible from a scientific standpoint, the last one involves some eyeballing and squinting and wouldn’t stand up to peer review.

But let’s start on solid ground. The main tool I use to test my hearing is an app called Mimi. It’s available on Android and iOS, and though I cannot speak to the former, the latter is super easy to use and delivers what I think are good and useful results.

When you first launch the app, you have a choice between a masked threshold test—which gauges your hearing acuity in the presence of noise—and a pure tone threshold test that’s more in line with a standard hearing test. I do both tests, but all the audiograms you’ve seen me sharing on SoundStage! in the past few months have come from the latter.

When you select the pure tone threshold test, the next step is to enter the year you were born (which is starting to feel like spinning the big wheel on The Price Is Right these days, at least for me). Then, on iOS, you have a list of calibrated headphones from which to choose before starting your hearing test: Apple EarPods, AirPods, and AirPods Pro, as well as the Sennheiser HDA 200 and HDA 300 models.

At any rate, perhaps the most difficult thing about the pure tone threshold test is that you have to find a super-quiet environment, even if your headphones have good passive isolation. If your smartphone’s microphone senses an increase in noise, the app will pause the test and give you a warning. One of the reasons I generally prefer to do my test in the winter is because the noise from my HVAC system is enough to throw a flag and shut the test down.

If you can get through the test without any noise intrusion, though, you’ll get your results in the form of an audiogram that shows any hearing loss you might have in the spectrum from 250Hz to 8kHz. Here’s an example of three recent audiograms from Mimi: one from before I got COVID-19; one during the worst of my symptoms, as I went nearly completely deaf in one ear due to Eustachian-tube dysfunction; and one from a few days after my hearing started to return. I wrote a blog post about that whole kerfuffle for SoundStage! Global, if you’re interested in the deets. My hearing is back to 100% now, thankfully.

Hang on, though—those of you who emailed me about the “Most Dangerous Myth” article may have noticed something peculiar: in that piece, I said that my hearing starts to decline significantly at around 15.8kHz. But Mimi only tests up to 8kHz. So how can I make that claim? Well, here’s where things start to get messy.

How I test my high-frequency hearing acuity above 8000Hz

There used to be a wonderful test online that ran pure tone threshold tests from 20Hz to 20kHz, but if memory serves me correctly, I stopped using it because it required some funky plug-in that no longer works with any of my browsers.

These days, I employ the High Frequency Range Test (8kHz to 22kHz) on audiocheck.net, and it comes in two different forms. There’s a sighted test, which plays a -9dbFS sweeping sine tone from 22kHz down to 8kHz, with a voiceover announcing every 1kHz milestone. If I’m looking for a rough estimation of my high-frequency hearing threshold, this is a good place to start. When the voiceover says “16k,” I think I can kinda start to hear the faintest high-frequency squeal creeping in. By the time he announces “15k,” that tone is like an ice pick straight to my brain.

I then take those data and jump to the High Frequency Audibility Blind Test page, starting with the 16 kHz Upper Hearing Limit test. These consist of A/B/X tests using two different audio files: one is full-bandwidth white noise; the other is low-pass filtered white noise with sonic content above a certain specified frequency removed.

Although I thought I heard a 16kHz sine tone in the sighted test, the blind test let me know I don’t have any meaningful acuity at that frequency, as I couldn’t reliably and consistently tell the full-bandwidth white noise from the 16kHz low-passed white noise. 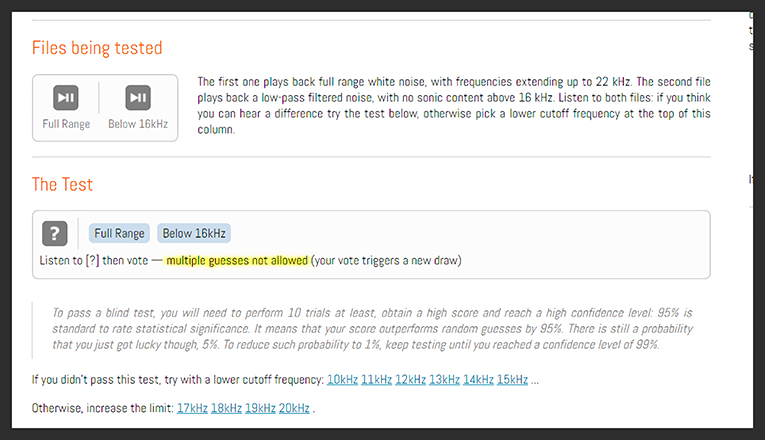 Switch to the 15 kHz Upper Hearing Limit test, though, and I have zero trouble telling them apart repeatedly. So we can safely say that my upper hearing limit is somewhere between 15kHz and 16kHz, which would be a satisfying result for any sane person, given that—if my math is correct—there’s only 0.093 of an octave’s difference between those two extremes.

But no one in their right mind has ever accused me of being wholly sane.

So how do I get a more precise measure? By sacrificing accuracy on the altar of ridiculousness. Really, what it boils down to is this: I fire up a frequency generator, load it up to the lower of the two frequencies I took from the blind upper-hearing-limit test (in this case 15kHz), and adjust the volume to the point where I can just barely hear the signal. Then I increase the frequency slowly, and as the signal becomes inaudible, I increase the gain a little at a time so I can hear the test tone again. Once the output of the signal generator is 3dB higher than where I started, I stop. Most recently, that puts me at around 15.8kHz, which isn’t a scientific result by any means, but it’s close enough for journalistic work. 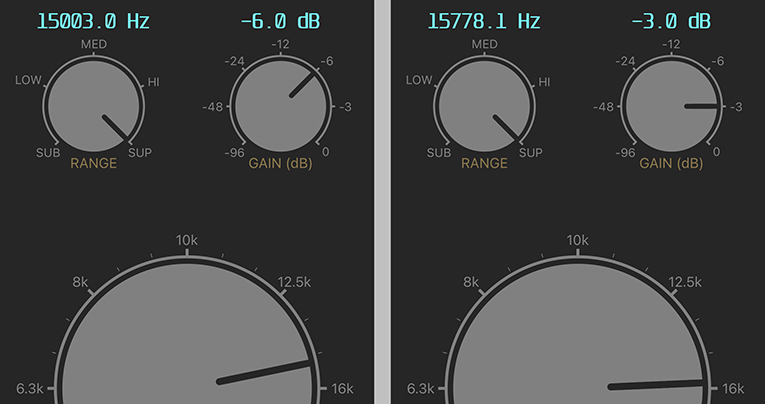 But why bother with all this, especially the silliness at the end?

As to the value of any or all of this, I do it for a few reasons. Firstly, I’ve always babied my ears, even before I started writing about audio in my late 20s. I am on the autism spectrum, and my main sensory sensitivity is to sound. I always make a point of wearing my shooting-range earplugs if I’m going to be in any noisy environment for more than a few minutes. And given that I’m fascinated by data of almost any sort, I test my hearing regularly to gauge how well the regular use of hearing protection has served me.

I also, of course, do it so that I’ll have advanced warning of when I need to start seeing an actual audiologist on the regular. I watched my dad go through a frog-in-a-pot process whereby he didn’t realize (or wouldn’t admit) that his ears were dead until they were really most sincerely dead, and he hasn’t adapted to wearing hearing aids well because it’s such a stark contrast for him.

But perhaps most importantly for you, dear reader, I’ll loop back to that digression with which I kicked off this diatribe. When I’m reviewing audio gear, my ears are my main instrument, the way my Davis Instruments Vantage Vue weather station is my instrument of choice for logging and archiving weather data. And I need to make sure I understand the capabilities—and limitations—of both.

If I had told you a decade ago that I had a preference for sharp roll-off linear-phase PCM DAC filters, well, that would have had a weensy bit more weight than it does today. And in coming years, such preferences will become purely academic. If you’re using my reviews as one metric by which to decide how to spend your money, you have a right to know the limits of my hearing.

If you’re a 50-year-old male, as am I, chances are good that your hearing is no better than mine, and maybe it doesn’t make much difference. If you’re in your late teens or early 20s and have good hearing, there’s almost no question that you can hear things I cannot. And I’m not saying that’s reason enough to discount my subjective impressions—I hope it’s not, at any rate—but it should determine how much weight you give them.

So, yeah, that’s why I test my hearing at least annually, and if you’re an audiophile or a colleague in the industry, I think you should too. Maybe just stick to the Mimi app on iOS and the high-frequency hearing tests from audiocheck.net, though, because anything beyond that is purely to sate my own curiosity and is dubious at best in terms of veracity.