One of my favorite puzzle manufacturers is a company called GAN. It makes a wide variety of WCA (World Cube Association) puzzles, but it’s best known for its flagship 3×3s, which most of you would probably refer to as Rubik’s Cubes, although no serious cuber uses Rubik’s-branded cubes anymore.

Why am I bringing all of this up? Because GAN realized something a long time ago: it’s not enough to simply build a better 3×3 cube. You have to sell it as well. And part of what justifies the $70-to-$80 cost of its flagship magnetic models is the experience of unboxing one. The outer carton gives a hint at the technology inside with a tantalizing CAD line drawing, but it’s really about the sparkle and pizazz. Unboxing a GAN12 Maglev is an experience at every step of the way. Once you actually get to the cube itself, your anticipation is positively palpable.

You could say much the same about Samsung’s packaging for the new Galaxy Note, or Bokksu’s presentation of its monthly Japanese snack boxes, which make digging in for another nibble not only a luxurious experience but also an informative one.

Sadly, though, there’s not a lot of that going on in the world of high-performance audio at the lower end of the price range, on which I focus my energies. More often than not, I’m more concerned with the safety and security of the product as it’s manhandled by delivery folks than I am about the experience of the unboxing process. Yes, getting to the product I’m reviewing is a rewarding and informative experience in most cases, but it’s more about the product than the packaging.

But then there’s Marantz.

After having unboxed the company’s PM-KI Ruby integrated amp just over a year ago, I figured I knew what I was in for when digging into the recently released Model 40n ($2499, all prices USD). Pure swank. Since the Model 40n sells for $1500 less than the PM-KI Ruby, though, I wasn’t expecting quite the same level of swank. But to my surprise, Marantz upped the luxe factor significantly. 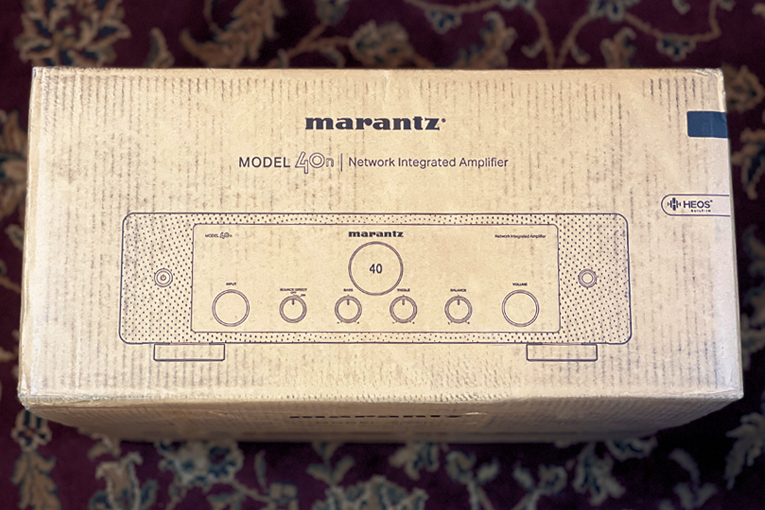 Just look at that sleek CAD drawing! It gives you the sense that there’s something a little different about the design of the amp, but it’s more of a tease than a full-blown preview.

Flip the box over on its butt, and you get a taste of the formats supported by this HEOS-capable Modern Musical Luxury integrated amp, as well as its connectivity. But that’s just the start. 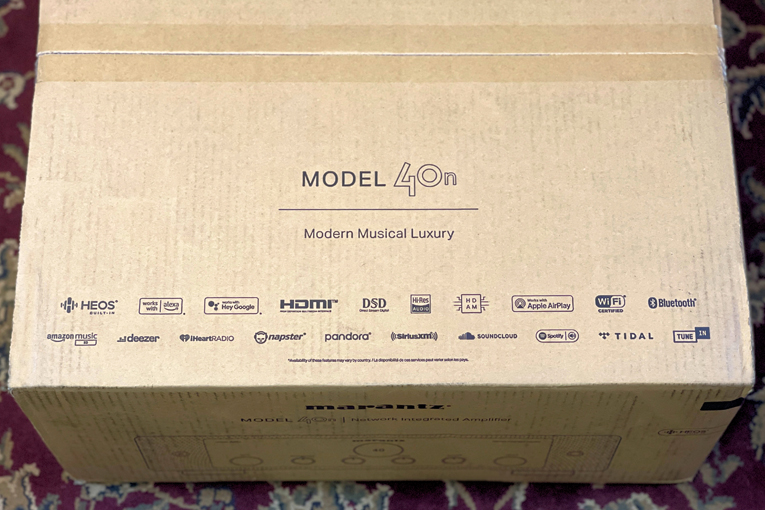 It isn’t until you crack the case and start to dig into its contents that you really get a sense of the overall presentation. First up, you see the accessories box, which is nicely constructed and labeled with a sort of bronze metallic lettering that doesn’t show up nearly as well in photos as it does in person. Is this necessary? Of course it isn’t. But what about our hobby is based on necessity? $2500 may not seem like a lot of money in the overall context of the audiophile market, but the folks at Marantz know it’s a luxury ask for someone just getting into high-performance audio, and they’ve decided to treat the amp like a luxury experience. Kudos, I say. 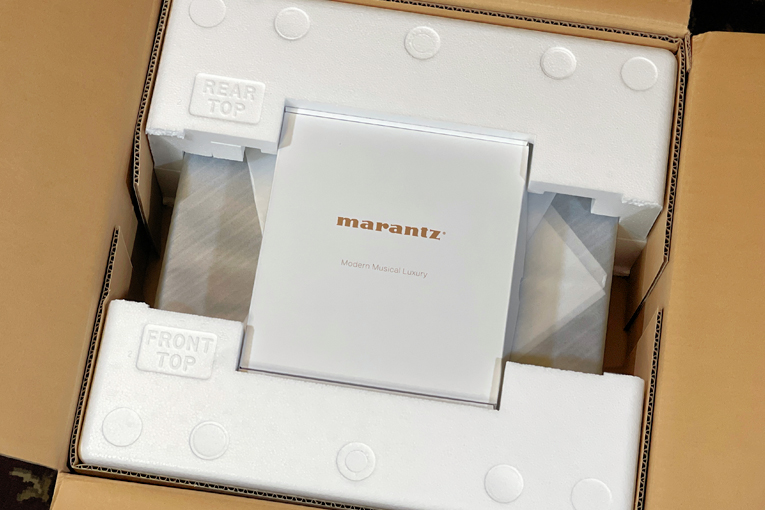 Inside the accessories box resides the remote control, which is chonky, robust, and great-feeling in the hand due to its metal faceplate. I’ve had only a few moments to play around with the remote, but so far it seems well laid out and quite ergonomic despite its apparent boxiness. When I hold the controller with its weight distributed evenly in my hand, my thumb rests right on the Volume + button and can easily reach the d-pad below. Honestly, that’s 99% of what I care about anyway. 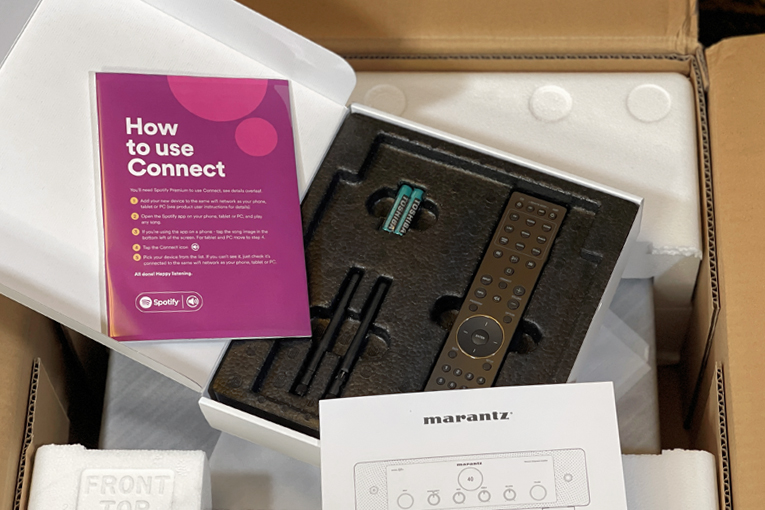 Marantz has also secured the amp with four sculpted pieces of expanded polystyrene, which is nice since you can lift off the top front and back pieces without pulling the amp all the way out of the box. That’s handy with any amp, given that it makes things less fiddly, but it’s especially welcomed with an amp whose weight is so apparently out of proportion with its size. To borrow a phrase from my dad, “This thing is heavier than a fat foal.” Actually, it tips the scales at 16.7kg (~37 pounds). 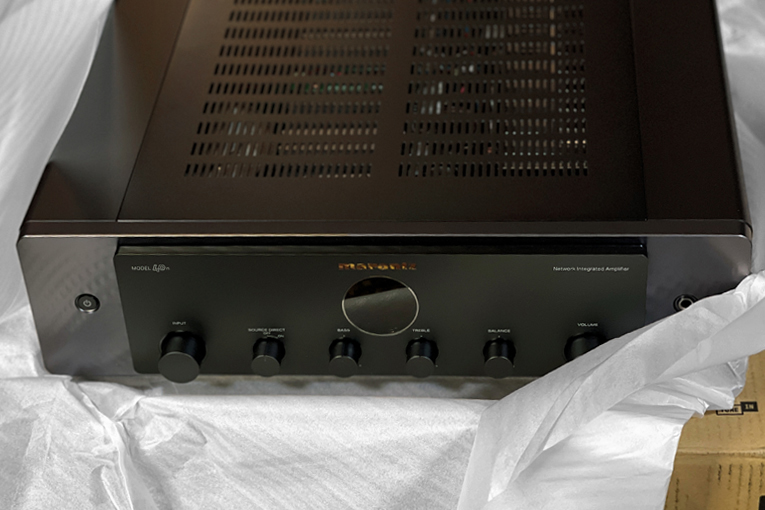 As with the PM-KI Ruby, the Model 40n is also wrapped up in thick air-foam paper, folded like a napkin at a bougie restaurant, and secured with a nice sticker. Again, the company could have gone with something a little less ostentatious, but why shouldn’t opening an integrated amp feel like unwrapping a holiday gift?

With the amp unwrapped, I finally got my first real look at its façade in person, and I have to say that my photos do it no more justice than did the line-drawing on the side of the box. The two-tone design and the beautiful build quality were the first things to catch my attention. The knobs also just feel fancy as heck. Each of the balance and tone controls centers very obviously with a tactile bump, and the volume knob feels positively massive despite being relatively small. 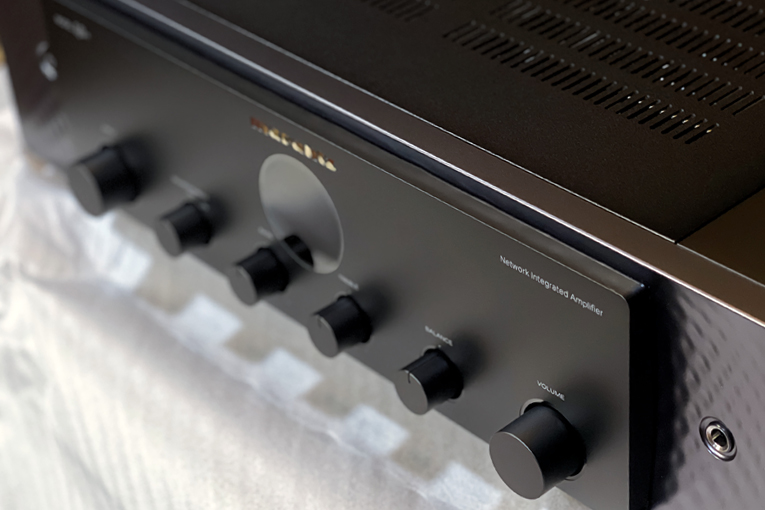 The amp also supports a full-size 1/4″ headphone jack, thank goodness. And although you can’t see it here since I hadn’t plugged the Model 40n into power yet, that little recess to the left of the headphone output (as well as its mirror image on the other side of the input-selector knob) sports subtle edge lighting that really makes the entire faceplate pop, even in a darkened room. (But not much—don’t worry. And it’s easily dimmable.) 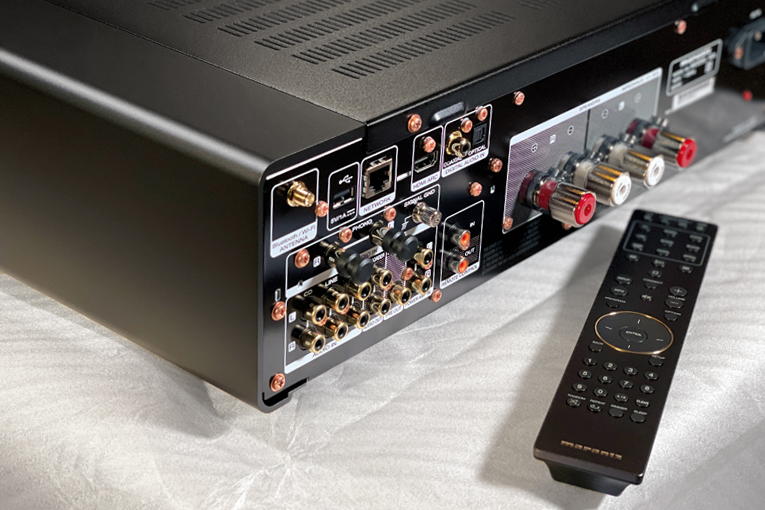 And here we arrive at the I/O section, which is quite tidy and well-grouped. To the left you’ll find the analog and digital ins (except for one of the Bluetooth antennas, which screws in on the other side of the back panel, symmetrical with the one you can see here), as well as the network connectivity, the HDMI ARC port, and the dedicated subwoofer out. Toward the middle are the gorgeous Marantz SPKT-1+ five-way binding posts, which are so well-spaced from the rest of the I/O that I cannot imagine this thing being anything less than a cinch to install and configure.

But you’ll have to wait for my upcoming feature review to read about that. In the meantime, make sure you swing by the SoundStage! Network YouTube channel and watch our overlord Jeff Fritz’s interview with Gary Dayton, who oversees global marketing for Marantz, about the design of the amp and its intended place in the market.