What Makes a Good Reference Recording?

If you’re shopping for new gear—especially as a relatively new audio enthusiast—one of the most important decisions you can make is which songs to use as test material when auditioning an amp or preamp or—most importantly—a pair of speakers. And the choice of which material is most illustrative isn’t always super intuitive.

To wit: I positively adore Björk’s 2001 solo effort Vespertine, a quieter, more textural follow-up to the aggressive, in-your-face electronic-volcanic eruption of 1997’s Homogenic. Of all the Icelandic artist’s albums, Vespertine may well be my favorite from beginning to end. But I’ve never used a single selection from the album as reference material in the course of a product review, and I wouldn’t in a million years use it as a basis for deciding whether or not a particular piece of gear meets my needs.

In fact, I think it may be the only Björk from which I’ve never pulled any reference tracks for reviews. Her second post-Sugarcubes record, Post, is particularly fantastic for making sure that an amp connected to a big pair of three-way towers is stable below 4 ohms and has a competent power supply. By my hands, “Hyperballad”—one of my all-time favorite compositions—has wrecked more speakers than I’d care to count when it pushed amps beyond their capabilities and fried a voice coil or five. (You’d think I would have learned after the first one, but no one has ever accused me of being highly trainable.) 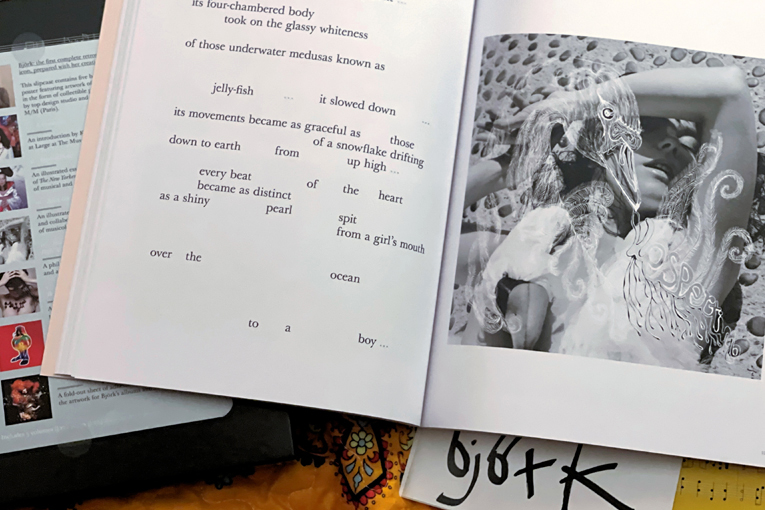 2011’s Biophilia—a compositionally curious, rhythmically challenging, and mathematically fascinating rumination on cosmology, biology, and physics—is jam-packed with tracks that will tell you all sorts of things about the transient response of a system and its imaging capabilities. I’ll put on “Crystalline” and close my eyes, and if I can point to either of my speakers with any sort of accuracy, something isn’t set up right or designed well . . . or both.

I could go on and on. The point is, of Björk Guðmundsdóttir’s first nine studio albums released to date (as I write this, we’re still days away from the release of her tenth), eight of them are filled to the brim with music that’s fantastic for separating the high-fidelity wheat from the mass-market audio chaff. I could use those eight albums exclusively as reference material for the rest of my career and not run out of things to say about them.

But not Vespertine, despite the fact that—as I said above—it’s not only probably my favorite, but also one of her most sonically satisfying works. So, how do you square that circle? How does such an amazing-sounding collection of songs completely fail me when it comes to saying anything meaningful about the objective performance of a speaker or amp or source device?

I think I’ve finally figured that out thanks to Björk’s incredible new podcast, Sonic Symbolism.

If you haven’t heard it yet, Sonic Symbolism is a new nine-part series in which Björk discusses her albums one at a time, alternating between freeform conversations with writer/philosopher Oddný Eir and more structured interviews with musicologist Ásmundur Jónsson. Textures, timbres, and emotional landscapes are at the heart of the discussions, and she also talks about the symbology of each album’s cover.

On the day the first three episodes dropped, I ripped through the first—which covers Debut—as if it were oxygen and I was drowning. But then I found myself unable to go any further for the weirdest of reasons. Björk’s next album, Post, sits right at the top of my list of albums I wish I could wipe from my memory and experience again for the first time. It’s not that I love it more than Debut. It’s just that it was the first album of hers that I purchased on Day One (two copies, in fact: a cassette for my car and a CD for home), so my first experience of listening to it is etched on my brain, and indelibly tied to that specific time in my life.

The weird thing is, I kinda got a do-over of sorts with Debut thanks to the podcast. As soon as that episode was done, I sat down to explore the album again, and found myself taking new avenues and pathways through it—of exactly the sort I’ve wanted for years with Post.

So when it came time to listen to the second episode, I found myself in stuck mode, wanting to wait until the time was right, until I was ready to dive into Post with a fresh set of ears and a new perspective. It took a couple of weeks, but one evening I reclined in my two-channel listening room and finally dug in.

And I didn’t get the reset I wanted. Maybe my emotions connected to the time in my life when I first fell in love with that record are too strong to be undone by any amount of philosophizing or new information. Or maybe I just wanted it too much. I don’t know. The good news is, that letdown freed me up to continue with Sonic Symbolism.

I’ll admit that I probably didn’t give Episode 3: “Homogenic” the time it deserves, because it was the fourth episode, on the subject of the aforementioned Vespertine, that I was drawn to like a moth to flame.

And the funny thing is, I wasn’t looking for any insights into the recording or production of the album—merely a peek inside Björk’s noggin, or at least her recollections of her memories of what state of mind she was in when she made this record.

But it was the stuff about the recording that resonated with me the most. Björk talks of acquiring her first laptop during the making of the record, and the newfound freedom that afforded her in collecting material herself—sort of a “found sound” project. In stark contrast with the huge, straightforward, Led Zeppelin-like sonic qualities of Homogenic, Björk describes the instruments of the next record as “things like insects, harps, glockenspiels, music box, picking with my fingers on the table—that would be the bass drum … and editing that like a scrillion times into some sort of jigsaw puzzle.”

All of this is adding up to explain why I find this album so sonically fascinating. But again, it does little to explain why I’ve just never found it all that informative as reference material. But when you start to put the pieces together, it all starts to make sense.

At one point, she says, “For me, Vespertine was switching to finding the soul or the spirituality in the laptop, or in the digital world. I mean, we’ve forgotten this now because the speakers on the laptops are so good, but back then they were horrible . . . And so, I wanted to do an album that would sound good in small speakers. The sounds that sound amazing when they’re digital are things like harps and plucky sounds, you know, and glockenspiel and music boxes. They sound very, very beautiful in this kind of compressed digital world.”

And there you have it. I’ve often said that Vespertine would sound good through two tin cans connected via string, and apparently I wasn’t far off from the original intent. 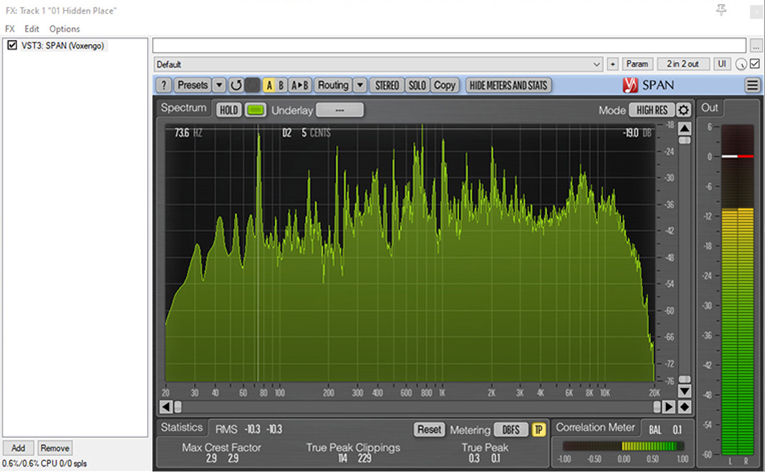 Armed with this insight, I couldn’t resist the urge to start digging into the mixing and mastering of the album a little more. Pulling the first cut, “Hidden Place,” into my DAW and looking at it with Voxengo SPAN (a spectrum analyzer I use in the production of the SoundStage! Audiophile Podcast), I was surprised to find that the fundamentals of the deep bass notes in the beat largely sit comfortably in the 70-to-100Hz range, and aren’t very high in the mix at that. In a sense, you could say the album’s bass is mostly an illusion created by harmonics and subharmonics. Don’t believe me? Cue up “Hidden Place” on your phone, skip to the chorus starting at around 0:53, and play the song through your smartphone’s speakers.

Hear that bass? Guess what? It’s not the piddly speakers in your phone making those deep beats sound so deep—it’s the combination of artful mixing and psychoacoustics.

The aforementioned “Hyperballad,” by contrast, features significant low frequencies down to nearly 30Hz that are nearly 15dB hotter than anything else in the mix. Which, unsurprisingly, explains why that track, plus big three-way towers with low impedance dips, plus amps with power supplies struggling to provide sufficient clean current, can result in a direct injection of DC that’ll fry a voice coil quicker than you can say “Eyjafjallajökull.” 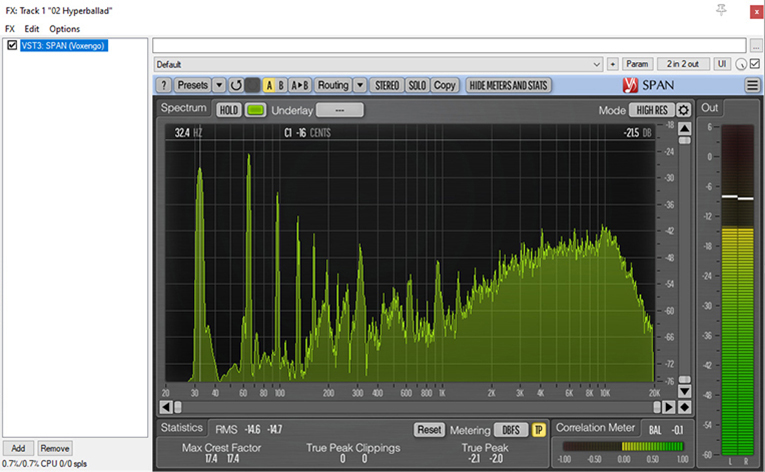 What’s the takeaway from all this?

The one thing I don’t want to imply in any of the above is that “Hyperballad” is a better-sounding song than “Hidden Place.” But I also want to counter the notion that a “good-sounding recording” is the same thing as “good reference material.” I’ve mentioned from time to time that I could spend a few minutes with the Allman Brothers Band’s “Blue Sky” from Eat a Peach and tell you everything I need to know about a sound system. And needless to say, that album isn’t the apex of audiophilia.

As always, one of my main goals here at SoundStage! Access is to provide shopping advice for beginners in this hobby. If that’s you, and you’re fortunate enough to have a hi-fi shop near you, the one thing I want you to take from my experience with Björk’s Sonic Symbolism and the revelations I’ve had about Vespertine boils down to this: when you’re auditioning gear, don’t just bring the best-sounding records in your collection as demo material.

Figure out which cuts sound better on some systems than others, and try to figure out why, as best you can. If you’ve ever been to an audio show, you can probably safely ignore 99% of the songs you heard in the demos there. A lot of that stuff is picked because it doesn’t reveal the flaws in a piece of gear, especially in the less-than-acoustically-ideal environments of a hotel room or convention space.

Go with what you know. But more importantly, go with the recordings that made you feel like you needed to upgrade your gear to begin with, if you can figure out why. I use Lyle Lovett’s “Old Friend” as a test track, not because it sounds gorgeous (it does), but because the little melismas scattered throughout the recording can sound a bit edgy and sharp through some gear, but not other gear.

I’ve mentioned Queen’s “Radio Ga Ga” as good reference material in the past, and received raised eyebrows as a result. It’s not an obvious pick, what with its Linn LM-1 Drum Computer beats and Roland JP-8 synths—not exactly the sort of instrumentation we think of when we think “high fidelity.” But that song and that mix will spotlight any egregious tonal inconsistencies in the 500Hz-to-5kHz range really quickly, adding shrillness or sibilance or throwing the entire mix off-kilter, whereas on a good system, it sounds quite nice. Not revelatory, but nice nonetheless.

The point is, the best-sounding recordings aren’t always the best reference material, and the best reference tracks aren’t always the best-sounding recordings. And that shouldn’t have an ounce of bearing on what you listen to for pleasure. Vespertine may sound brilliant through the Sonos speaker in my bathroom, but I still enjoy it much more when played through my reference stereo system.

I’ll just never reference it in the course of a review. Because the point of reference material is broad applicability. I can use “Radio Ga Ga” and “Blue Sky” and “Old Friend” as stress tests because I think they tell me something meaningful about what your experience with a piece of gear will be while listening to Wagner or Wilco or the soundtrack for John Wick. There are any number of scrumptious-sounding recordings that simply don’t.