Cut into many audio cables and you’ll probably find two wires twisted around one another. The so-called "twisted pair" looks simple enough, but it was one of the more profound inventions in the field of electricity. Generally credited to Alexander Graham Bell, the twisted pair made possible modern telephone communications by greatly reducing the ability of one electromagnetic field to interfere with another. 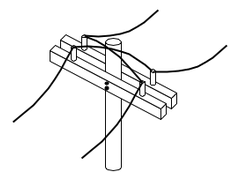 Telephone communications worked just fine until someone got the idea of stringing electric power cables alongside telephone lines. When that happened, telephone audio quality deteriorated. To fix the problem, electrical engineers came up with the idea of transposition: running a telephone cable on one side of a pole and then, a few poles down the line, moving the cable to the opposite side. This left/right transposition formed the first twisted pair, albeit with just six twists per mile of cable. The effect of this limited twisting was a notable increase in audio quality, but as more electrical lines carrying greater amounts of current were strung on utility poles, a more radical solution was required to overcome what was now understood to be electromagnetic interference (EMI) between communications and power cables.

In 1881, Bell discovered that greatly increasing the number of twists per given length of cable could reject far greater amounts of EMI than was possible with transposition. Experiments showed that noise was introduced by one cable into another through the coupling of electric and magnetic fields. When the source of the noise is farther away from a telephone (or audio) cable, the resulting interference can be effectively dealt with by an audio amplifier through a phenomenon known as common-mode rejection. However, if the source of the noise is close to the signal wire, the resultant interference becomes more than common-mode rejection can handle, and something else needs to be done to address the noise. Bell discovered that simply twisting the positive and negative signal wires repeatedly around each other greatly reduced noise and allowed closer proximity between electrical and telephone cables, without the former reducing the signal quality in the latter.

Twisting as a means of eliminating unwanted interference works well, but it’s not foolproof. A more effective means of protecting the audio signal from outside interference is to surround the twisted pair with a metal shield, in the form of a metal foil or a woven metal braid. Some cables, especially the coaxial types used in digital or television cables, employ both a foil and a braided shield to additionally reject the radio-frequency (RF) noise that surrounds us and penetrates just about everything that stands in its way -- except metal shielding. In a coaxial cable, the signal cable is at the center, surrounded by an electrical insulator, this in turn shielded with foil, then another insulator over that, then the braided shield, and finally the outer insulator. An insulated twisted pair might have a foil insulator wrapped around the individually insulated signal wires at the core of the cable, with an outer insulator covering the foil. Many shielded cables contain a drain wire, the purpose of which is to drain away EMI stopped by the shield so that it can’t build up and find its way into the audio signal.

Braided cables offer the noise-rejecting qualities of a twisted pair and some of the shielding capability of foils, but without the use of additional shielding. This makes for a more flexible cable and, according to companies that employ their own patented braids, such as Kimber Kable and Shunyata Research, braids sound better, too. They’re certainly more interesting to look at than a simple round strand of conventional cable. A variation on the braided theme is used by Analysis Plus, which weaves cable conductors into an oval shape around an insulating core. Analysis Plus displays measurements on its website showing that its hollow oval cables transmit a more accurate signal than conventional cable. That’s certainly been my experience, and it’s why my interconnects are APs.

How a cable has been assembled may not always be apparent to the eye, but it’s easy to see that real (read: not dangerously thin) speaker cables are always thicker than interconnects. A cynic might say that speaker cable is fatter so companies can charge more for it, but that’s not really the case. A speaker cable is thicker because it carries far more voltage and current than an interconnect, and, as I explained in the last installment of Audio 101, a thinner cable presents more resistance to current, which creates heat and causes distortion. Heat is not something anyone wants in any kind of electric cable, and distortion is the enemy of good sound.

To complete the explanation of why speaker cables must be thick, let’s look at the differences in output voltage between a source component and an amplifier. Most RCA (aka single-ended) outputs on a source component, such as my Ayre Acoustics QB-9 USB D/A converter, put out about 2.0V and mere milliamps of current. Contrast that with a power amplifier like the Simaudio Moon Evolution W-8, which has a maximum output of 50V and a colossal 64 amps of peak current -- four times more current than a standard 15 amp wall socket can supply. That’s why speaker cables are fatter than interconnects. But are speaker cables too fat for what’s asked of them?

Looking at Cardas Audio’s catalog of speaker cables, we see that the top of their line, the Clear Beyond, is a massive 5-gauge design. According to the American Wire Gauge (AWG) table, a 5-gauge conductor will handle up to 795 amps before fusing. To give that number a little bit of context, 795 amps is almost four 200-amp-service houses’ worth of current-carrying capacity. If a powerhouse amp like the Simaudio W-8 can manage "only" 64 amps of peak current, why would anyone make a speaker cable thick enough to withstand 12 times more? The marketing answer is that people will probably be more willing to pay more money for a thicker cable. But as we’ve seen, there’s a valid engineering reason why thicker conductors are needed in a speaker cable.

Comparing the resistance of a 5-gauge cable to a 12-gauge cable on the AWG table, we see that the thinner cable (remember, the higher the number, the thinner the cable) presents five times more resistance to electrons than the thicker one. Resistance is directly related to signal distortion; therefore, a thicker speaker cable, all else being equal, will present to the speakers a clearer signal than a thinner one. That this is the case is easily illustrated by comparing two different sizes of Analysis Plus speaker cable, the Oval 9 and Oval 12, which, save for the size of the conductors, are otherwise exactly the same cable. When I listened to them head to head, the larger cable definitely sounded quieter and more detailed, and offered deeper, more substantial bass and a more detailed soundstage.

Next month I’ll take a closer look at interconnects and discuss the differences between single-ended and balanced cables. I’ll also delve into the wild world of insulating materials for speaker cables and interconnects, because -- you guessed it -- insulators matter, too!