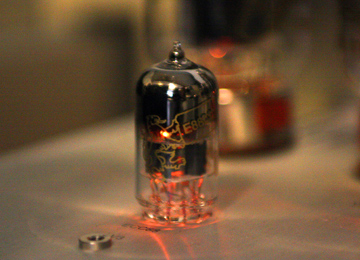 The early 20th century was remarkable for a variety of reasons. The field of physics was expanding, thanks to the discoveries of such scientists as Max Planck, Niels Bohr, Albert Einstein, and Pierre and Marie Curie. Traditional political systems were in a state of unrest as empires fell alongside barriers of social stratification, and existentialism began to germinate as the works of Dostoyevsky and Nietzsche spread. Powered flight came to be in North Carolina, while the Model T began rolling off production lines in Michigan. And with little of the recognition that it perhaps deserved, the Edison Effect found a home in a vacuum tube that illuminated far more potential than it did light: the triode.

The first vacuum tubes were used as rectifiers, converting alternating current (AC) into direct current (DC) for early radio transmitters and receivers. The triode introduced the world to electronic amplification, and various iterations of tube amplification found homes in long-range radios, then telephones, followed in the 1940s by the first computers. Like anything else, though, the vacuum tube was not timeless, and in the 1950s the transistor was born: a semiconductor that performed a role similar to that of the vacuum tube, but was smaller, cheaper, more reliable, and required less power. Since that time, transistors have become so extraordinarily small and efficient that my computer’s central processing unit houses 410 million of them on 107mm2, and they are part of almost every electronic device on the planet.

So when I sat down at 16 years of age to hear my first pair of high-end integrated amplifiers at a local dealer, I was surprised to learn that inside one of them were several small vacuum tubes. My vacuous younger self had no interest in discovering what made such a device stand apart from its competitors, but it wound up not mattering. Whereas the first integrated amplifier proved to be infectiously smile-inducing, with its expansive soundstage and impeccably clean sound, it took all of 30 seconds for me to hear that the second amp, with its protruding and dimly lit light bulbs, was making a hot mess of Moby’s Everything Is Wrong. This, I remember thinking, is not only a sound I dislike, it is a sound that is wrong. The soundstage was slightly closed in, voices were embellished, and the entire character of the sound was overrun by an inescapable warmth that deprived the album of the very thing my angst-ridden teen self loved about it: its melancholy. It’s perhaps no surprise that the first integrated amp I heard that day, Krell’s KAV-300il, would find its way into my system nine years later, when I could actually afford it -- third-hand, for less than half its original cost.

No matter. From the moment I "heard" my first vacuum tube, I had an intense aversion to those little guys that has yet to subside. The curious thing to me is why they find their way into audio products to begin with. Not only is the tube a roughly 100-year-old technology that has serious limitations in terms of power output and life span, it has a shortcoming far more insidious, but that is welcomed by buyers everywhere: It introduces listeners to audible distortion. That warmth, weight, and vivacity that tube lovers seem to so fancy are actually distortions. Why would anyone want to hear them?

At the outset, I can appreciate that there are those who want to hear their music with a little more liveliness. Some early recordings on Compact Disc were painful to bear, and I’ve read that early high-power solid-state amplifiers were equally tough on the ears. But in 2012, why is it that, like LPs, tubes are still around? There are better ways of amplifying a signal than with vacuum tubes, and makers of solid-state gear are getting better at coaxing more musicality from their designs.

Musical Fidelity is illustrative of this. They were once keen on using tubes in a number of their integrated amplifiers, as well as in some of their digital-to-analog converters of yore. But the interior architecture of their products has evolved to the point where tubes are no longer needed to achieve the British company’s signature sound, which errs on the cozy side of neutral while aiming for excellent measured performance. Their M6 500i integrated amplifier is a 500Wpc monster that has kept me company for the past few months, and unlike some of its noteworthy forebears, such as the Tri-Vista 300 and Nu-Vista M3 integrateds, it contains no military-spec tubes.

It’s a little odd to hear such a high-powered design handle delicate music with not only precision but grace. It sounds warm and inviting, but not overly so, and betters my decade-old Krell in every possible sonic parameter. For $7000, that’s the least the heavy, aluminum M6 500i can be expected to do; for that money, one could assemble a very capable system’s worth of equipment from the models we’ve reviewed here on GoodSound! But the Musical Fidelity joins such components as Simaudio’s Moon Evolution 650D DAC-transport in being one of the results of a forward-thinking, paradigm-shifting approach to high-end audio, one that’s not only rich in features and has superb technical performance, but does so in a way that is thoroughly musical and organic in nature.

And this last part should do well to capture listeners who are stubbornly trapped in the Precambrian era of audiophilia: those who rely on tubed preamplifiers and amplifiers, and record players spinning LPs. Many of these folks think that digital music just can’t recapture that analog texture and ease. However, the future seems to bode well, for those in search of the highest resolution, and for those looking for the highest resolution without sacrificing the soul of their music. As things currently stand, achieving both aims in a single product looks to cost quite a bit of money. But it’s only a matter of time before this technology and know-how trickle down into ever more affordable products. I look forward to hearing the result, and to telling you all about it. And being able to afford it . . .