Roon: Do You Need a Dedicated, Audiophile-Grade Music Server?

I jumped on the computer-audio bandwagon early and eagerly. I pivoted from a bush-league, big-box-store-bought Sony carousel CD player to a Benchmark Media Systems DAC1 USB -- the first Benchmark DAC with a USB input. Besides, after four years of college in the mid-2000s, I was listening far more to iTunes than to CDs. Back then, Apple’s iTunes was a passable front end, if only due to the lack of competition. Now, though, there are innumerable alternatives, on both the hardware and software fronts.

So despite my keen interest in computer audio, and my having written many reviews in the past half-decade, my digital front end has more or less stood still. My 2009 MacBook Pro dutifully works as my music server, and as little else. I still use my iTunes library almost daily, despite having fallen pretty hard for Tidal HiFi’s CD-quality streaming service in summer 2015. Admittedly, interaction with the two software platforms is a bit clumsy -- I use my 2009 MacBook Pro with my stereo system, and do all my writing on a 2013 MacBook Pro. I use an iPad to control the server’s iTunes library, and just get up off my couch to manually manage Tidal -- hardly an elegant solution. There are countless dedicated, audiophile-grade music servers out there, but none with iTunes’ polished control interface or feel of bulletproof reliability. And if I got a dedicated server, I’d be paying for an expensive computer that could perform only music-related tasks, and do nothing else that computers normally do. I didn’t see the appeal. 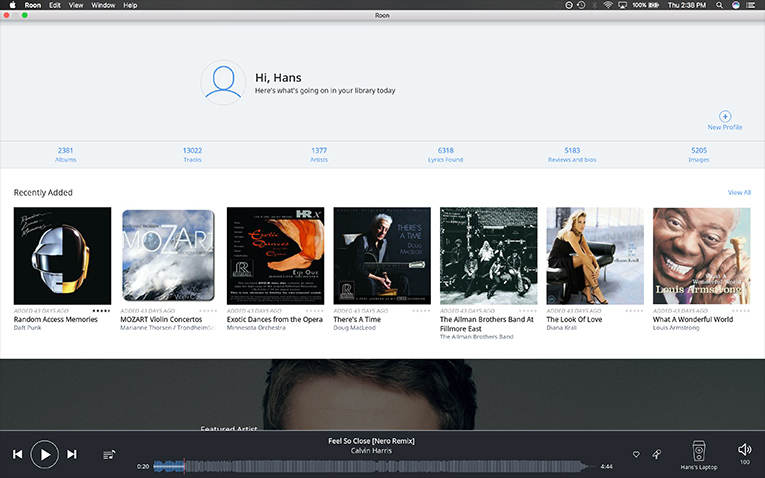 When Roon Labs’ music software debuted in 2015, I heard a lot about it. The brainchild of ex-Sooloos, ex-Meridian software engineers, it promised to be not only a talented new musical interface, but the definitive software front end. It costs $119 USD per year, or $499 for a lifetime license. I wanted to try it, but my basically frugal, skeptical nature got the better of me. Then I was given a free Roon license. So I didn’t have to part with $499 for the pleasure of discovering whether or not Roon is any good.

And here’s the thing: Roon is really good. In fact, I haven’t used iTunes since installing Roon.

I installed a Roon “core” on my dedicated music server. The core serves as a hub that aggregates all of the music on my network. After I’d directed the core to my iTunes folder and high-resolution files, it asked for my Tidal credentials. That was it. From there, I downloaded apps for my “client” devices: my iPhone (an Android app is also available), iPad, and 2013 MacBook Pro. (There are also dedicated Roon apps for Windows clients.) I was immediately able to access my local as well as my Tidal content from each device. And provided I set my server to never go to sleep (its display turns off after three hours of inactivity), opening the app on any of my three Wi-Fi-connected client devices gave me full and immediate access to Roon. So far, so good. 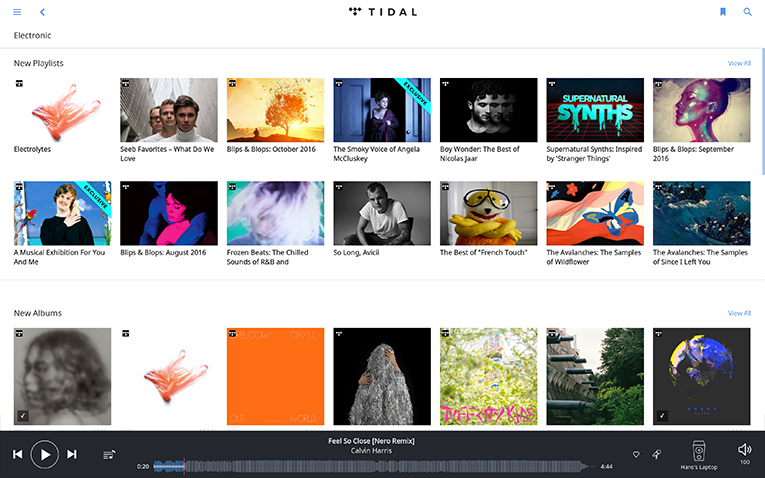 Roon’s trump card isn’t that it works -- there’s plenty of reliable music-server software out there -- but in how it presents content and playback information. Most significant is Roon’s deep integration with Tidal. Local content and Tidal content can appear side by side, the Tidal files identified with a tiny Tidal logo in the upper-left-hand corner of the song’s, album’s, or playlist’s cover art.

Cover art? It’s everywhere. During the setup process, Roon combs the Internet for cover art for every song and album in your local collection. Ditto for lyrics, though in my experience that was a sketchier affair. For albums I’d ripped directly from CDs, lyrics were almost always present, but usually not for singles I’d “borrowed” via the Internet. Also neatly built in is information specific to the album and artist. Click on an album and you’re presented with its release date, a short review, and the date you added it to your collection.

Lots of information about playback is also available. A small glowing dot can be expanded to show the entire signal path for the song playing, including: the source, file type, sampling rate, bit rate, number of channels in the recording, the server interface (Roon), and the output -- in my case, the Mac OS’s built-in mixer. You can also simultaneously send an audio signal to multiple zones. In fact, you can simultaneously output multiple independent audio signals to different zones. I can play my horrendous electronic music on my stereo while my better half listens to the original-cast recording of the hugely popular musical Hamilton from my newer laptop; I can control my stream from my iPad, and she can control hers from my iPhone. Sweet.

There’s a lot more Roon functionality that I don’t even mention here. Roon offers a 14-day free trial -- curious minds can explore everything they offer without spending a penny. 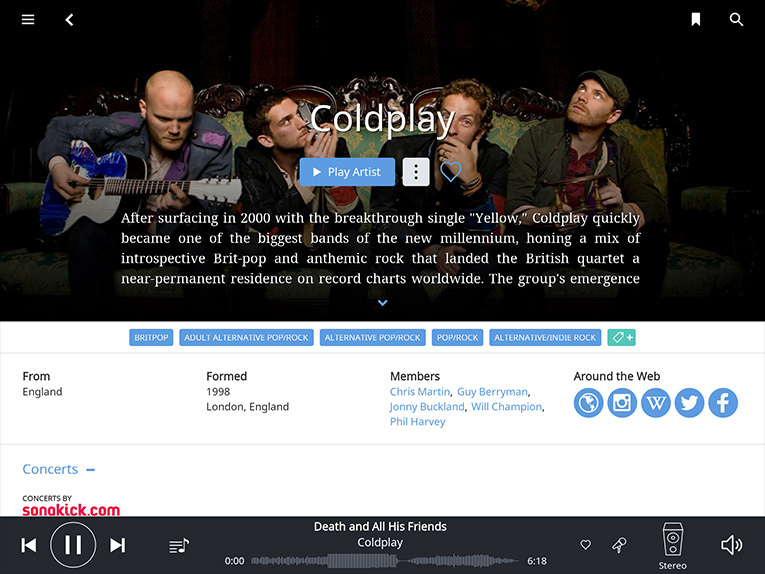 Drawbacks? I found it a challenge to integrate local with streamed content, and while Roon does a largely excellent job of it, it’s not perfect. For example, when I search for “Coldplay,” a band whose music I love and most of which I own -- legally -- Roon first displays my content, then Tidal’s. However, Roon assumes that each of the albums referenced on my local music server is complete, regardless of whether I own the entire album or only one track from it. Accordingly, Roon then refrains from displaying that album in the Tidal section of the Coldplay page, leaving me to search for a specific album or song. This is also a problem when my server contains a complete album in a lossy format and I want to listen to Tidal’s lossless version. There’s no neat answer. The Roon folks could have chosen to be over-inclusive in what Roon displays, but that would quickly grow cumbersome and repetitive. Also, Tidal content occasionally didn’t appear on my Roon iPhone or iPad app. Closing and reopening the app solved that.

After a month of using Roon daily, those are my only complaints. Roon worked flawlessly with both my music server, where I’d installed the core, and my newer laptop, from which I frequently streamed music. There were no skips, no lulls, no odd behavior, no problems with connectivity. It’s already become second nature to me to use Roon instead of Tidal’s native apps. No, my stereo doesn’t necessarily sound any better than it did before, but my interaction with my music is now significantly more streamlined. The seconds, minutes, and hours of wasted time and energy it will save me going forward, as both a reviewer and a listener, are substantial. Multiply that by the number of potential users and music end points in a household, and I suspect that the initial investment in Roon will look a lot more palatable for many audiophiles and power users.

Roon’s most attractive feature is that it involves no proprietary hardware. If, like me, you don’t like the idea of a dedicated audiophile-quality music server, then just about any computer made in the last five years will do nicely. If you want to be bougie and invest in a fancy new streamer, then Roon may have you covered there, too -- many popular hi-fi companies are building Roon Ready streamers that Roon will instantly find on your network with no extra effort on your part. Either way, Roon appears to be the real deal: a slick, rich, reliable music interface that is, above all, intuitive to use. As more listeners switch to streaming music, there will be increasing demand for software of this caliber to make that transition as painless as possible. Roon may not have cost me anything, but I’m definitely a convert.