At least once a week, I’m asked by a reader to recommend an electronic component, a cable, a loudspeaker -- or all three at once. Being asked such questions is gratifying; it tells me that people are reading my reviews and take my assessments seriously enough to want my advice. But while that advice is freely given, it isn’t something I dispense without serious consideration.

I’ve taken a lot of time to assemble my own system, not least because new review products come along and cause me to defer any purchase a bit longer by giving me more choices. That was the case with my search for a reference loudspeaker, which took me about two years to complete. Part of the problem I faced was an embarrassment of riches: there are so many great speakers being made today that it seemed an impossible task to choose just one.

When choosing a new component for my system, I do as most readers do: ask others for advice, scan the market for what’s available, and, ultimately, rely on my own counsel. In the last, I’m fortunate in having already reviewed a lot of the products. In addition to those things, I factor in the company’s reputation, and the expertise of the people who designed and made the product.

Certain industries attract romantic dreamers -- airlines and car manufactures come to mind -- who have more capital than business sense. Audio is no exception. Dozens of companies have come and gone in less time than the average product cycle at such stalwart firms as Bryston, Paradigm, and McIntosh. Keeping that in mind, I tend to shy away from companies whose product lines have little or no depth, that are very new, or that seem to be selling their products at prices that can lead only to financial ruin. After all, bankrupt companies don’t honor warranties -- and they make selling their gear in the used market that much more difficult.

The first reference component I bought was a Simaudio Moon i5.3 integrated amplifier. I purchased the Moon early in my reviewing career, before I’d heard many of its competitors. But today, several years later, I’ve yet to hear another integrated amp in my price range to make me regret that decision. So while it was a decision made somewhat in the dark, it has turned out to be a good one.

While there are many dreamers in the component and speaker businesses, cable manufacturing is full of them. Because it seems that anyone with a soldering iron can get into the cable business, I stick with companies that employ physics and electrical-engineering knowhow to design their products. Can’t-go-wrong companies include Analysis Plus, Crystal Cable, Supra Cable, and Synergistic Research. One thing shared by all five of these manufacturers is that they don’t employ hyperbole in their marketing -- in fact, some do a pretty lousy job of selling themselves. Another commonality is that each of these companies has contributed to one of my systems: Crystal Cable Piccolo interconnects and speaker cable, and Synergistic Research Tesla Tricon USB and T2 and T3 power cables in my main system; Supra Cable speaker cables and power cords in my home theater; and Analysis Plus in my secondary system. 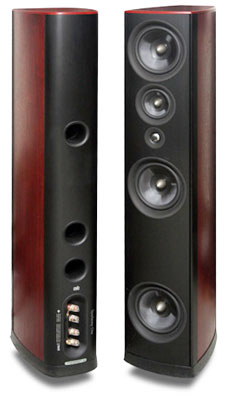 When it came to loudspeakers, I had a list of upper-end and midline products that made it into the playoffs. The most expensive speaker I considered was Paradigm’s Reference Signature S8 v.3 ($6998 USD; all speaker prices per pair), a stunning achievement in sound and appearance that would please even the most tinny ear. Unfortunately, they proved almost twice as expensive as other high-end contenders, and so were eliminated by financial reality. That left in the running PSB’s Synchrony One (shown left, $5000) and Imagine T ($2000), Paradigm’s Studio 60 ($1998), and Focus Audio’s Classic FC9 ($1800) and Signature FS8 ($2990). Of those, I best liked the FC9’s sound, but though the speaker is finished to a very high standard, I don’t much like the colors it comes in. Petty, perhaps, but I do have to look at the things.

Each of the remaining speakers had a strike against it: I loved the PSB Synchrony One’s bass and mids, but am no fan of its tweeter; the Imagine T’s tweeter I like, but the finish is a lot like the Focus FC9’s. The Focus FS8 is terrific on most fronts, but I wish it had the FC9’s tweeter setup. The Paradigm Studio 60 is also excellent, but I thought I wouldn’t be able to listen to it without pining for the S8. So with speaker selection going nowhere fast, I decided to stop trying to pick one. That worked wonders -- within a week, I’d rediscovered a speaker that had escaped my list.

What I realized was that while I’d heard a lot of terrific speakers over the last couple of years, only two had stood out as having significant "wow" factor. Interestingly, neither was a speaker I’d reviewed, but both were present in publisher Doug Schneider’s listening room. I always know when Doug’s on to something special -- he asks me to come over and listen to some unspecified component. Twice he’s actually blacked out the room to prevent visual bias, and to surprise me all the more. One of those blackouts involved perhaps the best-sounding little speaker ever, the Dynaudio Excite X12 ($1200). A great speaker it indeed is, but it was way too small for my needs. The other was the Definitive Technology Mythos STS (shown right, $2998).

The Mythos STS had already been reviewed by our Roger Kanno, and Doug had it in for measurements. When I got the call to come over and hear something "really good," I made a beeline for Doug’s listening room. What I heard was a beautiful, clean midrange, sparking and refined highs, and deep, tight, powerful bass. Was I surprised when the lights came up and I was staring at a "lifestyle" speaker! I soon learned that one of speakerdom’s top engineers had designed the Mythos line, and was most interested to hear that one of the world’s greatest-ever speaker designers had looked over the STS and pronounced himself impressed.

Then, amazingly, I forgot all about the Mythos STS -- I’m not sure why. But later, in a real "Well, duh!" moment, it came back to me, and it was the obvious choice to fulfill my needs. After consulting with Roger, who felt that the larger Mythos ST ($3998) would better suit my big listening room, I went out and bought a pair. At long last I have a reference loudspeaker, and I love it.

So ends one journey, at least for the moment. Now all I need is a D/A converter to complete my system -- but with USB 3.0 coming out, I think that decision, too, might end up being long deferred. Who knows what its high data rate might do for sound? In the meantime, maybe a more powerful integrated amp would be a nice idea . . .