Jason and the Scorchers: "Halcyon Times" 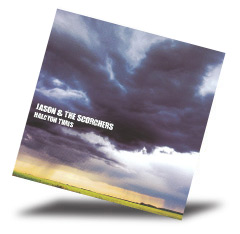 A band called Jason and the Scorchers should have energy to burn, and it’s been a while since I’ve heard a longish CD (14 cuts) that never lets up, wallows, or runs out of steam. The country punk-rock band has been around, but Halcyon Times is their first album since 1996. It presents band founders Jason Ringenberg and Warner E. Hodges in the company of a new, energetic rhythm section consisting of bassist Al Collins and the young Swedish drummer Pontus Snibb. The recordings were done live with a studio audience, which might account for some of the infectious spontaneity. The songs are about people, events, and Americana that the band has experienced and then written as bigger than life. Consider this character from the opening of “Moonshine Guy / Releasing Celtic Prisoners”:

And he yells and he roars
Likes the Stones, hates the Doors
Thinks the Beatles sing for girls
He’s a moonshine guy in a six-pack world

The recording is sometimes refined but often deliberately coarse. When the band is really humping, it sets up an appealing and powerfully raucous sound. There’s a short, homemade documentary on their website that shows how a lot of the album was recorded, and it looks like it was as much fun to make as it is to listen to.