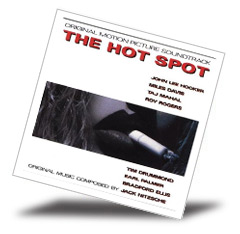 In 1990 Dennis Hopper directed The Hot Spot, which starred Don Johnson and Virginia Madsen. It was a good stab at noir in color, but critics were unimpressed. Hopper asked Jack Nitzsche to write the music, and Nitzsche decided that the best way to accompany the images on screen was to use the blues. To play those blues he secured the artistry of John Lee Hooker, Miles Davis, Taj Mahal, Roy Rogers, Tim Drummond, Earl Palmer, and Bradford Ellis. He basically asked them to improvise on riffs, and since they aren’t just any musicians, their noodling produced some awesome results. Many of the tracks sound alike, but things really move on the vamp-like “Bank Robbery,” which lets Davis shine with muted trumpet licks intoned above a persistent rhythmic figure. The overall result is sultry and hot, and it’s exactly what the film needed.

The recorded sound is excellent and definitely audiophile quality. The moaning of Hooker’s vocals; the smooth sound of Rogers’s slide guitar; and the sassy, pointed attacks from Davis are all exposed with wonderful clarity. The CD layer is fine, but the SACD tracks seem to add a little air around the players, resulting in greater presence. Both sets of tracks are stereo; there’s no effort to synthesize any surround. For this recording, I think that was a good idea.