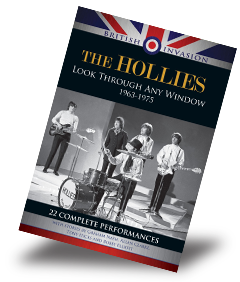 Look Through Any Window 1963-1975 gave me a chance to reassess a group I’ve always liked but, it turns out, didn’t really know. The Hollies had a good ear for songs to cover before they wrote their own series of great songs in the 1960s and sang them in beautiful harmonies. Allan Clarke and Graham Nash blended their voices in the manner of two of their heroes, the Everly Brothers, but when guitarist Tony Hicks added his voice, the group soared. After watching the DVD, I realized that the Hollies were also very strong instrumentalists, especially Hicks, who wove his complex guitar parts into the fabric of the songs. This documentary follows the group’s history, musical development, and changes, and includes some revealing footage of the band as it records "On a Carousel" in Abbey Road Studios in 1967. Nash, Clarke, Hicks, and Bobby Elliott tell their stories engagingly, and along the way there are performances from throughout their career, including some pioneering music videos. The sound quality varies -- some of the TV footage goes back to 1963 -- but none of the recordings is unlistenable, and some are quite good. The DVD gives you the option to watch all the performances without the interviews, and the accompanying booklet contains informative notes by Ben Fong-Torres. This DVD is a worthy addition to Reelin’ in the Years’ excellent DVD series on the British Invasion.