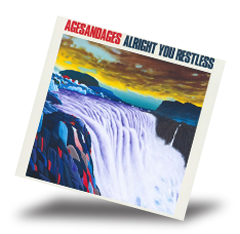 All right, are you restless for something new? My suggestions for this round of "Select Sounds" should help you usher in the warmer months and keep you on your toes (dancing with delight, of course). Alright You Restless (CD, KNF 1105), the debut album from Portland’s AgesandAges, brings a welcome exuberance to the current alternative scene with their proliferation of jubilant vocal harmonies, background hand-clapping, and all-around musical gaiety. A thorough listen to this disc and you’ll feel the clouds lift; the dreary days are gone and it’s high time for a sing-along! The opener "No Nostalgia" sets the bar high for the fun that follows. "Tap on Your Windowpane" is delivered with almost theatrical extravagance, but it’s all in feel-good fun. The seven members of AgesandAges collaborate like a fine-tuned commune in which each individual brings his or her best to the mix for the good of the group. Acoustic guitar, sweeping strings, and tinkling piano are matched with a gleeful vocal troupe fit to rival the heartiest of revival choirs. But that’s not to suggest that the whole album is sickeningly sunny -- some moodier numbers are scattered throughout, but in general this band has no time for negativity. As for the naysayers, as one song asserts, "they’re just angry and wrong" and "[we’re] writing our own story." Sing it loud and sing it proud, happy people! 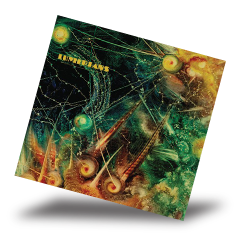 Perhaps this all seems a little too "Kumbaya" for you? For those more inclined to the dark and dimensional, take a stab at Transmalinnia by Lumerians (CD, KFR 1104), where amplified effects, tripped-out riffs, and a spiraling galaxy of kaleidoscopic rock will surely soothe your twisted mind. Both AgesandAges and Lumerians are represented by the Brooklyn-based label Knitting Factory Records, but that’s where their similarities end. Journeying through the underbelly of experimental trance, Lumerians attempt to open some doors of the mind. Quite melodious beneath the beastly, heavy facade, this is, according to the band’s biography "the noise of the billions of switches in your brain shutting off and on in perfect harmony." The disc was recorded in a former church in Oakland, California, an appropriate acoustic setting for the echoing resonance of the band’s hollow vocals, fused-out guitars, and bass-heavy percussion. This band is heavy enough to appease the old-school rock’n’rollers (there’s a trace of Black Sabbath and definitely early Rolling Stones appeal), and while they identify their sound as trance-like, it’s not the never-ending epic space jam some may be familiar with. These songs all come in under the six-minute mark, and they pack a wallop. If you enjoy experimental, original, sensory-pleasing sounds, Transmalinnia is well worth the trip. 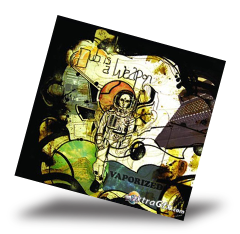 For reggae lovers, let your cares be Vaporized, the newest release by the five-piece New York outfit Dub Is a Weapon (CD, HAR 038), who recreate studio-style dub grooves with live and direct takes rather than relying on heavy post-production overdubbing and tweaking. Dave Hahn, lead guitar, weaves electrified grooves (and occasionally vocals) over his band mates’ island-infused roots rhythms. The result is hypnotic dub-style reggae at its purest level. "Persistence" and "Seven Doors" are upbeat, high-stepping numbers that rally the body into motion, while the Afro-polyrhythmic piece "Turbulence" layers complex beats with a full brass section for an authentic Ethiopian flavor. 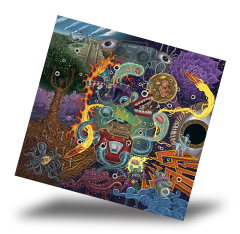 Finally, if you’re serious about craving something completely different, don’t miss the double album Electric Moroccoland / So Below by Club d’Elf, a global mix of musicians and DJs who share a passion for Moroccan trance music. Sub-Saharan Africa meets America with instruments such as lute, oud, and camel-skin bass meshing mesmerizingly with piano, Mellotron, turntables, and saxophone. Over 20 master musicians from both continents joined together for this experiment, including John Medeski, DJ Logic, Mike Rivard, Hassan Hakmoun, and Dolsi-naa Abubakari Lunna, creating a powerhouse of skilled musicians who were given the freedom to get creative on this exploratory Face Pelt Records double disc. Naming a fascination with 12/8 rhythms and Terence McKenna, the king of hallucinogen-induced mind expansion, as sources of inspiration, Club d’Elf makes music that’s all kinds of "out there," but it’s also extremely complex and it attempts something I doubt has ever been imagined, much less achieved. Here it becomes fully realized, and with truly enchanting results. Are you ready yet to join the Elf Club? By the end of So Below, I bet you will be.