In 2016, producer Dan Auerbach of the Black Keys gave the Pretenders’ Alone a good dose of the original group’s energy, and it turned out to be the Pretenders’ strongest album in a long time. Hate for Sale, their newest, features their touring lineup of guitarist James Walbourne, bassist Nick Wilkinson, original drummer Martin Chambers, and original lead singer Chrissie Hynde on guitar and harmonica. The result is even stronger than Alone, with a cohesive group identity. Producer Stephen Street (Blur, Cranberrys, Smiths) lets loud guitars rule, but also points up other talents of this band.

The title track begins with a false start that breaks down into feedback, then jumps into distorted guitar riffs, hard-hitting drums, and Hynde’s impassioned, angry vocal. You could be forgiven for thinking it’s 1985, and that the band is picking up where they left off after their third album, Learning to Crawl (1984). Walbourne fires off a brief, gritty solo that matches the fire of the Pretenders’ original guitarist, the late James Honeyman-Scott (1957-1982) -- or of Robbie McIntosh, who took Honeyman-Scott’s place on Learning to Crawl.

“The Buzz” has the ringing guitars of such early Pretenders songs as “Kid,” Wilkinson’s heavy but fluid bass line working its way around Walbourne’s arpeggios to keep the music briskly moving. The song reminds longtime fans like me of this band’s uncanny ability to sound elegant and tuneful while rocking hard. 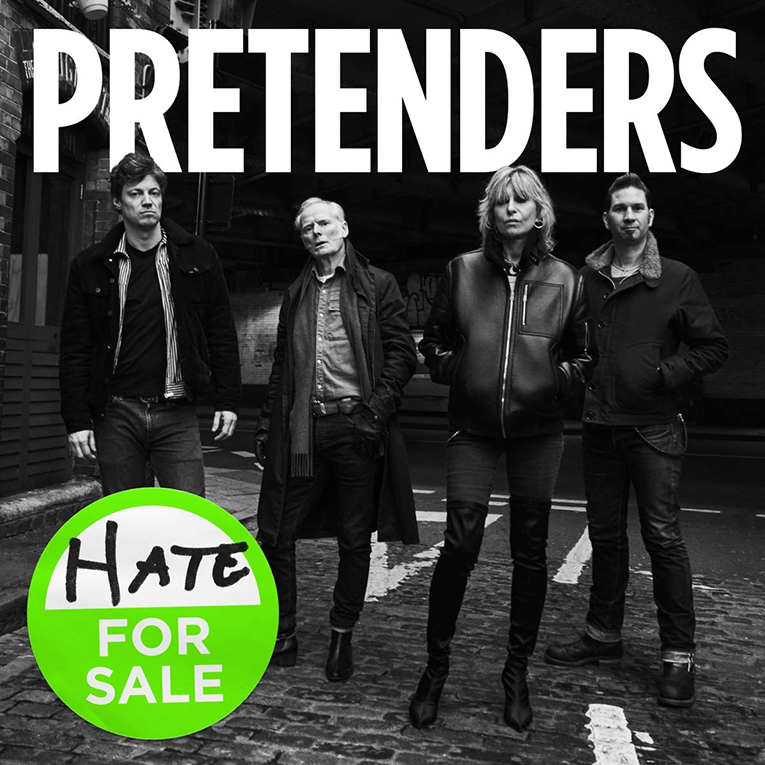 They dig into dub and reggae in “Lightning Man,” Walbourne’s slashing guitar giving it a cool edge, especially when he plays stinging riffs against Hynde’s harmonica lines. “Didn’t Want to Be This Lonely” builds on a Bo Diddley beat in ways similar to “Cuban Slide,” from the EP Extended Play (1981), but the song stands on its own, and includes a bracing rockabilly guitar solo.

Two ballads reveal the Pretenders’ sensitive side without slowing the album’s momentum. “You Can’t Hurt a Fool” has the feel of a 1970s soul ballad, thanks to Hynde’s guitar chords and Wilkinson’s melodic bass line. “Crying in Public” closes the album on a quiet note, with moving singing from Hynde and an understated but effective string arrangement by violist John Metcalfe.

Those two tracks aside, Hate for Sale rocks with a conviction and a power that make it a welcome return to form. “Turf Accountant Daddy” is all distorted guitar chords and thumping bass line, Martin Chambers wailing away on his drums as if he hasn’t aged a day since the recording of Pretenders (1980). The guitars in “I Don’t Know When to Stop” have the same dirty edge, but this track has its own melodic energy and rhythmic drive.

Hynde’s voice is strong throughout, biting and harsh in “Junkie Walk” and “Hate for Sale,” nuanced and caressing in the ballads. She’s also an ace rhythm guitarist, her playing affirming just how crucial it has been to so many Pretenders recordings, and how undervalued. She and Walbourne wrote all ten songs on Hate for Sale; his writing shows a respect for Pretenders history that doesn’t damp his fresh voice. 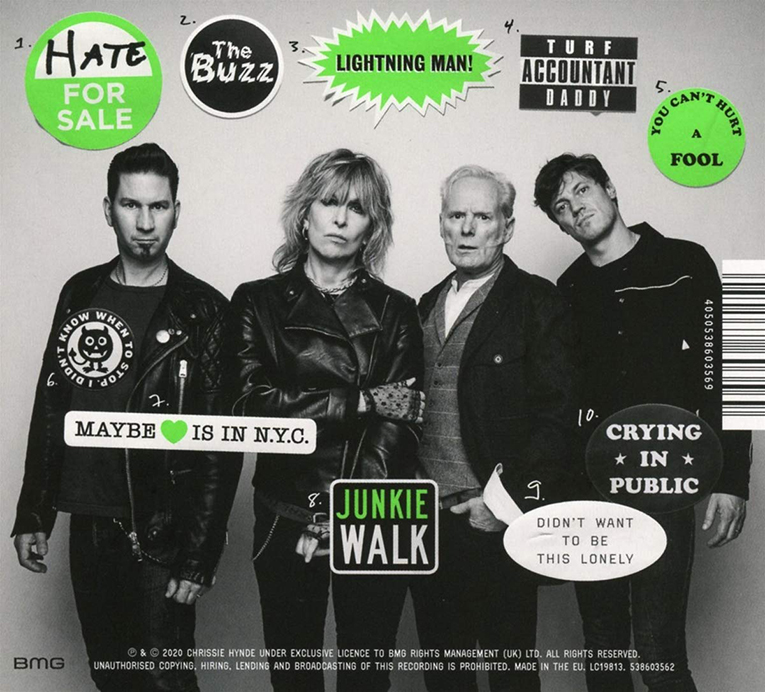 Chambers plays with vitality and finesse throughout, Wilkinson working with him to give many of these songs their intensity. Walbourne and Wilkinson were both on board for Break Up the Concrete (2008), which Chambers sat out. That album was a respectable outing, but lacked evidence of the band’s old anarchic kick, which is heard throughout Hate for Sale. Chambers sounds inspired -- I can’t help thinking he’s the main reason this album sounds like the Pretenders I most fondly remember.

Stephen Street has given Hate for Sale an aggressive mix appropriate for a loud rock’n’roll record. Though I found myself turning down the volume a bit, I was surprised by how much instrumental detail was presented. Hynde’s voice is well focused at the front of the mix, and the bass has plenty of slam without being pushed too hard.

The Pretenders are one of rock’s greatest, most important bands, but so many of their albums since Learning to Crawl have been Hynde backed by yet another group of players. Hate for Sale is the Pretenders working as a band -- a great one. It’s good to once again hear and feel their visceral impact.