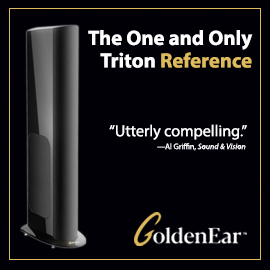 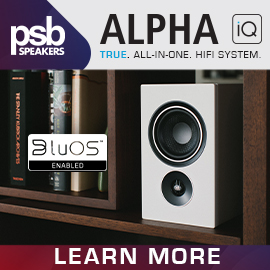 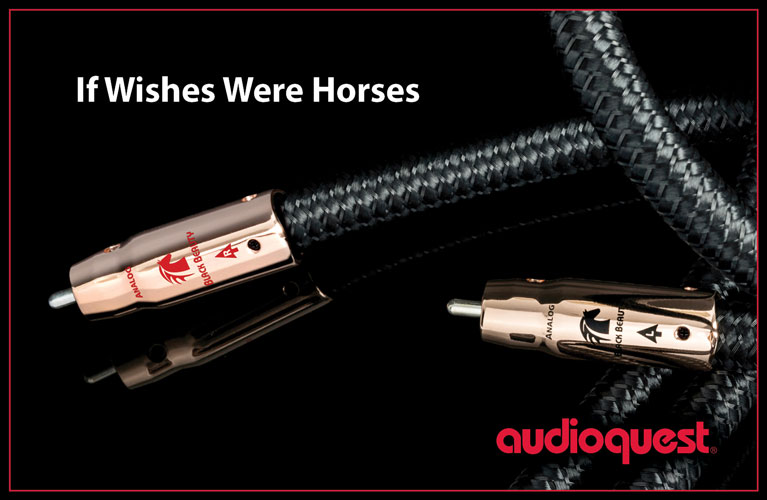 Focal was founded by Jacques Mahul more than 40 years ago, in Saint-Etienne, France. The company began as an original-equipment manufacturer (OEM) of speaker drivers for other companies while also making their own finished loudspeakers, sold under their JMlab brand, named for Mahul. The company’s full name is still Focal-JMlab, but since 2002 its products have been named simply Focal. 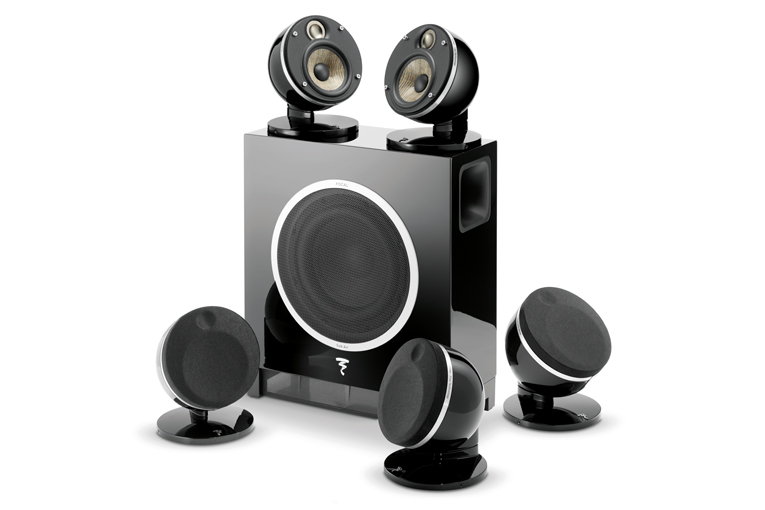 The Dôme Flax came to me as part of a prepackaged home-theater system, the Dôme Flax Pack 5.1.2, which comprises five Dôme Flaxes, a Sub Air subwoofer, and a pair of ceiling-mounted 300 ICW 4 speakers for Dolby Atmos height-channel duties. The package cost is $4290 USD. I wondered if this small system could live up to the Focal name.

The five main speakers of the Focal Dôme Flax Pack are identical: each Dôme Flax is a half-sphere -- a dome -- with two drivers on its flat front baffle. The half-sphere aluminum body comes finished in high-gloss black or white; on the rim of the dome is a thin silver ring, and the baffle is matte black or white, and covered with a fabric grille that twists off to reveal the drivers. The Dôme Flax measures 5.88”W x 6.75”H x 5.63”D and weighs 4.2 pounds.

The Dôme comes in two versions: the cheaper Dôme has a 4” woofer with a polyglass cone, while the Dôme Flax has a 4” cone of, well, flax. Focal first used their composite flax cones in their Aria models -- they comprise a layer of flax fiber sandwiched between layers of glass fiber. Since flax fibers are hollow, cones made of flax have a higher ratio of stiffness to mass than do cones of conventional materials such as polyglass, which means that, all else being equal, they can move more quickly in response to signals, with resultant lower distortion -- in short, Focal claims, better sound. 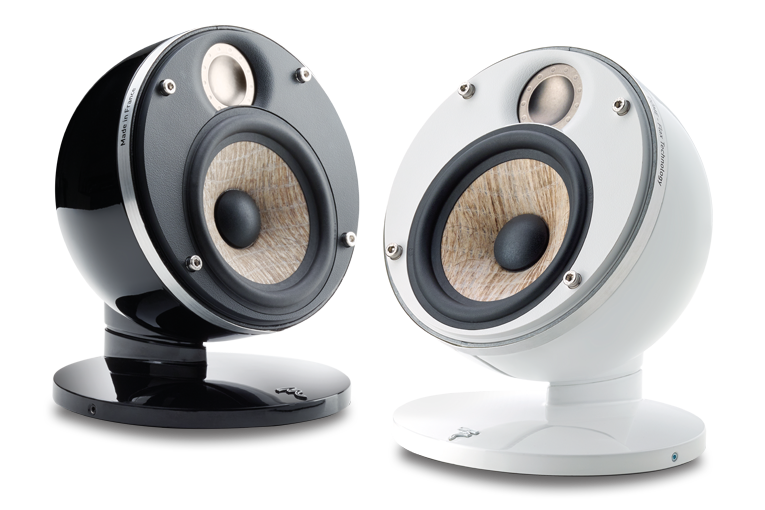 Not only is the woofer unique -- the tweeter design is rare at this price (bought separately, the Dôme Flax costs $690 each). In such a small speaker, you’d normally see a 1/2”- or 3/4”-diameter dome tweeter, but the Dôme’s tweeter measures 1” and is concave -- it’s an inverted dome of aluminum-magnesium alloy. Per Focal, magnesium provides excellent damping, whereas aluminum is highly rigid; the combination results in an extended high frequency response to 28kHz, -3dB. Woofer and tweeter are crossed over to each other at 2500Hz. The Dôme Flax’s specifications include a frequency response of 80Hz-28kHz, ±3dB, a nominal impedance of 8 ohms, and a sensitivity of 88dB/W/m -- all of which indicates that any decent audio/video receiver should find these speakers easy to drive.

The Dôme Flax is designed to be mounted on a stand, on a wall, or on a piece of furniture, such as a bookcase or shelf. The speaker’s own little integral foot and stand allow its baffle to be swiveled to any point within a range of 0-90°. The speaker’s base can be fitted with a rubber-like cover to protect the surface it’s placed on. Removing that cover reveals the speaker connectors -- no conventional five-way binding posts, but holes into which you insert bare wire, which you then tighten down with the provided Allen wrench. (At first I couldn’t find the Allen key, but there it was, embedded in the rubber cover.) The holes can accept wires of up to 12 gauge, but that would be a bit snug -- I found 14-gauge wire with a flat profile ideal. After I’d tightened down the cables, I couldn’t complain -- the fit was very secure.

To mount a Dôme Flax on a wall, first affix its provided bracket to the wall, then remove the speaker’s base cover, fit the base over the bracket, and the speaker clicks into place; secure speaker to bracket with two screws on the front/top of the base. 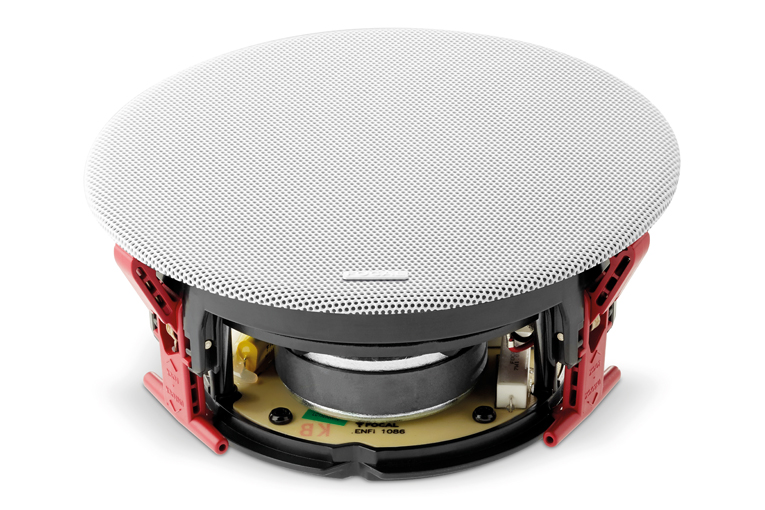 Each of the two 300 ICW 4 in-ceiling height speakers ($490 each when bought separately) included with my review system has the same drivers as the Dôme Flax. Rather than the coaxially mounted tweeter and midrange-woofer often seen in in-ceiling speakers, here the tweeter is mounted above the woofer, as in the Dôme Flax. This compact ceiling speaker is 7.56” in diameter and 3.94” deep -- shallow enough that you should have no trouble finding room for it in your ceiling. Round or square grilles are available; they’re white, and magnetically attached.

The Sub Air ($1290 when bought separately) is different in shape from most subwoofers, measuring 16.14”H x 14.17”W by only 6.3”D -- shallow enough to make it easy to place against a wall or on a bookshelf, or stood upright under a piece of furniture (though the last placement isn’t ideal). And it comes with a wall bracket so that you can mount it above the floor. To make positioning even easier, the Sub Air has built-in wireless connectivity, with a module that plugs into your AVR’s subwoofer output. The only wire you need is the Sub Air’s power cord. 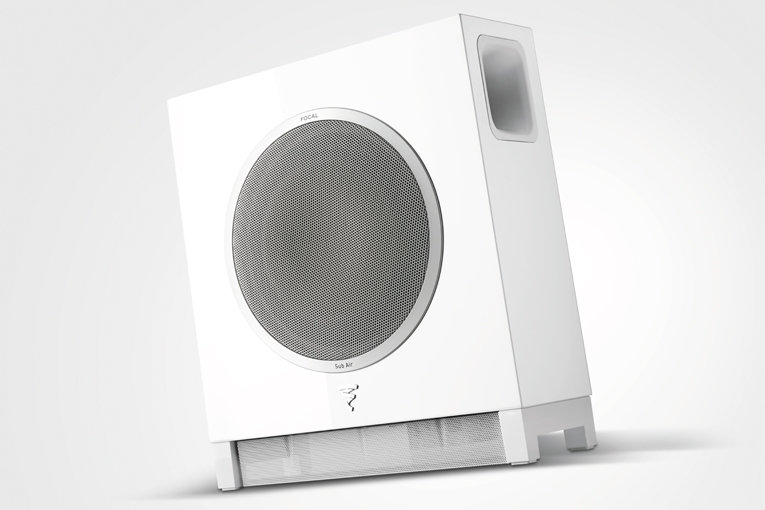 The Sub Air’s 150W RMS amplifier drives an 8.25” woofer with a cellulose-pulp cone. All controls and connections are on the bottom panel: volume control, variable low-pass crossover, 0/180° phase switch, a button for pairing the wireless connector to the sub, and left- and right-channel inputs (RCA). A single port is high on the right side panel. The Sub Air comes in high-gloss black or white to match the Dôme Flaxes, and weighs 17 pounds. 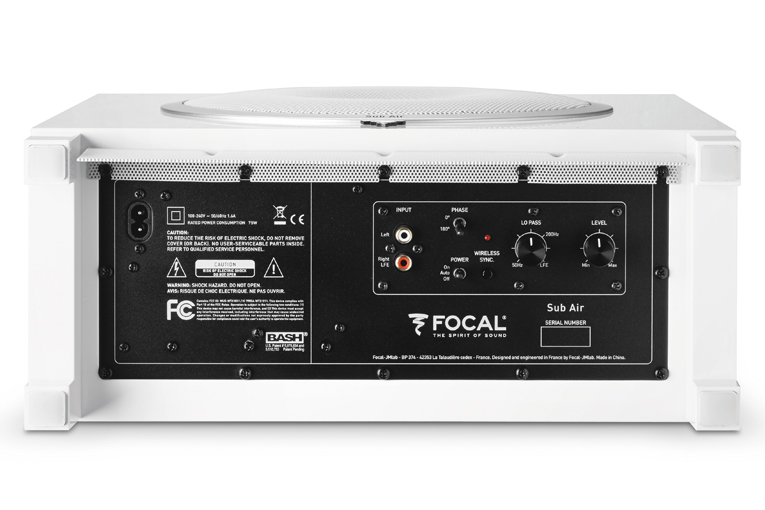 To give the Dôme Flax Pack a workout, I played some Dolby Atmos BDs. First up was John Wick (2014), which features over-the-top sound effects that make aggressive use of all surround channels, including the heights. In chapter 3, Wick (Keanu Reeves) heads to the airport to take his ’69 Mustang Mach 1 out for some laps. As he corners on the tarmac, the sound of the car’s V8 panned nicely through the right front Dôme speaker to the right surround and then to the left height 300 ICW 4 speaker. The timbre of the sound didn’t change a bit -- not surprising, as the drivers in each speaker are identical. The diminutive Sub Air handled the roar of the engine with ease, moving an impressive amount of air.

I had no problem following what limited dialog there is in John Wick -- it sounded clear through the center Dôme Flax. This was no easy feat -- this soundtrack includes lots of characters with heavy Russian accents, and Reeves isn’t the most articulate speaker. With only a single 4” woofer, however, male voices lacked the weight that I hear through larger, more conventional center speakers, especially horizontal models with two woofers. 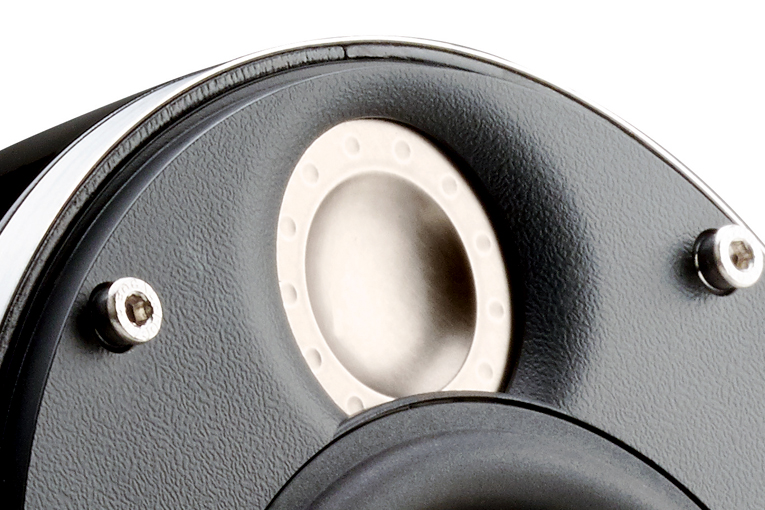 But no one could accuse the Dôme Flax of being polite or subdued in the highs. In chapter 5, the Russian mob comes to Wick’s house to finish him off. Lots of bullets miss Wick and instead find windows and other glass objects. These impacts sounded crisp and realistic through the Dômes’ aluminum-magnesium tweeters, which provided a higher level of refinement than you’d normally hear from a speaker of this size. In this respect, I could tell that this speaker is related to Focal’s Aria 906, which has a similar tweeter and a similar sound.

Focal recommends this system for rooms of 320 to 430 square feet, a range that includes my own space. However, the Flax Pack could have sounded better in my room in two departments: surround envelopment and dynamics. My screen is against one longer wall of my rectangular room, which puts the surround speakers quite far apart. This is why I use rear surrounds to fill in the gap. As well, the two front Dôme Flaxes are on either side of my 92” screen, which places them farther apart than would, say, a 65” display.

All of that became apparent when I watched Aquarela, a documentary about water and ice. The BD has a Dolby Atmos soundtrack, and chapter 5 includes images and sounds of a Greenland glacier cracking and calving icebergs. Through the Dôme Flaxes, these sounds were hauntingly beautiful, but the sounds of birds squawking in the height channels was easily heard at the locations of the ceiling speakers. Ideally, you’d want this type of sound effect to be vaguely above you. Additionally, the roar of ice falling into the sea was punchy, but lacked the deep bass I normally hear from my system. 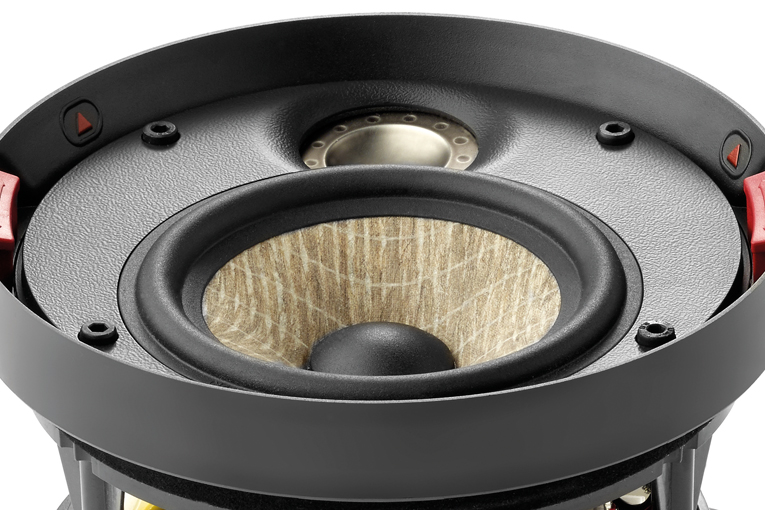 Fortunately, there are easy ways to fix this -- and one is to buy more speakers! I came to this conclusion by turning on my rear surround and front height speakers for a 7.1.4 configuration. I found the surround envelopment much better, and the squawking of birds to be a wash of sound above me rather than restricted to the positions of the ceiling speaker. As for deep bass, a larger subwoofer could augment the Sub Air. By setting the Sub Air’s low-pass crossover higher, and the bigger sub’s low-pass crossover so that it reproduces only the deepest bass, you could achieve the dynamics of a much larger system.

I streamed a variety of tracks from my NAS via the DTS Play-Fi feature on my Anthem MRX 720 receiver. First up was “Mood Indigo,” from the Duke Ellington Orchestra’s Digital Duke (16/44.1 FLAC, GRP). There were tonal differences among the sounds of the three speakers. Through the MartinLogan Motion 4i I heard extended highs that sounded cooler and analytical; trumpets sounded warmer and smoother through the PSB Alpha P3, whose sound was more laid-back. The Dôme Flax split the difference, sounding the most neutral of the three. If I were to match these speakers to a cheap AVR . . . the Alpha P3, with a more forgiving tweeter, would mask any tonal imbalances that might be present but might be a bit subdued; the Motion 4i’s more revealing tweeter might make the sound of that cheap receiver fatiguing over time. The Dôme Flax, with a very refined tweeter that was neither too harsh nor too forgiving, would provide the best balance, and would be my choice. 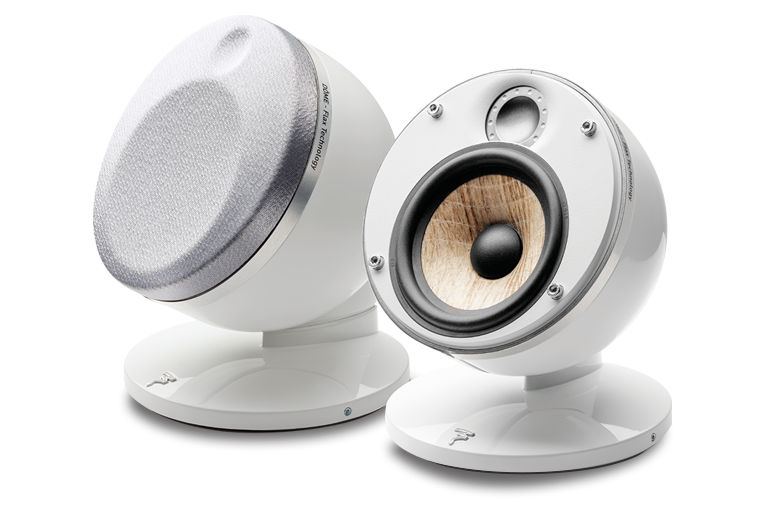 None of these speakers would be your choice if your top priority is deep-bass response. However, the MartinLogan Motion 4i, with its bigger cabinet and innovative folded bass chamber, took the prize for its relatively deeper bass response. Listening to “Mack the Knife,” from Ray Brown’s SuperBass (16/44.1 FLAC, Telarc), I felt greater presence of the deep notes from the three double basses with the Motion 4i’s than I did with either the Dôme Flaxes or the PSB Alpha P3s.

Focal’s Dôme Flax Pack 5.1.2 is a well-thought-out surround speaker system. The versatile Dôme Flax satellite can be used as everything but a subwoofer -- it served equally well as a main front, center, rear or side surround, or height speaker -- and the inclusion of the 300 ICW 4 in-ceiling speakers makes it easy to set up a Dolby Atmos speaker array with an immersive sound. Much like its more expensive Focal siblings, the Dôme Flax system exudes class -- the speakers’ high-gloss finish would look great in any modern living room. The Focal Sub Air is one of the most room-friendly subwoofers I’ve encountered, and unlike with other subs, you’d be hard pressed not to find someplace convenient for it.

As for what I wondered at the beginning -- whether or not this small surround system would prove worthy of the Focal name -- it certainly did. Although its price is hefty at $4290, the refinement in sound, especially in the highs, is rare in this size of speaker. If you’re looking for a great-sounding, unobtrusive home theater speaker array and don’t have room for Focal’s bigger speakers, I highly recommend that you give the Focal Dôme Flax Pack a listen -- in whatever configuration suits your needs.