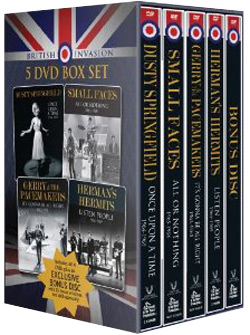 When the Beatles hit number one with “I Want to Hold Your Hand” in January 1964, only one other British act joined them on the charts. Dusty Springfield entered WABC’s weekly survey that week at number 24 with “I Only Want to Be with You.” Springfield is one of the subjects in British Invasion, a five-DVD set from Reelin’ in the Years and the first in a planned series. The set devotes one DVD to Springfield, and one each to Small Faces, Gerry and the Pacemakers, and Herman’s Hermits. Each disc is available separately, but the fifth disc is available only with the box set. All the discs feature extensive performance footage from British, European, and US television.

Springfield had a big blonde beehive hairdo, she wore lots of makeup, and she sang in a full, soulful voice. Dusty Springfield: Once Upon a Time 1964-1969 includes interviews with her, backup singers Madeline Bell and Simon Bell, and Burt Bacharach, who wrote several of her hits. The documentary features her in full performances of 16 of her songs (an option on the menu lets you watch the tunes without interruption and adds four songs). One of the pleasures of the DVD is watching Springfield work. She moves easily with the music, gesturing to underscore a line and giving herself over to the song -- she’s a natural performer, and she’s fun to watch. The DVD shows her versatility and how canny she was in choosing music that was right for her.

There isn’t much here that’s revelatory about Springfield’s personal life. Her bisexuality isn’t mentioned, but the disc touches on her insistence on performing for mixed audiences in South Africa in 1964. Her backup singers and Bacharach remember her fondly and put her music in proper perspective. It’s when she sings, however, that we know her, and I found myself wanting to own her entire catalog after watching her on this DVD. Many of the performances are lip synched, but the live performances, especially those in 1965 for a New Musical Express awards show, are stunning, and you can’t take your eyes off her when she’s onstage. The bonus disc includes footage of nine additional Springfield performances, and that alone justifies going for the box set.

Small Faces never achieved the success in the US that Springfield did, but they were always beloved, popular, and influential in England as exemplars of mod culture. Paul Weller still acknowledges his debt to the band’s musical and sartorial style. Kenny Jones explains briefly what mod culture was in Small Faces: All or Nothing 1965-1968 and he, early band member Jimmy Winston, and Ian McLagan narrate the band’s history in recent interviews. Archival interviews of Steve Marriot and Ronnie Lane fill out the story, and one of the bonus features on the DVD is Lane’s last filmed interview, from 1988, the source for the footage used in the documentary. As with the Springfield DVD -- with all the DVDs in the set, in fact -- it’s the musical performances that tell the story, and the documentary portion of the film includes the band in 23 television and filmed appearances. Perhaps the most interesting part of the DVD is a primitively filmed series of excerpts from a show at the Marquee Club in 1966, in which the band plays tough rhythm and blues.

Small Faces thought of themselves as blues and R&B purists and hated some of the material they were saddled with, but from this distance even a pop trifle like “Sha La La La Lee” sounds like rock’n’roll. By 1967 the band was showing signs of psychedelic influence, and they recorded a series of pop gems including “Here Come the Nice,” “Green Circles,” and “Itchycoo Park,” which McLagan tells us is his least favorite of their records. The DVD closes with a lengthy performance on BBC television of seven songs from the band’s final album, Ogdens’ Nut Gone Flake, including Stanley Unwin’s entertaining narration. One of the bonus features lets you play 27 of the band’s songs without interruption. Every one of them is a testament to their energy, growth, and innovation.

The Herman’s Hermits DVD is an entertaining look at ’60s pop stardom, and the Gerry and the Pacemakers disc features the ebullient Gerry Marsden’s reminiscences and comments by Bill Harry, the influential Liverpool music journalist who covered the Beatles, Marsden, and many other important Liverpool musicians. In addition to the performance footage by Dusty Springfield that I noted above, the bonus disc has seven songs by Herman’s Hermits and 90 minutes of interview material that was not used in the other four discs. The four primary discs have a generous portion of worthwhile additional material and excellent annotation. The film and video from old television shows sometimes appears dated, but overall the set is an enjoyable view. Reelin’ in the Years has done an excellent job of gathering some great moments by British Invasion musicians.