Elvis Costello’s 31st studio album, Hey Clockface, comprises 14 tracks that the songwriter recorded in three cities: Helsinki, Paris, and New York. He used different sets of musicians in Paris and New York, and played all the instruments on the three songs recorded in Helsinki. The album takes in the many styles he’s embraced over his career, from new wave rock to sophisticated pop, jazz, and other, more experimental genres, but he pulls the disparate elements together into a pleasing and cohesive whole.

Nine tracks feature Steve Nieve and a group of French musicians Nieve gathered for the recording that Costello called “Le Quintette Saint Germain.” According to the liner notes, the Quintette improvised in the studio, presumably with notations from the composer, since the accompaniment is precise and well fitted to the songs. Costello did arrange the trumpet and saxophone intro to “I Do (Zula’s Song)” but throughout the disc the French musicians respond with taste and sensitivity. Pierre-François Dufour’s cello, for example, adds the right hint of sadness to “The Last Confession of Vivian Whip,” which Nieve and Costello co-wrote. 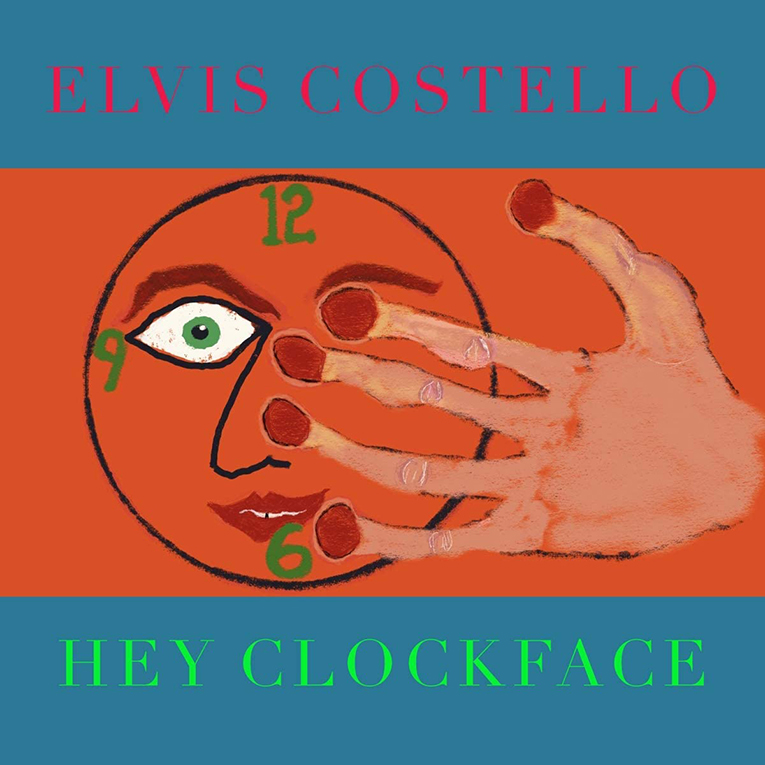 Steve Nieve and Le Quintette Saint Germain play behind Costello on “Revolution #49,” a spoken-word piece. The lengthy instrumental opening sounds vaguely Middle Eastern and Costello’s poem is both fatalistic (“Life beats a poor man to his grave”) and hopeful (“Love makes a rich man from a beggar”). After that moody opening, Costello jumps into “No Flag,” an uncompromising rock’n’roll song with a strongly stated bass line, gnarly guitars, and hard-edged drums. All the instrumentation is courtesy of Costello himself, and cuts as deeply as his angry vocal.

Sampling and other effects add sonic dimension to “No Flag,” as they do to “We Are All Cowards Now” and “Hetty O’Hara Confidential.” Costello credits all three songs to “The Helsinki Sound,” and is responsible for the conventional instruments and what he lists as “other noises.” The percussion on “Hetty O’Hara Confidential” is provided by a drum machine and Costello’s processed vocal beats. All manner of sounds swirl around the fictional tale of a gossip columnist whose profession is now in everyone’s hands:

“I Do (Zula’s Song)” and “The Last Confession of Vivian Whip” wouldn’t sound out of place on Look Now, Costello’s 2018 disc of urbane pop tunes, but “Hey Clockface/How Can You Face Me?” borrows from Fats Waller (who gets a co-writing credit) and channels old New Orleans jazz. Other songs, such as “What Is It that I Need that I Don’t Already Have?” are harder to pigeonhole while being unmistakably the work of Costello’s imagination.

Michael Leonhart, known best as a jazz trumpeter, produced the two songs recorded in New York and played most of the instruments on them. Costello added vocals from another location because of COVID-19. Bill Frisell co-wrote and played guitar on “Newspaper Pane,” which has a terrific rock’n’roll energy and backbeat. Guitarist Nels Cline joins them on lap steel for the complex and dark-toned “Radio Is Everything,” but I wish Costello had sung a melody over it, rather than having a second spoken-word piece on the album. 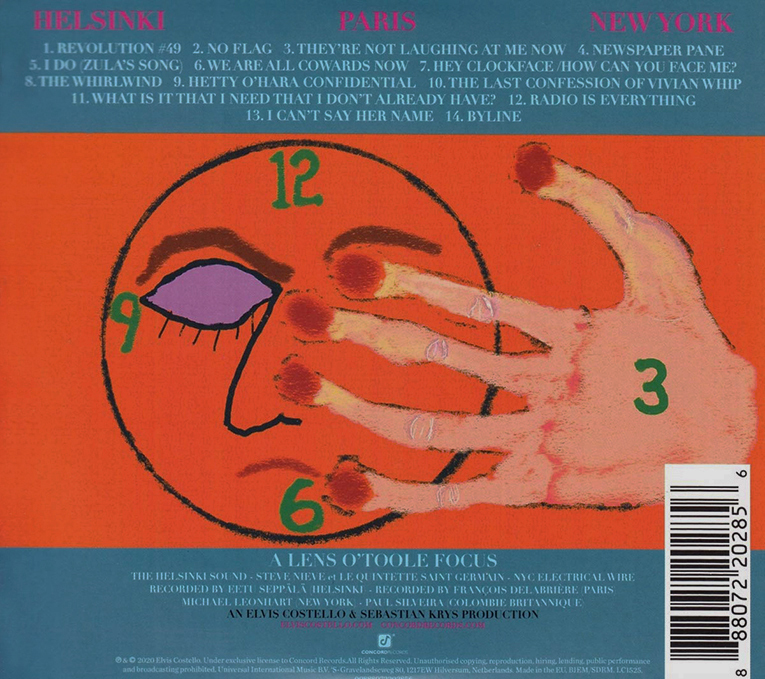 Costello fought a bout with cancer two years ago and, at 66, he’s contemplating the effects of age and time on Hey Clockface: “I Can’t Say Her Name” is about romance and regret; “What Is It that I Need that I Don’t Already Have?” looks at chances missed and the brave facades we put on; “Byline” recalls a long-ago romance and its end. It’s hard to call the album confessional. Even the songs sung in the first person convey the sense that they were written to be sung in character, but they’re obviously the work of a mature songwriter contemplating what is left of his life.

Sonically, Hey Clockface is somewhat frustrating. “No Flag” sounds overstuffed and the bass is flabby, but the other Helsinki tracks, while densely packed, are cleaner. “Newspaper Pane” is also bass heavy, but “Radio Is Everything” is more spacious, making it easier to pick out details. The songs recorded in Paris are fine, with Costello’s voice well focused and out front. The inconsistent sound serves, to some extent, to reinforce the eclecticism of Hey Clockface, which is its strength. It presents the many sides of Elvis Costello, and he doesn’t appear to be ready to coast into a comfortable old age.