John Mellencamp: "No Better Than This" 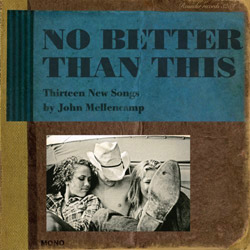 John Mellencamp’s new disc takes such an honest stand against the mechanization and digitizing of modern music that it makes recent discs by most other pop musicians sound contrived. The funk and fire of American music history flows through it, but I’ve long felt that was true of Mellencamp’s records. No Better Than This sounds like an old Gibson acoustic or National steel guitar that has gotten richer and more complex with age.

Mellencamp and T Bone Burnett, who produced the singer’s last disc, Life Death Love and Freedom (2008), traveled through the South looking for landmark locations where they could record the 13 songs Mellencamp had written. They stopped at the First African Baptist Church in Savannah, Georgia, the oldest African-American church in North America, then went to Sun Studios in Memphis, and wound things up at rooms 413 and 414 in the Gunter Hotel in San Antonio, where Robert Johnson and his producer, Don Law, recorded more than 70 years ago. Mellencamp brought some of his band members, a 1955 Ampex 601 mono tape recorder, and an RCA ribbon microphone.

Burnett brought his own talents to the sessions and enlisted the aid of a few other musicians. Most of the tunes on No Better Than This are built around simple arrangements for four or five instruments, sometimes fewer than that. "Save Some Time to Dream" uses two guitars, an acoustic bass, and very simple percussion. Mellencamp sings "Right Behind Me" with just an acoustic guitar and violin backing him. It’s a pleasure to hear musicians playing well, without effects, and closely paying attention to the singer and responding to what he’s doing.

"No One Cares About Me" and "Coming Down the Road" have so much of the recording feel of vintage country songs that they sound like distant echoes. "Easter Eve" is like an old folk song, and the tale it tells is as sharply detailed as a short story. It contains some of Mellencamp’s best lyrics, and the musicians give him beautiful, simple support. The players here, among them guitarists Marc Ribot, Burnett, and Andy York, along with bassist Jay Bellerose and violinist Miriam Sturm, have a firm grasp on the genres into which Mellencamp taps, but the music never feels old, just real and genuine.

I don’t want to push too hard for a disc that in some ways seems modest in its methods and intent. It would be easy to take the distorted tube amps and slapback reverb on "Coming Down the Road" for artifice, but Mellencamp and the other musicians on the disc play with a conviction and freshness that makes it all sound genuine. Still, only music critics and purists -- not the average kid with an iPod -- are likely to be impressed by the attention to detail. In a time of economic difficulty, Mellencamp has reached back to the Great Depression and found the reassurance of tradition and folk wisdom. When I reviewed Life Death Love and Freedom two years ago, I called it a masterpiece. To my surprise and delight, Mellencamp has topped it.