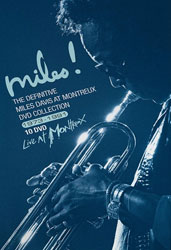 When Montreux Jazz Festival founder Claude Nobs asked Miles Davis to appear at the festival in 1973, the great trumpeter’s reply was typically acerbic: "Your offer is an insult to my color and talent." When Nobs finally convinced him, Davis demanded a Ferrari, then complained when it was red instead of silver. Working with Davis took a lot of patience, but the results over a long career were worth the effort. Miles! Live at Montreux: The Definitive Miles Davis at Montreux DVD Collection 1973-1991 -- over 18 hours of music on ten DVDs from his appearances at Montreux -- is a testament to the brilliant, sometimes difficult music Davis was making in the last third of his life. Nobs produced the 20-CD, 19-hour set of Davis’s Montreux performances for Columbia/Legacy in 2002, and much of that music is included here.

Nobs was able to convince Davis to let him record and videotape all of his performances, and the video brings you very close to the musicians, especially Davis. The sound throughout the set is remarkably clear and intimate in all three formats: Dolby Digital Stereo, Dolby Digital 5.1, and DTS Surround. The DTS is best by a slight edge, with a deeper soundstage and less compression, but the mix varies from show to show. For example, I preferred the two-channel sound on the 1984 discs. The aspect ratio of the video is 4:3, with the exception of the 1991 disc, which is 16:9. The images, therefore, aren’t all high-definition, but since the majority of the shots are close-ups of the players, there’s enough clarity and detail to make them enjoyable when viewed on a large-screen TV.

Most of the discs run 90 to 120 minutes, but disc 1, from 1973, consists of a single performance of "Ife" that runs 27 minutes, padded out to nearly two hours with interviews with Nobs and a number of well-known jazz musicians. (The CD set includes more music from this date.) While jazz fans will enjoy the interviews, it’s the music they’ll focus on. Davis had released his most controversial recording, On the Corner,the year before, and the music in this set is rhythmic and funky, hypnotic in its repeated bass lines and chord patterns. Miles and the other players, especially saxophonist Dave Liebman and guitarists Reggie Lucas and Pete Cosey, probe the music for melodic and emotional possibilities. Miles plays electronic keys behind the other players, and directs them with subtle gestures that the close camerawork makes visible.

Bad health and personal problems kept Davis away from Montreux until 1984, after which he appeared there every year but 1987. This set devotes two discs each to his 1984 and 1985 performances. The playlist for the afternoon and evening concerts is the same, but it’s the subtle choices the musicians make from performance to performance that make the two sets from each year worth listening to and comparing. In the 1984 evening set, for instance, Davis stops Daryl Jones and has him play the introductory bass line slower than he’d played it earlier that day. At this point in his career, Davis was playing funk, blues, and pop tunes, and it’s exciting to hear the differences in Cyndi Lauper’s "Time After Time," which he played at every appearance at Montreux except the first and last. The bands for the 1984 and 1985 shows are roughly the same, but touring and playing together made them tighter, the members more responsive to each other; the rush of creativity makes the music compelling.

Robben Ford takes over the guitar duties from John Scofield in 1986. That set opens, as in 1985, with a medley anchored by "Theme from Jack Johnson," but Davis introduces a few new tunes, such as "Tutu," and Ford gives the music a much stronger blues influence. By the next show, in 1988, Davis has dropped the guitarists and added a second bassist, a lineup he used, with minor variations, for his next two appearances at Montreux. The electric keyboards, including Davis’s, create great washes of sound, but the quality of the playing all around lifts the music out of its ’80s trappings; the 1990 appearance is particularly sharp and lean, perhaps because Davis pared the band by one keyboard.

The final DVD features Davis’s 1991 performance of arrangements he’d recorded over the years with Gil Evans. Quincy Jones conducts a 50-piece ensemble as Miles revisits music he’d performed as far back as the late ’40s. It was uncharacteristic of Davis to go into his past, but Nobs and Jones convinced him to help celebrate the festival’s 25th anniversary by doing just that. The orchestra creaks in a few spots, and Davis looks frail. He plays well, however, sharing the lead with trumpeter Wallace Roney; the concert, warts and all, is very moving. Miles Davis died less than three months later.

Davis’s 1980s recordings sometimes felt too structured, but his performances on these DVDs through the ’80s and into the ’90s crackle with spontaneity and the exhilaration of playing in the moment. There’s an occasional flubbed note or meandering improvisation, but one of the advantages of this set is that those flaws are allowed to remain, like the stresses in a handmade leather bag. Miles Davis was one of the geniuses of 20th-century music. On this set he searches and experiments, and very often emerges triumphant.