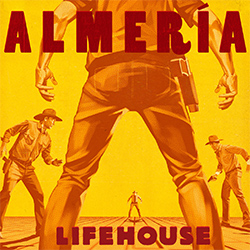 Lifehouse’s breakout album, No Name Face, was released in 2000, when I was in 10th grade. I loved it. Their hit “Hanging By a Moment” was only the third song in history to have been named “No.1 Song of the Year” on Billboard’s Hot 100 chart, despite never having actually reached No.1 in the magazine’s charts. I have no recollection of Lifehouse after No Name Face, primarily because I never bought any of their subsequent four albums. But with the release of Almería, I endeavored to reassociate myself with this Los Angeles-based rock band to see how they’d fared in the 12 years since.

Having picked up the deluxe edition of the album, which includes three additional songs, it took me only a few seconds to recognize the inimitable voice of lead singer Jason Wade. Though one would never mistake Almería for anything other than a polished studio production, it’s an interesting collection of music, and not all homogenous drivel. The album takes several different tacks, veering from the radio-friendly “Between the Raindrops” and the Coldplay-esque “Nobody Listen” to an almost country vibe in “Slow Motion” and “Right Back Home.” The rest of Almería is very reminiscent of No Name Face, with which I am still intimately familiar.

The radio-friendly songs benefit from catchy harmonies, especially “Between the Raindrops,” which features guest singer Natasha Bedingfield. The recording quality of this track is strong, with Wade’s etchy voice in stark contrast to the surrounding guitars and synthesizers. His lyrics are a bit uninspired -- “Hold on and take a breath / I’ll be here every step / Walking between the raindrops with you” -- but his delivery is impassioned and genuine. “Only You’re the One” has similar qualities, with a strong central vocal that supports the rest of the music. In this anthem of love, unfortunately, the last ounces of resolution are buried as the smoothly sweeping guitar riffs push the song along, giving it -- and, indeed, the entire album -- a bit of a filtered quality.

Yet there’s a silver lining. “Where I Come From” sounds like vintage Lifehouse, as if the song had been written and performed for the band’s first mixtape. And in my favorite cut, “Aftermath,” the band wears its collective heart on its sleeve. A graceful piano introduces Wade’s closely miked voice -- his best effort on the album -- and builds to a grand climax that closes out the song. The keyboard runs from left to right of the soundstage, rich chords resonating from the player’s left hand, the melody quietly played by the right, as the drums sound from much farther back.

While Almería doesn’t set a benchmark for sound quality, it’s a strong showing for a large studio recording, and Lifehouse do their best to retain their signature sound while treading some new ground. This album has quite a bit of personality, and offers an easy and pleasing 50 minutes of music.