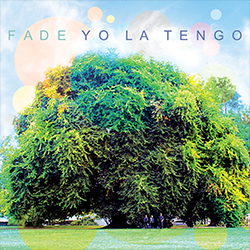 The indie-rock group Yo La Tengo will be 30 in 2014, but the three-member band from Hoboken, New Jersey, formed by the husband-wife team of Ira Kaplan and Georgia Hubley, shows no sign of becoming stale. Fade is their 13th studio album, and its title at first struck me as apt -- the music kept fading from my consciousness as I played it in the background during a few cold weekday evenings. The gentle guitar melodies and lazy drumwork offered a rhythmic listening experience that at first I misheard as uninspired. Repeated listening and reflection made it apparent that this album is the result of three decades of musical refinement.

The sonic feel of the CD is anything but digital, with a warmth and softness that pervade all ten tracks. It sounds almost analog, which is just as well -- Fade is also available on LP. With its graceful combination of cooing vocals and simple guitar work, Fade strikes me as a perfect accompaniment to a warm summer day.

“I’ll Be Around” is exemplary in this regard: The simple guitar work lays a lighthearted foundation for the ruminative lyrics: “When I stare into space / I’m looking for you / And I can see you at times.” The melody veers away from the classic toe-tapping variety, and more toward the stick-your-hand-out-the-window-of-your-car-and-ride-the-wind type. The next song, “Cornelia and Jane,” offers more of the same, in a good way, though at a faster tempo and with a bit more musical texture. Both tunes are light on their feet, with a delicacy too often absent in modern arrangements.

While many of the songs here tend to sound alike, a few of them open raw: “Stupid Things” and “Two Trains” proceed with a bit of guitar-based distortion, and a background hum runs throughout the penultimate track, “The Point of It.” The album’s finale, “Before We Run,” is about as anthemic as Yo La Tengo gets, with an arrangement for strings that ebbs and flows its way to a mellow conclusion: “Take me there / It’s only us.” All are parts of the album’s casual tone, which probably wouldn’t be so endearing were the production style squeaky clean. It’s hard to lavish praise on a recording that’s purposefully rough around the edges, with voices, guitars and other instruments coalescing into a feel-good whole.

What Fade lacks in outright detail, however, it makes up for with thoroughly mature musicality. The album is more sage than exciting; while I couldn’t imagine many folks occupying their favorite chair to listen intently from start to finish, I suspect that many will discover a different way to appreciate it. It’s not so vulgar and immature as to occupy your attention. Rather like an old dog, it’s more a faithful companion that asks for only your respect and your appreciation.