David Bowie: "The Next Day" 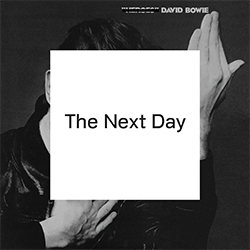 In 2004, after suffering a heart attack while on tour, David Bowie made rare guest appearances onstage with other musicians, such as Arcade Fire, and helped out on a handful of recordings. For the most part, though, he laid low long enough that most of his fans assumed he’d retired. He’d earned it. After more than 30 years of image changes and musical experimentation, the most radical thing David Bowie could do was refuse to drag himself out for a nostalgia tour.

More than any rock singer except, perhaps, Bob Dylan, Bowie has always had an uncanny knowledge about how to present himself to the public. So on January 8 of this year, on his 66th birthday, he quietly released a single, “Where Are We Now?,” and announced the upcoming release of his 27th studio album, The Next Day. Not making a big splash was the right move. People anticipated and talked about the new disc, Bowie’s first since Reality (2003), and it debuted at No.1 in the UK. Tony Visconti, who had coproduced so many of Bowie’s best recordings, was onboard again, as were a number of musicians who’ve played with Bowie over the years.

The Next Day isn’t revelatory or a step forward as much as it is an affirmation of much of what Bowie has done over the last 45 years. The spindly, slippery guitars and staccato vocal in the title track recall “Black Out,” from Heroes, and the music’s excitement and hard slam sound as fresh as, well, all of today’s bands that still borrow from Bowie. “Where Are We Now?” is an elegiac, open-ended ballad, a tour of the changes in the singer’s beloved Berlin and his own reactions to the passage of time. “The Stars (Are Out Tonight)” is an amusing, perplexed, ambivalent look at stardom.

The musicians on The Next Day have history with Bowie, but they sound fresh here, and Bowie uses them well. Gail Ann Dorsey’s thumping, funky bass line in “Boss of Me” contrasts with Gerry Leonard’s edgy rock guitar, but Steve Elson’s baritone-sax lines give the song its unique texture. Elson also plays against the jagged guitars of “Dirty Boys,” the tune on this disc that’s most like Bowie’s early recordings. The arrangements are full of smart touches, such as the ironic doo-wop vocals in “Valentine’s Day,” the subtle strings in “The Stars (Are Out Tonight),” and the intertwined guitar lines in “Dancing Out in Space.”

Bowie’s singing on The Next Day is honest and unmannered, whether he adopts the persona of a soldier (“I’d Rather Be High”) or a high school shooter (“Valentine’s Day”). The disc is mixed so that its sound is current: The guitars are very much forward and the drums ring out, but The Next Day is sonically dense and rich without feeling crowded or compressed. The acoustic guitars in “The Stars (Are Out Tonight)” bubble up from the mix to flesh out the song, Zachary Alford’s drums pop in “Love Is Lost” but are organic to the tune, and throughout the album, the guitars have a lot of presence without overpowering other instruments.

In late March, at London’s Victoria and Albert Museum, Bowie opened an exhibition consisting of costumes, videos, and other artifacts from his long career. The show is titled David Bowie Is, and it’s true that he always seems to be in the moment. In The Next Day he occasionally looks at time and mortality, but never with sadness or sentimentality. David Bowie sounds as if he’s happy to be here, now, still making music.