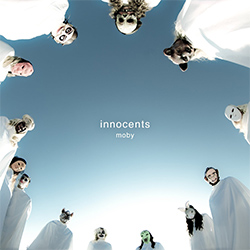 No one will argue with the notion that, since the critical and commercial success of his fifth album, Play (1999), the music of Moby has been in gradual decline. That album’s success was a surprise even to its creator, who captured lightning on a disc by building, on a largely electronic foundation, an eclectic combination of samples. The result has sold ten million albums.

Moby, now 48, veritably owns the domain of brooding melancholy, but on Innocents, perhaps his best effort since the stratospheric heights of Play, emotional depths are plumbed less deeply than on some of his earlier albums. Innocents doesn’t carry the emotional baggage of Wait for Me (2009), and takes on a more dynamic feel due to Moby’s decision to bring in a raft of guest musicians.

There are several standout tracks. Seattle-based singer-songwriter Damien Jurado is featured in “Almost Home,” and his airy mezzo-soprano lilts over the sweeping waves of synthesizers that are Moby’s trademark. The singing on this track is infectious -- I kept hitting Repeat to get just one more taste. It’s somnambulant in feel, and in concert with the crooned lyrics: “So let it go / Wake up / Wake up / Wake up / We’re almost home.” The surprisingly uplifting “The Perfect Life” features Moby with Wayne Coyne, of the Flaming Lips. Despite this song’s -- and, indeed, the rest of the album’s -- having been recorded in Moby’s Los Angeles apartment, the sound quality is admirably high. Coyne’s guitar dances from left to right throughout the track. There’s loads of texture on his guitar strings, and it helps bookend the various singers, including the gospel choir that closes out the song, complete with handclaps. It has quite an inspirational feel.

“The Last Day” begins in a more minimalist mode, with Skylar Grey cooing wistfully. Layers of accompaniment are gradually built up to create a tapestry of sound on which Grey’s sultry singing balances. Somber and a bit mournful, Grey’s lyrics are typical of a Moby song, and Moby’s electronic underpinnings sweep the track along on a torrent of grandiosity. It sounds as if it belongs on a soundtrack -- like Moby’s “Extreme Ways,” used as the theme for the Jason Bourne films.

“Don’t Love Me” features singer Inyang Bassey, a fabulously talented Brooklyn native with a sumptuous voice. With repetitive lyrics, and anchored by a throbbing piano, it’s not a particularly deep track -- but it’s vibrant and soulful, with some spartan organ work that’s reminiscent of some of Moby’s more inspired past work.

The best track here is “The Lonely Night,” featuring Mark Lanegan, a baritone in the mold of Tom Waits. It’s a minimalist recording: a simple electronic beat in the left channel, and elsewhere some meandering atmospheric synthesizers. Lanegan’s positively enormous presentation dominates the track, and is as detailed as you want. Lanegan is so closely miked that I felt I could sketch the contours of his vocal cords. His guttural, gravelly tones were almost palpable.

Innocents is well worth hearing. It marries Moby’s highly refined prowess in electronic music with an array of talented artists. The result is a disc that is undeniably his, but with sufficient variations on a well-trodden musical theme to warrant the attention of old fans like me, as well as curious passersby.