Nick Lowe: "Quality Street: A Seasonal Selection for All the Family" 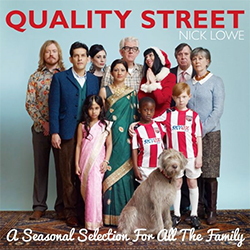 As I’ve noted elsewhere, Christmas music is a guilty pleasure of mine. I’ve probably played Vince Guaraldi’s A Charlie Brown Christmas more times than any other disc in my collection. Two years ago, my wife picked up for me both volumes of Blues, Blues Christmas, which include such obscurities as Gatemouth Moore’s “Christmas Blues” and Lightnin’ Hopkins’s “Merry Christmas.” This year, I add Nick Lowe’s Quality Street to my seasonal lineup.

Lowe says that when he was approached by his British label, Proper Records, about recording a Christmas disc, his tongue-in-cheek reaction was, “Do they really think I would wish to sully my good name on this tawdry and vulgar commercialism?” But after a while, he thought it might be fun, and it really is. Quality Street includes some traditional songs done untraditionally, a few pop Christmas tunes from the recent past, and some new ones by Lowe and others.

A rockabilly-flavored “Children Go Where I Send Thee” opens the album with a jolt of reverence and joy. The track has a Sun Records vibe, with guitarist Johnny Scott adding a few old-time licks to liven things up. Geraint Watkins’s Vox or Farfisa organ creeps in from a distant part of the room to give the music a haunting quality, but Lowe plays it straight, respecting the song’s history and sentiment. Watkins plays a beautiful Hammond B3 intro to set the tone for “Christmas Can’t Be Far Away,” an old Eddy Arnold gem by Boudleaux Bryant. Lowe sings it every bit as smoothly as Arnold did, and without a hint of irony.

Roger Miller’s touching “Old Toy Trains” is moving without being too sentimental, and Lowe’s gentle mastery of singing is one of this disc’s many pleasures. Lowe’s own “Christmas at the Airport” and “A Dollar Short of Happy,” the latter co-written with Ry Cooder, are humorous looks at the down side of the holidays, but Quality Street never descends into cynicism. Lowe is simply tipping his hat to a strain of Christmas music that acknowledges that the season can sometimes be a drag. (For more of that, check out the Everly Brothers’ “Christmas Eve Can Kill You,” and a good number of the tracks on Blues, Blues Christmas.) Roy Wood’s “I Wish It Could Be Christmas Every Day” closes Quality Street on a happy note.

Lowe’s Christmas gift to audiophiles is a terrific-sounding disc. He’s always been an unfussy producer, but here, he and co-producers Robert Treherne and Neil Brockbank give each instrument and Lowe’s voice plenty of space. The result is a deep, wide soundstage, with Lowe out in front and into the room. The sound is uncluttered, and the performances feel relaxed because of the leader’s comfort with his band and its ability to play in a variety of styles.

Perhaps the most enjoyable thing about Quality Street is that Lowe takes the best things about the season -- peace, tradition, family -- at face value, and treats them with both respect and good humor. The cover depicts a very modern group of holiday celebrants, multicultural and multigenerational; Nick Lowe’s good wishes for the season should reach across all those lines. I look forward to hearing this disc between Ella Fitzgerald’s Ella Wishes You a Swinging Christmas and Christmas with Johnny Cash.