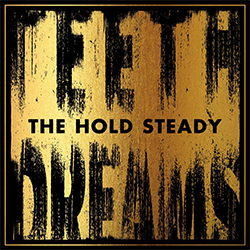 One of my friends dismisses the Hold Steady as “a kind of baroque Bruce Springsteen.” That’s probably why I like them. Early Bruce fans like me cherish his first two albums for their unabashed romanticism and long-form storytelling, and the Hold Steady must have listened to them as much as I have. They also appear to have been influenced by Graham Parker’s records with the Rumour. Parker, like all cynics, is at heart a disappointed romantic, but with the Rumour he buried his anger in snarling guitars and a great rock’n’roll voice.

Teeth Dreams is the Hold Steady’s sixth release, and you couldn’t ask for a better argument for overdriven guitars than the ones that begin this album. Bobby Drake’s lean drumming keeps things firmly grounded -- nothing fancy, just the backbeat the song needs. Galen Polivka’s bass lines are similarly straightforward and just as effective. While longtime fans might miss Franz Nicolay’s keyboards, the group’s current three-guitar lineup makes for a densely layered sound that creates an exciting backdrop for Craig Finn’s songs about urban life.

Finn’s lyrics seem less influenced by Springsteen than by the novels of Sol Yurick (The Warriors) or Irving Shulman (The Amboy Dukes). Finn’s gang in “I Hope This Whole Thing Didn’t Frighten You” sounds like something from the 1950s:

Finn’s descriptions of the occasional temptations of the city are more current, such as the “salted rims and frosted mugs” in “Spinners,” and throughout the songs there’s a sense that too much partying and too many late nights wear you down.

What makes the Hold Steady worth hearing are killer guitar riffs that lodge in the ear the way AC/DC’s do. “Big Cig” has ringing, sustained guitar chords and a terrific fuzz-bass line from Polivka. Controlled feedback helps move the song, but the recurring chord progression that opens the tune keeps bringing you back. At nine minutes, “Oaks” could have been too long by half, but the ballad has drama and a good sense of dynamics, along with a well-developed guitar solo by Tad Kubler and a throbbing, distorted rhythm guitar from Steve Selvidge. The tube amps sound like they’re about to blow apart -- as close to a tribute to Crazy Horse as any band has gotten.

Producer Nick Raskulinecz (Foo Fighters, Velvet Revolver, Rush) has given Teeth Dreams a dense, gloppy sound. Since the band favors a thick, packed approach anyway, Raskulinecz probably thought pushing everything forward would add to the excitement. But details get lost, and it’s fatiguing to listen to until you make your peace with it. This is by no means an audiophile recording.

In the many articles I’ve read about the Hold Steady, none has mentioned Graham Parker. Some Parker fans have noticed the connection, but younger critics seem unaware of Parker. To them and to the Hold Steady’s fans, I suggest picking up copies of Howlin’ Wind or Heat Treatment, both from 1976, or Squeezing Out Sparks, from 1979. Prepare to be slayed.