Jazz pianist Justin Kauflin was the subject of a documentary film, Keep On Keepin’ On, which chronicled his tutelage under the great trumpeter Clark Terry. Terry, who died in February, mentored Kauflin for five years and helped him overcome stage fright. Kauflin, blind since age 11, had studied music at William Paterson University and went on to further education with pianist Mulgrew Miller before coming under Terry’s wing.

Kauflin produced his debut CD in 2008, Introducing Justin Kauflin, but Quincy Jones, a close friend of Terry’s, produced Dedication, which features the pianist in quartet and trio settings. Kauflin’s technical skills and sure touch are apparent from the disc’s opening notes, as are his skills as a composer. “Elusive” features a flowing melody, stated by guitarist Matt Stevens with expansive chord support from Kauflin. The pianist’s solo is a dazzling display of speed and melodic invention that stays firmly rooted in the outlines of the tune. Kauflin shows a firm understanding of the importance of dynamics in creating drama and excitement. 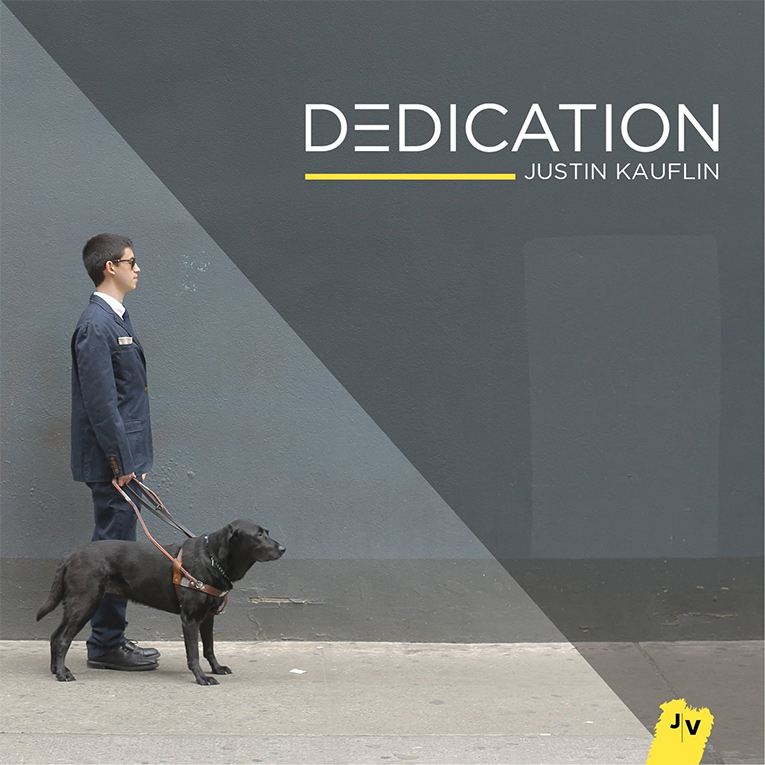 “For Clark” is Kauflin’s tribute to his teacher, a moving and understated trio piece with a strong blues tint. Once again, Kauflin dazzles with his command of the piano, playing long, quick lines without sacrificing the beauty of his melody. “The Professor,” his shout-out to Miller, opens with a striking chord progression and swinging drum accompaniment from Billy Williams. Stevens again states the theme, which he and Kauflin expand on in their solos. The finesse of Kauflin’s long melodic lines reminds me of Bill Evans, but Kauflin has a more pronounced gospel influence in his playing.

Williams and bassist Christopher Smith show an acute understanding of Kauflin’s compositions and play key roles in helping them develop. Williams swings hard, but his accents and asides throughout add variety and color to Kauflin’s arrangements. His power and sense of dynamics give a track like “Tempest” its focus, and help Kauflin’s musical themes develop. Smith is so understated that it takes a few plays of the disc to realize how important his role is in keeping the music well grounded, but his solos show him to be a nimble player.

The three trio pieces show Kauflin to such advantage that I sometimes wish the disc had leaned harder in that direction. “Up and Up” is the shortest piece on the disc at under four minutes, but Kauflin’s open, ringing chords and dazzling melodies are completely engaging. “Tempest” is a good example of how his left hand builds a song harmonically while his right lets the melody flow effortlessly. 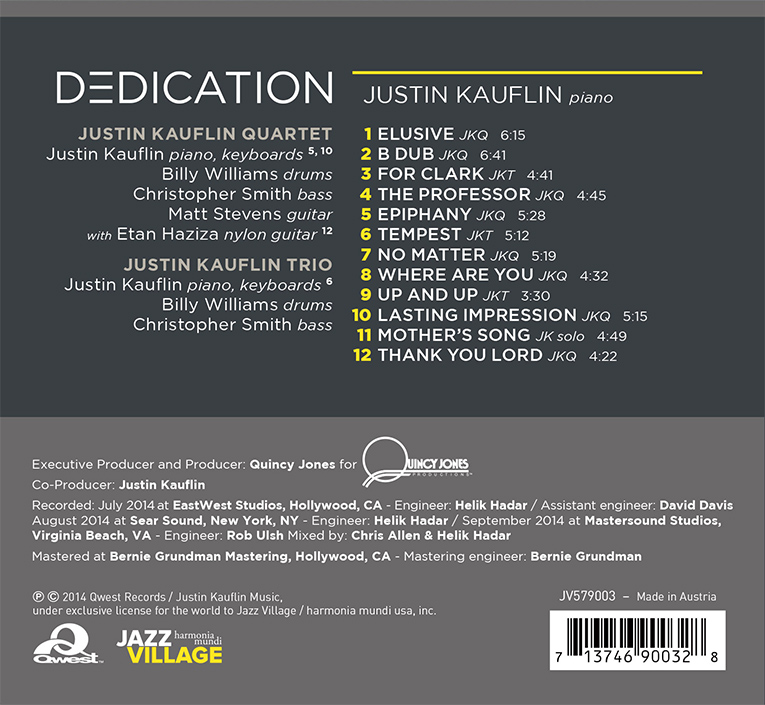 Kauflin recorded Dedication at three studios, and Bernie Grundman’s mastering gives them a consistent sound. I will venture a guess that the trio pieces were done at Sear Sound in New York, and they are analog. Williams’ drums have more snap and three dimensionality, and Smith’s bass has more body and attack. The other tracks sound good, but occasionally they are too digitally clean and lack the punch the trio pieces have.

Guitarist Matt Stevens plays such a strong role in the quartet tracks, often stating the theme of the compositions, that I wondered if Kauflin felt more comfortable sharing the leadership duties. He need not worry. The three trio selections and the solo, “Mother’s Song,” are compelling and deeply rewarding. He and Stevens mesh well, but the next time Kauflin should carry the disc on his own.