The Prodigal Son, Ry Cooder’s 17th solo studio recording (not counting his many film scores), is his first such outing since Election Special (2012), and the first since Chávez Ravine (2005) that doesn’t overtly address political themes. While on his last five albums Cooder was the primary composer, on The Prodigal Son he returns to his role as interpreter of songs from America’s past. The emphasis is on old blues and country gospel, but Cooder also includes three of his own compositions that fit well with the vintage tunes he’s chosen.

Cooder’s mandolin sets an easy tone for “Straight Street,” a mid-1950s hit for the Pilgrim Travelers that he sings gently. Joachim Cooder joins him on drums as Ry fills in the arrangement on banjo, guitar, and bass, with a chorus adding beautiful old-time harmonies to Cooder’s lead vocal. “You Must Unload,” by Blind Alfred Reed, is from the late ’20s; Cooder sings the powerful lyrics (see below) in a reserved but emotional vocal supported by Aubrey Haynie’s beautiful violin playing. 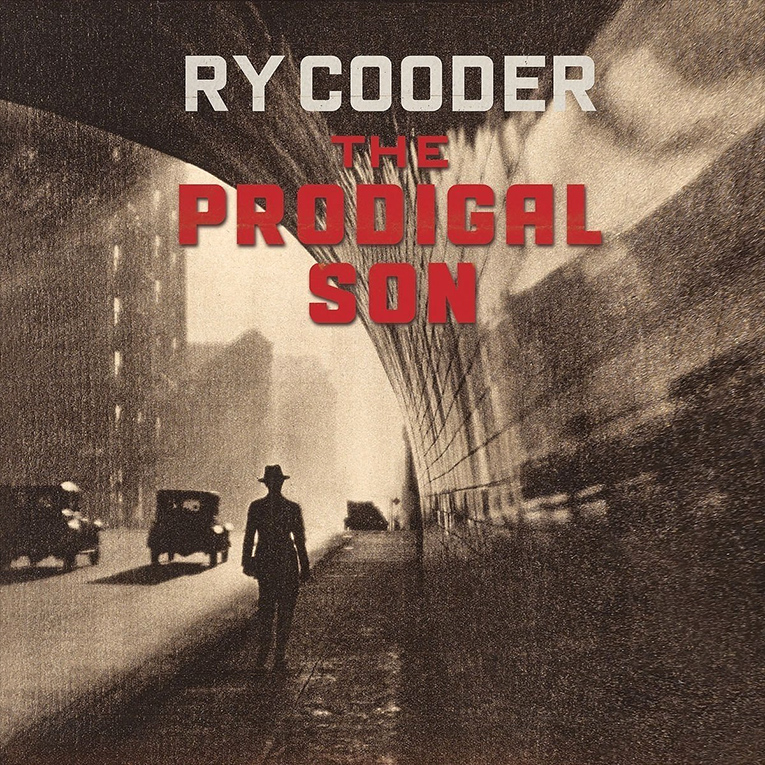 Blind Willie Johnson’s “Everybody Ought to Treat a Stranger Right” is a rollicking blues song that Cooder sings in a voice nearly as roughhewn as Johnson’s, his slide guitar generating heat and light. The message of this song from the late ’20s is especially relevant now: “You must always treat a poor stranger right and accept him in your home.” Cooder returns to Johnson for “Nobody’s Fault but Mine,” in which a keyboard line creates an atmosphere of damp swampiness. Cooder sounds ancient and wise here, and his stunning acoustic slide guitar work reaches back through the mist to the blues masters who’ve long inspired him.

As for Cooder’s own songs, “Shrinking Man” has the vintage blues feel of some of the other songs on the album, and warns that living in comfort off the work of others less fortunate leads to our own diminishment. “Gentrification” is reminiscent of some of Paul Simon’s recordings: not blues, perhaps, but rooted in and inspired by African pop. And the tender “Jesus and Woody” imagines Christ asking Woody Guthrie to “drag out your Oklahoma poetry, ’cause it looks like the war is on.”

The title track is not the Robert Wilkins tune made famous by the Rolling Stones but a gospel song recorded by the Heavenly Gospel Singers. Cooder adds a reference to pedal steel great Ralph Mooney, and ends with a line that reinforces his belief in the healing power and spirituality of music: “dim lights, thick smoke, and loud, loud music is the only kind of truth I’ll ever understand.” 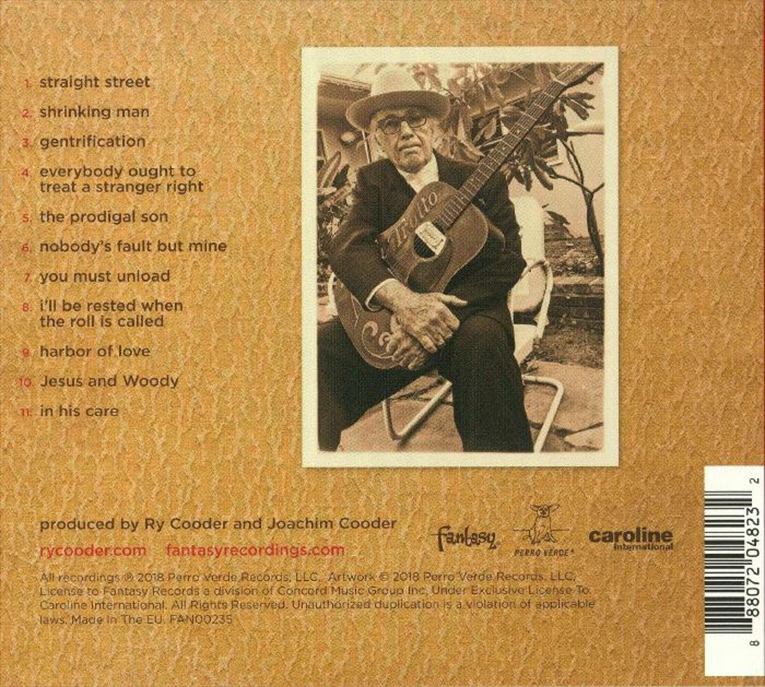 Even if The Prodigal Son is not as topical as some of Cooder’s other albums, these old tunes often address current issues. In “You Must Unload,” Blind Alfred Reed could have been talking about some people today when he sang, in the late ’20s, “And you money-loving Christians, you refuse to pay your share / You must unload, you must unload.” These gospel songs about things eternal encourage self-reflection and taking a longer view -- good advice in these times.

Ry’s son, percussionist Joachim Cooder, coproduced the album with his father; they bring the right touch to every song. The album is enriched throughout by the backing vocals of Bobby King, Arnold McCuller, and the late Terry Evans. Martin Pradler recorded, mixed, and mastered, and the sound is vivid and clear. Stringed instruments are sharply focused, Cooder’s voice is centered and three-dimensional, the backing singers arrayed behind him. Joachim’s drums and percussion are forceful and energetic.

Ry Cooder’s consistency is such that The Prodigal Son can’t be called a return to form -- he never left. Instead, it brings him back to one of his great strengths: preserving and renewing great American songs. This album ranks with his best work, and that’s saying a lot.