Norah Jones has avoided the Best New Artist Grammy curse, which usually leads to obscurity. Not only has she collected more Grammys since her big win in 2003, for her debut CD, Come Away With Me (2002) -- she’s continued to record albums that chart well and receive good notices from critics. Jones has also challenged herself by appearing on recordings by a variety of other musicians, including Q-Tip, Belle and Sebastian, Irma Thomas, and Bonnie Raitt.

Her new album, Begin Again, is a collection of singles released over the last year, with three new songs. Jones often chooses producers who encourage her to move in new directions -- e.g., Danger Mouse, for Little Broken Hearts (2012). For Begin Again, Thomas Bartlett (aka Doveman) and Wilco’s Jeff Tweedy help out on two tracks each; Jones produced the remaining three tracks.

In “My Heart Is Full,” Bartlett plays piano and other keyboards to create a swirling ambient effect, and an OP-1 synthesizer to provide a thumping bass-drum beat. Jones sings lead, answering herself in her own overdubbed voice as she expresses dismay at seeing so much and being unable to take action: “My mind is free (free, free) / My hands are tied (tied, tied).” This minimalist track relies on Jones’s strongly felt singing, but Bartlett’s haunting accompaniment, and the echo he adds to Jones’s voice as the track builds to a climax, creates a powerful effect, and the quieter closing passage provides a complex message of hope. 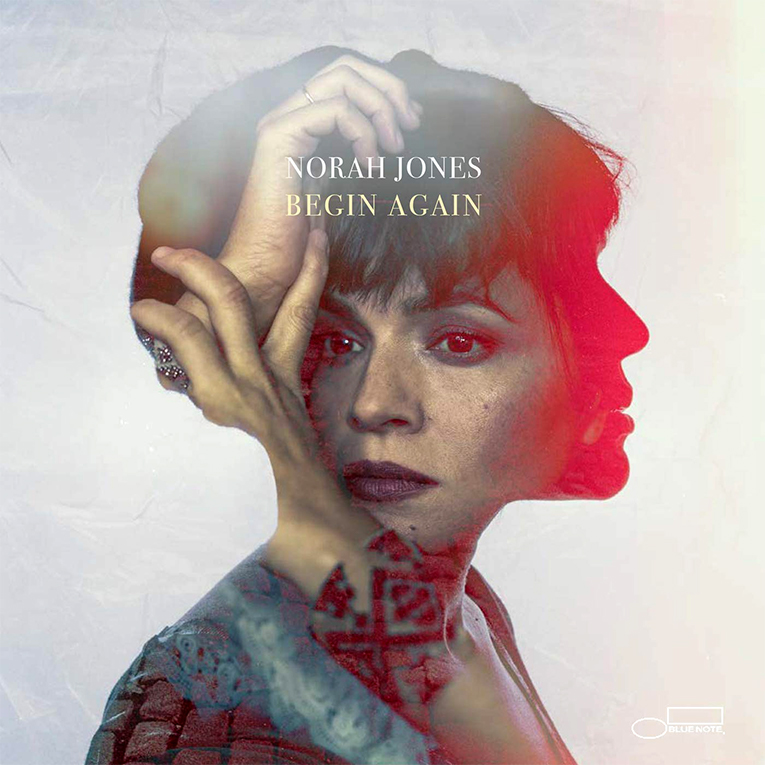 Bartlett’s drum programming helps move “Uh Oh” along, Jones contributing her own drumming to reinforce the powerful dance groove. Her Fender Rhodes piano adds a touch of funk, for a more pronounced soul-music feel than in “My Heart Is Full.” Drummer Brian Blade provides the grease for “Begin Again,” one of the three produced by Jones. Here Chris Thomas’s double bass reinforces the rhythmic drive, and Pete Remm’s Hammond B-3 and Jones’s own lively piano add flavors of R&B and gospel.

Jones’s piano in the beginning of “It Was You” makes another gospel connection in a track whose stirring horn arrangement is influenced by Southern soul. Blade and Thomas again provide the rhythmic punch, but it’s Jones’s flowing piano and slightly smoky singing that give this performance heart, Remm again filling things in nicely on B-3. “Just a Little Bit,” the third track produced by Jones, uses the same lineup of musicians, with Remm sitting out. The singer’s phrasing contains a hint of Billie Holiday without stooping to mere imitation.

Jeff Tweedy’s acoustic guitar brings a slight touch of Americana to “A Song With No Name,” in which Jones plays celesta, mixed somewhat low, to add a hint of exotic strangeness. Tweedy’s arpeggios on electric guitar and Jones’s simple piano lines strengthen the spell cast by her haunting singing. And Tweedy’s son Spencer joins them on drums for “Wintertime,” a bluesy track that benefits from his father’s well-played, low-key guitar lines.

Begin Again was mastered at Sterling Sound by Chris Gehringer, who’s done a good job of giving a consistency to recordings produced in different studios by different producers -- but I found the two tracks recorded by Tweedy in Wilco’s Chicago studio, The Loft, the most sonically pleasing. The other tracks are listenable overall, but Thomas’s bass in the title track is less defined than in the other two tracks on which he appears, and I thought the album could have used a little less compression overall.

Since her first two recordings Jones’s voice has matured, and gained emotional depth and complexity; it’s developed a slightly sandy quality that makes it more endearing and compelling. At 29 minutes, Begin Again could perhaps be a little longer, but it’s a lean and focused statement of Norah Jones’s continued growth as a musician.