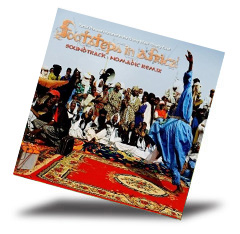 Each of the discs highlighted in this month's "Select Sounds" weaves melodious chords of intrigue, mystery, and magic. Spanning the globe from African deserts to smoky cabarets and including French Acadian and gypsy caravan cultures, these albums are united by a nomadic spirit and rhythms that find roots in the universal language of music.

Documentary filmmaker and producer Kathi von Koerber's Footsteps in Africa project began as a feature-length film exploring the life, worldview and creativity of the nomadic Tuareg people of the Sahara desert. The film is set to debut at select festivals around the world later this year, but its trance- and dance-inducing soundtrack was released on June 1. Originating from ancient migratory tribes crossing desert lands from India to Africa and the Middle East, the Tuareg use music as a unifying force, often singing, dancing, and playing music for hours on end during communal gatherings. Taking authentic field recordings from several ceremonial and festival gatherings, Joshua Jacobs collaborated with DJs worldwide to turn these excerpts of Tuareg life into full-on dance floor-ready remixes. Persian-American composer, Jamshied Sharifi adds instrumental overdubs to eight of the disc's 14 tracks, offering an array of soundscapes for expansion by DJs like Nicodemus, DimmSummer, and Cheb i Sabbah. On "Open," the Bombay Dub Orchestra drops a percussive onslaught of djembe and hand drums over Morocco's Hassan Hakmoun's deep singing drone to create a heady, sonic vibe. Listening transports you to sand-strewn landscapes where hot desert winds whip ancient melodies into reborn remixes that sound at once old and new. Footsteps in Africa Soundtrack: Nomadic Remix (Kiahkeya 001) also serves a good cause, as 15 percent of profits go to the Nomadic Villagers Clean Water Awareness Fund, a collaborative charity established by the film's producers, the Indigenous Cultural Educational Center, and Tuareg leaders to improve wells and access to clean water for the people and musicians featured in the film and soundtrack. 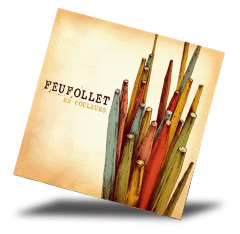 The sub-Saharan spell is broken when Fuefollet's new disc begins. A raucous Cajun spirit is ushered in and, like stepping from a time machine, I imagine I've arrived in a rowdy jukejoint in the Bayou lands of Lafayette, Louisiana. En Couleurs (MUD 6503) is the new release from the youthful, highly skilled musicians in Feufollet, and it continues their tradition of respecting their Acadian forebearers while paving uncharted territory in the zydeco/Cajun genres. "Cajun pop" is how fiddler and accordion player Chris Stafford characterizes the sound, and while the album includes some traditional numbers, the originals take a divergent path that tingles with an exploratory freedom and freshness. Unusual instruments such as a digital autoharp, glockenspiels, and toy pianos mingle with the standard accordion, mandolin, fiddle, and guitar to create a unique sound that's clearly Cajun, but also vaguely indie pop. Opener "Au Fond Du Lac," written and beautifully sung by Anna Laura Edmiston, waltzes out of the gate with a pretty, lanky shuffle, telling a creole tale of love gone wrong. Short instrumental interludes, ranging from 29 seconds to just under two minutes, pepper the disc, segueing into longer lyrical ballads. There's an easy lilt to the songs and though much of the material deals with tales of woe, the foreign tongue and melodious accompaniment mask any tragic feel. En Couleurs arrives just a year after the band's last release, Cow Island Hop, and it brings a wealth of good new material. This prolific band continues to deliver their authentic and evolving sound to the masses; my only complaint with this one is that at 42 minutes, it's over too soon. 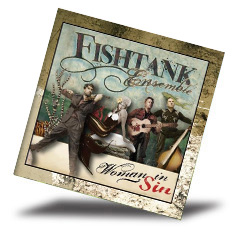 Finally, Fishtank Ensemble ups the ante with Woman in Sin (FE 1003), one of the most eclectic and pleasant new surprises I've uncovered in some time. The four-piece band comprises a melting pot of creative talent with two Americans (vocalist Ursula Knudson and flamenco guitarist Doug Smolens), a Parisian violinist (Fabrice Martinez), and a Serbian-born upright bassist (Djordje Stijepovic). Knudson's coy vocals are one part Betty Boop, one part torch singer, and one part classically trained operatic, climbing octaves effortlessly. The music is inspired by Roma roots and includes Kurdish, Dutch, Transylvanian, and Serbian traditional songs, as well as originals rooted in those and similar cultures. First-rate musicianship harnesses the energetic thrust of the tunes, which the group renders rich with a Hot Club and theatrical flair. After just one listen, you'll find it hard to resist the urge to clap and shout "Opa! Opa!" in chorus. "Djordje's Rachenitza" showcases the awesome slap-bass talent of Stijepovic, and the seductive cover of Edie Cooley and Otis Blackwell's "Fever" is a sexy showstopper that lets Knudson's incredible vocals sizzle. The band apparently lives in Hollywood, CA, and travels to local gigs by means of a kitschy (but functional) mule-drawn gypsy wagon. After hearing their music, that isn't hard to believe. I'm continually inspired by people who can have this much fun making a living.

These disparate albums are unified by the quality and creativity of the music they contain. Hollywood gypsies, desert nomads, and young Cajun blood have all celebrated their unique cultural roots and generously inducted the rest of us into their folds. Opa!