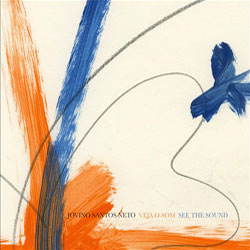 The Brazilian pianist Jovino Santos Neto, who has lived and worked in the US since 1993, has recorded duet CDs with Weber Iago (Live at Caramoor, 2008) and label mate Mike Marshall (Serenata, 2003). Veja O Som pairs the pianist with 20 musicians, including Marshall, for this two-disc collection, with one disc recorded in Brazil and the other in the US. Santos Neto and Richard Zirinsky Jr., the executive producer of the disc and owner of Adventure Music, each chose the musicians who appear here. The idea for the set was Zirinsky’s because, as he told Santos Neto, “what the world needed at that stage of extreme global uncertainty was the reassurance of one-on-one human warmth and interaction.”

According to Santos Neto in his eloquent liner notes, “As the ensemble size diminishes, both the level of commitment to the moment and the depth of the listening focus increase considerably.” The conversations between musicians on this set cross styles and musical temperaments, and each of the players depends on the other for support during improvisational flights. While the US disc includes its share of American musicians, the majority of the players are Latin American, as are most of the compositions. The compositions are harmonically and rhythmically varied and challenging, and those qualities make for an excitingly paced set.

Tenor saxophonist David Sanchez joins the pianist for a spirited and soulful version of “Aquelas Coisas Todas (All of Those Things)” by Brazilian guitarist Toninho Horta. The recording pulls you close to the musicians, and Santos Neto’s harmonically rich chording resonates vibrantly in the soundstage. The recording engineer, David Lange, also catches Sanchez’s elegantly gritty reed work. Santos Neto and Mike Marshall play off each other beautifully on “Santa Morena (Dark-Skinned Saint)” by the great Brazilian mandolin player and composer Jacob Bittencourt. Marshall switches between mandolin and mandocello, and the deep warmth of the latter instrument seems to wrap itself around Santos Neto’s expansive piano lines.

Veja O Som offers a clear display of Jovino Santos Neto’s virtuosity. The pairings with so many different musicians show both his technical abilities and his emotional and stylistic range. He’s a subtle and unobtrusive accompanist to the four singers -- the track with Paula Morelenbaum is especially delicate and beautiful. The disc also has a pleasing variety of tones and textures, from the softness of Teco Cardoso’s flutes to the throatiness of David Sanchez’s saxophone. Bill Frisell’s ringing guitar tones move beautifully with Santos Neto’s sustained piano chords, but my favorite pairing might be João Donato’s electric piano and Santos Neto’s melodica.

The recordings, from seven studios, are uniformly excellent, and Ken Lee has mastered them seamlessly. But the disc isn’t perfect. Gretchen Parlato’s vocal on Jobim’s “Insensatez (How Insensitive)” is perhaps underpowered, and the title track takes a few listens before it falls into place. That said, Veja O Som meets Zirinsky’s goal for Santos Netos. It’s a reassuring, hopeful disc.