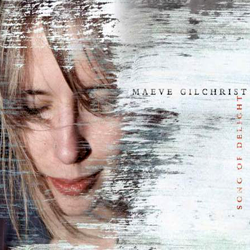 Scottish harpist and singer Maeve Gilchrist writes songs by injecting a healthy dose of jazz into the folk music she heard growing up. She studied classical piano and Celtic harp in Edinburgh before moving to Boston to study jazz and world music at Berklee College of Music. She has such a wide background in so many traditions that she’s comfortable in all of them and able to weave them together without effort. The songs on her second disc, Song of Delight,lean toward the sophisticated pop of singer-songwriters like James Taylor, Norah Jones, and Joni Mitchell. Gilchrist’s voice has a charming hint of Scottish brogue, and her phrasing, as with her songwriting, has the rhythmic playfulness of jazz mixed with pop’s accessibility.

Gilchrist’s harp gives her songs an airy openness, and producer Darol Anger wisely surrounds her with musicians who share her love of space and subtlety, including bassist Aidan O’Donnell, whose fluid, highly rhythmic playing shows a keen understanding of the musical traditions that flow through Gilchrist’s songs. Anger himself is a master of many styles, from swing to newgrass, and his energetic playing is often a key element in focusing Gilchrist’s arrangements. Some of Ms. Gilchrist’s tunes, such as "Song of Delight," would seem less substantial without the support and insight of the other musicians.

On the other hand, Gilchrist’s enchanting scat singing and intelligent improvisation are what make a song like "Legend of the Ear" such a pleasure, even with Mike Block’s cello and Anger’s sterling solo electrifying the song. "Automne" is the closest Gilchrist comes to straight jazz singing on Song of Delight, and it made me long for more -- maybe even a standard or two. "Fleur De Mandegore" and "Kate’s Journey" are light instrumental fare. They’re no less enjoyable, but they reinforce the feeling that ultimately this is the kind of disc you play when you’re enjoying a glass of wine in front of the fireplace.

Song of Delight is perfectly suited to that sort of casual scenario, but it’s also substantial enough to merit close listening. Maeve Gilchrist’s blues-influenced playing on "Legend of the Ear" suggests she could venture into straight jazz harp along the lines of Dorothy Ashby, a pioneer on the instrument, but her songwriting could just as likely lead to a strong pop-music following.

Darol Anger recorded and mixed Song of Delight, and it sounds terrific. Gilchrist’s voice is out in front and sharply defined, and Anger’s sharp ear serves the qualities of the acoustic instruments quite well. The music is presented in a deep soundstage with each element placed precisely. Ken Lee’s mastering is also very good, and the disc flows easily. Song of Delight is light without being lightweight, and I found myself enjoying it more, and hearing more elements within it, with each listen.