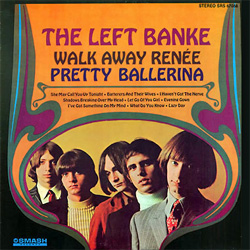 When, in 1967, The Left Banke completed its first LP, Walk Away Renée/Pretty Ballerina,the New York quintet had already made a couple of personnel changes. By the time Smash Records released Left Banke Too in 1968, only three of the group’s five original members remained. That instability, along with ego problems and legal complications, shortened what could have been a long and distinguished career in rock’n’roll. Left Banke compilations have drifted in and out of print over the years; Sundazed Records’ reissues of Walk Away Renée/Pretty Ballerina on CD and LP are the first versions available in almost two decades.

Keyboard player Michael Brown was 16 when he wrote "Walk Away Renée," a tune that displays the Left Banke’s versatility. Although the group’s use of harpsichord, strings, and complex vocal harmonies caused their music to be tagged as "Baroque Rock," "Walk Away Renée" was soulful enough to be covered by the Four Tops. The strings and woodwinds on "Pretty Ballerina" were closer to the baroque style, and the song’s sure craftsmanship and beautiful melody helped make it the group’s second hit. "What Do You Know" is a convincing stab at country rock, and "Evening Gown" is as gritty as any garage-rock tune that features a harpsichord can be.

Shifting personnel led to the band being augmented by session musicians on many tracks, but the album has a consistent identity. Walk Away Renée/Pretty Ballerina still sounds fresh because it’s so well played, and filled with small details that repay repeated listening. While using the harpsichord on so many songs could have been a mere novelty that soon wore thin, it gave the tunes a ringing, buoyant tone similar to the effect the 12-string guitar gave the Byrds’ music. Brown’s talent as a writer and arranger probably helped the songs maintain a consistent sound and feel, but it’s Steve Martin-Caro’s singing that brings focus to them, and to the album as a whole. On "Let Go of You Girl" he sounds uncannily like John Lennon; in fact, Walk Away Renée/Pretty Ballerina is as close as any other band got to creating an album as perfect as the Beatles’ Rubber Soul.

I compared my original LP with the Sundazed reissue and found that the earlier master was a bit forward. The Sundazed pressing flows more easily, and the string arrangements are warmer and more naturally integrated with the other instruments. The Sundazed edition also sounds better than the tracks on There’s Gonna Be a Storm: The Complete Recordings, 1966-69, a reasonably well-mastered compilation that Mercury released on CD in 1992.Harmony vocals are placed more accurately behind the lead vocal on the LP, and the drums are placed more convincingly in the soundstage, not forward as they are on Storm.

Sundazed’s CD edition includes liner notes with recent interviews that are not included with the LP, but you can find them at www.sundazed.com/shop/notes/sc6276_notes/notes.html.

Sundazed has also released Left Banke Too on CD and LP, and it’s every bit as essential an album as this one. I believe that vinyl is the best way to hear these two great recordings.