Mike Stern: "All Over the Place" 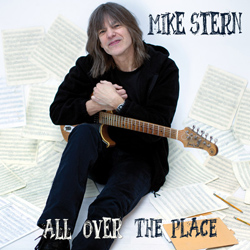 Jazz guitarist Mike Stern is probably known best for his stints with Miles Davis in the 1980s, but he’s also played with Blood, Sweat & Tears, Billy Cobham, Jaco Pastorius, and Michael Brecker. That’s a typical résumé for a musician who didn’t immediately jump into leadership or stardom, and it’s the sort of background that breeds versatility. Stern’s new disc, All Over the Place, is his 15th, and the title might be a nod to the variety of compositions and settings Stern has given himself to stretch out in. He’s brought in a broad spectrum of jazz musicians to help develop the 11 compositions here, all by Stern, and each brings a key element to one or more of the tunes. The surprise is that a disc made up of so many combinations of musicians and styles hangs together so consistently.

Stern gives bassist Anthony Jackson a nod with "AJ," a funky workout in which Jackson takes the central role in the song’s ebb and flow. Solo time goes to Stern and saxophonist Chris Potter, with both players digging deep into the blues. The two exchange solos near the end of the track, and ideas flow so easily that it never descends into a shooting match, but builds in intensity and inspiration. "Cameroon" has a Weather Report groove enhanced by the singing of Richard Bona, who hails from that African country and also plays bass on this track. The tune’s infectious bounce gives Stern a platform for an extended upbeat workout. Bona, percussionist Tim Keiper, and drummer Dave Weckl play tightly through the complex rhythms, and Bob Franceschini’s slightly grittier saxophone solo adds an edge to and concludes the track.

A nylon-string guitar sets the tone for "As Far As We Know," which features a beautiful wordless vocal by Esperanza Spalding, who also contributes acoustic bass. Stern plays a touching, restrained solo, and drummer Lionel Cordew’s deft brushwork and gentle cymbal accents provide subtle underpinning. Drummer Al Foster and bassist Dave Holland are on hand for two hard-bop tracks, "Blues for Al" and "OCD." Both blues-based songs feature inspired turns on saxophone by Kenny Garrett, who carefully builds his solos to create tension and drama. Stern’s solos include long melodic flights interjected with complex chord runs that demonstrate both his command of jazz guitar and his knowledge of its history. Holland and Foster sit in on another acoustic ballad, "You Never Told Me."

Jim Beard produced All Over the Place and plays keyboards on all tracks; his support gives these arrangements the harmonic foundation they need. Other musicians, including bassist Will Lee and Leni Stern (Mike’s wife, and herself an accomplished guitarist) bring their unique personalities to Stern’s tunes. The recordings and some postproduction took place in different studios, but Greg Calbi’s mastering gives the disc a cohesive, open, very immediate sound.

Mike Stern is a flashy guitarist, but he brings so much melody and elegance to his playing that he never bores with technique, and he shares time generously with other musicians. Despite its title, All Over the Place offers 11 examples of the work of a focused musician whose interests range as widely as his talent.