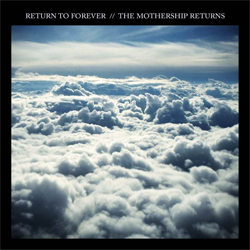 Return to Forever, the jazz-rock fusion group Chick Corea established in 1972, has been through several personnel changes over the last 40 years, but its most popular lineup featured Corea on various keyboards, Al Di Meola on guitar, Stanley Clarke on bass, and Lenny White on drums. That group folded in 1976, but reunited in 2008 for a tour and a live two-CD set, Returns. In 2011, Corea, Clarke, and White formed what they’re calling Return to Forever IV, with guitarist Frank Gambale and the venerable French jazz violinist Jean-Luc Ponty. The Mothership Returns is a three-disc set (two CDs, one DVD) culled from the group’s 2011 tour.

The CD booklet includes a brief note from Metallica’s current bassist, Robert Trujillo, who recalls running into many of the same people at metal shows and Return to Forever concerts in the early 1980s. "RTF was that musical bridge," he writes. I can understand what metal fans might like about a loud, fast, chops-heavy fusion band. This version of RTF retains the skills and the quirky time signatures that were the earlier group’s trademarks, but it’s lighter on its feet -- it actually swings. Gambale, who toured with Ponty in 1986 before a long stint with Corea’s Elektric Band, is a more organized guitarist than Di Meola, and leaves more breathing room in the music.

Ponty brings considerable skills to RTF, along with one of his compositions from the mid-’70s, "Renaissance." They give the tune a 20-minute workout, but it never meanders, and Ponty’s melodies are at the center of the improvisations. He gives "Medieval Overture" emotional and melodic focus; it’s less frantic than the original version, on Romantic Warrior (1976). With Di Meola, RTF was a driven band, and the musicians often scrambled over each other. Here they’re more responsive and more cohesive as a band, as well as more nuanced. Lenny White’s "The Shadow of Lo," paired in this performance with his "Sorceress," highlights the beauty of the melody, which was somewhat subverted by the distortion on Al Di Meola’s guitar in the original recording, on Where Have I Known You Before (1974).

White has moments on The Mothership Returns where the sheer power of his playing is breathtaking, and he swings harder and maintains a more solid groove than in the past. Corea has sometimes been a coldly impressive technical player, but recently he’s opened himself up emotionally, and added tremendous depth and beauty to his work. Clarke is reliably funky and driving, and his double-bass solo in "Renaissance" is a highlight. Gambale is quick but never loses sight of the melody, and his chording behind the other players is sensitive and responsive.

The engineering of The Mothership Returns captures the band’s majestic power, and especially of White’s drums, but I wish it conveyed a better sense of the halls in which it was recorded. However, individual instruments, especially Corea’s array of keyboards, come across well, and Greg Calbi’s mastering gives the disc a coherent feel. The DVD includes a documentary about the songs, two lengthy performances in stereo and 5.1-channel surround, and a trailer for an upcoming film about the band. Longtime fans of Return to Forever may find that the current lineup lacks some of the sheer brute force of the mid-’70s group, but there’s nothing lightweight about Return to Forever IV. This mothership takes flight.