The Gaddabouts: "Look Out Now!" 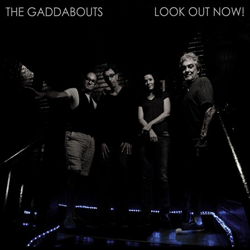 Steve Gadd’s formidable chops and unerring sense of time have made him a first-call session drummer since the 1970s. For his new band, the Gaddabouts, he enlisted the services of three other musicians with impressive credentials. Andy Fairweather Low has played with Eric Clapton and Roger Waters, among others, and Pino Palladino, who also toured with Clapton (as did Gadd), was Pete Townshend and Roger Daltry’s first choice for the Who’s bass spot when John Entwistle died.

The fourth member of the band was a bit of a surprise to me. Guitarist and singer Edie Brickell is best known for her work with New Bohemians. Although New Bohemians was often thought of, perhaps inaccurately, as a jam band, Brickell has recorded in a variety of other settings since her debut with them in 1988. She and Gadd made some demos together in 2000, but didn’t get around to forming a band until 2010. The Gaddabouts released their eponymous first disc last year, and this year brings us this two-CD set.

Look Out Now! has such a relaxed feel that it takes a while for its many great ideas and details to bubble up and catch the ear. Brickell says that "Meat On Your Bones" was an improvisation, and at first it sounds like a throwaway track -- but each play reveals new riches, especially Palladino’s rollicking bass and Brickell’s percussive acoustic guitar lines. Every song reveals attention paid to small details that bring you back for more. Ronnie Cuber and Larry Goldings guest on a number of songs; Cuber’s baritone sax fleshes out the title track, with some help from Goldings’s accordion.

The songs themselves, an easy combination of blues, jazz, and folk, lodge themselves in the mind with their strong melodies, good-humored lyrics, and clever arrangements. "Blessed Days" has a gentle message of good will that Brickell brings off with unforced conviction. Fairweather Low’s gently plucked guitar chords cradle her voice, and Cuber contributes a beautiful, understated solo on tenor sax. "River Rises" is cool and swinging, carried along on a series of octave runs by Fairweather Low and stark piano chords from Goldings. In fact, "River Rises" is a good example of why Look Out Now! is such a strong set, but one that has to grow on you. The tune seems sparsely arranged, but after a few listens, the details come together as absolutely, inevitably right.

A quick reading of the musicians on Don’t Look Now! might lead one to expect lots of flash, but even in "Free," where Mike Mainieri fires off a strong vibraphone solo, everything falls into place with ease and precision. Brickell’s fingerpicking on acoustic guitar plays a central role in several of the songs, and her skills are as impressive as those of her bandmates.

Andy Smith recorded and mixed Look Out Now!, which has a clean, sharp sound. Gadd’s drums, especially the low stomp of the kick drum, are majestic, and the attack of Palladino’s bass is very clear. The texture of Brickell’s voice is out in front but not aggressive, and there’s enough depth to allow the many layers of the music to rise slowly to the surface. Released with little fanfare on Brickell’s own label, Look Out Now! is the kind of disc I’ll still be playing, and hearing new things in, for a long while.