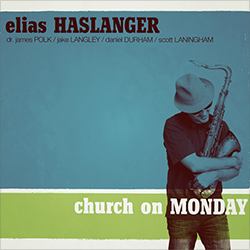 Tenor saxophonist Elias Haslanger is based in Austin, Texas, where he’s a pillar of the local jazz scene. He’s toured the US and Europe with a variety of jazz and pop artists, including Maynard Ferguson, Ellis Marsalis, and Asleep at the Wheel. The cover of his newest recording, Church on Monday, is in mid-’60s Blue Note Records style, front and back, including liner notes by a prominent jazz critic, in this case DownBeat’s Michael Point.

Haslanger and his band recorded the music at an Austin church that has been converted into a recording studio -- an appropriate setting for a record whose soulful blend includes a strong hint of gospel music. In his notes, Point mentions Stanley Turrentine, but I thought of Lou Donaldson’s classic Blue Note recordings with organ, such as Alligator Boogaloo and “Good Gracious!”.

The title track announces Haslanger’s intentions to swing and play the blues, with Dr. James Polk on organ keeping things simmering. Polk’s history served a lengthy stint in Los Angeles with Ray Charles before returning to Austin to teach music, where he continues to be active in music, and Haslanger and his companions have clearly heeded Polk’s advice for this session: “Don’t forsake the groove.” Church on Monday grooves, alright, and it’s great fun; it’s also intelligent and smartly played.

Haslanger has the grit and blues foundation required for this style of soul jazz, but he also knows how to handle a ballad. His sure, sensitive touch in “On a Clear Day” shows his versatility and depth. His tone is full and clean, but he doesn’t lose sight of the melody. Nor does he let technique rule him in the up-tempo tracks. His quick flurries of notes in “Invitation” never stoop to mere showiness, but explore his conception of the song’s harmonic possibilities.

The rest of the group is just as impressive. Polk is a joy to listen to, his experience and assurance making each solo a clear and well-thought-out statement that still has the freshness of jazz improvisation. Guitarist Jake Langley is fast, fluid, and bluesy, drummer Scott Laningham drives the band with subtlety and quick wit (you could have an enjoyable listening session concentrating only on his ride-cymbal technique), and bassist Daniel Durham keeps the music flowing. Stanley Turrentine’s Hustlin’ (1964) was an inspiration for this set, and Haslanger’s tribute is a track from that album, “Trouble No. 2.” As you listen to this group playing that old classic, you’ll be happy that soul jazz is in such good hands.

You can buy Church on Monday on CD or high-resolution digital, but if you have a turntable, don’t hesitate to pick it up on vinyl -- Haslanger has made sure that everything was done right. Engineer David Boyle caught the ambience and space of the old church, mixer Eddy Hobizal placed the instruments in a deep soundstage (though I might have given Durham’s bass a bit more presence), and Kevin Gray has done his usual excellent mastering job. The vinyl, by Quality Record Pressings, is of standard weight and very quiet, the album cover is solid cardboard, and the LP is housed in a static-free sleeve.

I admit that a soul-jazz album pressed on vinyl is something I’d be predisposed toward anyway, but Church on Monday is unexpectedly good. It doesn’t hurt that the LP itself shows a commitment to quality -- a commitment that tells me that Elias Haslanger takes what he does very seriously.