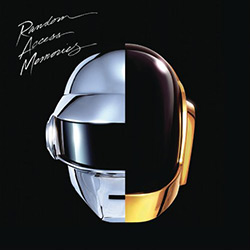 Whether or not they realize it, almost everyone has heard Daft Punk. The pair of French DJs produced three full-length studio albums before Random Access Memories, and helped compose the music for the film Tron: Legacy. But despite achieving massive commercial success, and having done much to further the appeal of electronic music, they remain reclusive. The Frenchmen remain masked not as a marketing gimmick, but rather as a way to retain their privacy, while also strengthening the illusion that Daft Punk somehow transcends mere flesh and blood.

Daft Punk’s longevity has been difficult to sustain. Many acts are content to ride the coattails of their earlier work by ripping themselves off, or the coattails of others by copying the prevailing musical trends of the day. Trailblazers, on the other hand, those who dare to tread new musical ground, are all too often punished with frightening alacrity. In Random Access Memories, the duo channels some of the best music of the late 1970s and early 1980s, reimagining dreadful clichés into something markedly more compelling. The result is at once familiar but distinctly new, with the likes of Paul Williams, Nile Rodgers, and Chilly Gonzales joining Julian Casablancas, Panda Bear, and Pharrell Williams as featured collaborators.

The radio hit “Get Lucky” features Pharrell Williams crooning over Nile Rodgers’s delightful guitar work. The track reeks of ’70s disco, with a tempo slow enough not to overburden your already tapping foot, but quick enough not to lose your interest. In other words, it’s perfect. The mostly instrumental track is sprightly and eager, with Daft’s signature augmented vocals appearing only briefly. And that’s the shocking thing about this track, which is a microcosm of the rest of the album: it’s far more disco than Daft Punk. And it’s magnificent.

“Giorgio by Moroder” features Giovanni Giorgio Moroder, an Italian septuagenarian with a rich musical history as a songwriter, performer, and producer. Part song, part monologue spoken by Moroder, the track charts his journey through the music scene. Daft’s meticulous production skills are in full force here, as the music evolves coextensively with Giorgio’s recollections. It’s delicate, exquisite stuff, with ambient crowd noise just out of reach, and a multitude of sonic styles, both old and new, on display in pristine quality.

The finale, “Contact,” opens with an excerpt from radio transmissions from the Apollo 17 mission that Daft Punk acquired directly from NASA, in which Commander Gene Cernan describes seeing a UFO in the distance. The gentle synthesizers ebb and flow during the course of the excerpt, and come alive at its conclusion, building over several minutes toward an apogee of distortion and tape running out. It’s a grand, anthemic conclusion to the album, with terrific drum work in the foreground, surrounded on all sides by sweeping synth lines. The upward trajectory of “Contact” begs for it to be played uncomfortably loud. It’s as raw as “Get Lucky” is processed, but nonetheless a grand departure.

The myriad musical textures, rhythms, and allusions on Random Access Memories coalesce into an oddly coherent package when listened to from start to finish. The sound quality is very good, and far better than one would expect from any album that’s No.1 on the US pop charts. Voices, even the synthesized ones, don’t ring with MP3-like hollowness, and instruments are weighted with the warm, sweaty haze of a late-’70s discotheque.

There’s something for nearly every listener on this musical journey through decades past. Some might feel that it meanders into nooks of obscurity, or self-indulgently dwells on seemingly lazy themes. But throughout, Daft Punk is deeply and unapologetically genuine. The result, ostensibly a collection of lost radio hits from decades past, is simultaneously a throwback and a certain future classic.