Arcade Fire’s fifth album, Everything Now, follows a gap of four years since Reflektor, which brought in LCD Soundsystem’s James Murphy as coproducer and upped the quotients of dance beats and electronics. At more than 85 minutes, Reflektor was too long -- even favorable reviews called out its length and lack of stylistic focus. Still, it was a typically ambitious outing for a band that’s never been content to simply repeat a formula.

Everything Now clocks in at 47:11 and takes as its theme consumerism. To that end the band created a mock Facebook page for the album, and parodies of such Web phenomena as fitness ads. The lyric sheet resembles a color insert for a drugstore. At the top of the sheet, near an Everything Now logo -- in fact, as printed, the title of each track looks like a corporate logo -- are quoted lines from the title track that the band clearly feels tie the album together: “I Need It. I Want It. I Can’t Live Without.”

Arcade Fire brought in Thomas Bangalter of Daft Punk and Steve Mackey of Pulp to help produce Everything Now, and one of the three versions of the title track included sounds very much like ABBA, in the way that Daft Punk, on Random Access Memories, evoked memories of such 1970s hit makers as Chic. The upbeat arrangement rubs up against lyrics filled with restless discontent. 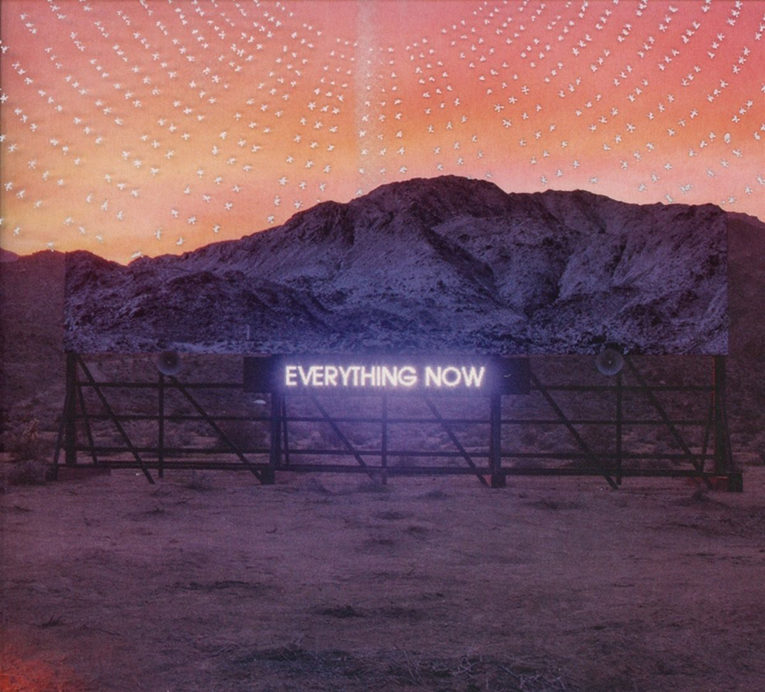 “Signs of Life” also takes its inspiration from the ’70s, with a bass line and fuzz guitar that bring back memories of Curtis Mayfield’s music for Superfly. As in the title track, the words convey a sense of emptiness in a land of plenty. “Looking for signs of life,” Win Butler sings, “Looking for signs every night / but there’s no signs, so we do it again.”

“Creature Comfort” pits a menacing, distorted synth line against a more palatable, bell-toned keyboard line. The keyboard washes and other effects give this track a pleasant, ear-friendly tone undercut by the subject: suicide. “Infinite Content” appears twice: first as a punk rave-up, then as a loping, faux-country tune. “Chemistry” plugs into my memories of David Essex’s “Rock On” and, more successfully than any other track on Everything Now, conveys how marketing equates consumer goods with fulfillment.

In “Put Your Money on Me,” loopy synths suggest an even more obsessive Tame Impala, the psychedelic band from Western Australia -- the song bounces along while still adhering to the album’s theme. The album’s most emotionally engaging song is the epic (6:29) “We Don’t Deserve Love,” filled with lush synths and rich vocals. 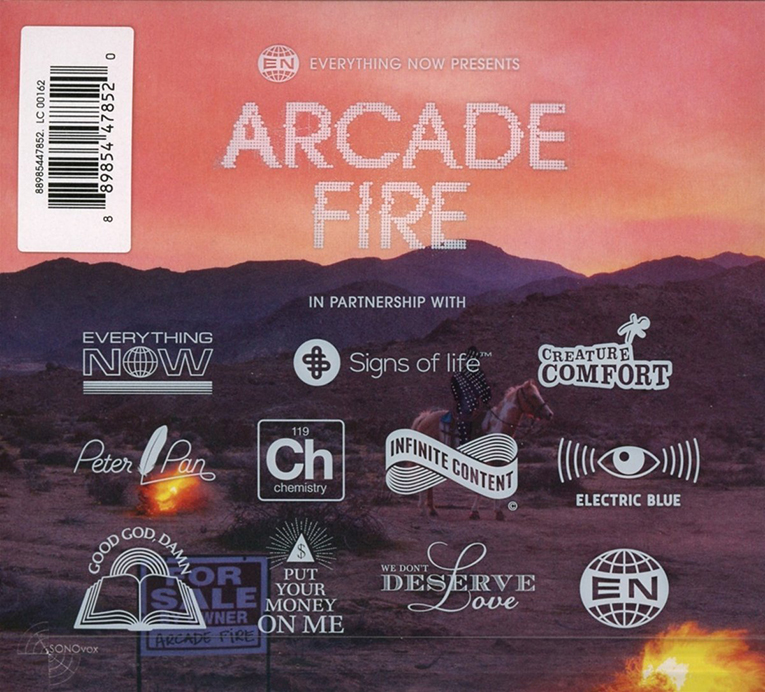 Everything Now is sonically rich and an impressive achievement, but it’s not an easy listen. Though Arcade Fire has never been lighthearted, their music and lyrics were usually well matched and the band’s own, even when other influences were audible. But the album feels too deliberate and studied. Thomas Bangalter probably helped the group nail ABBA’s sound in the title track, but when Daft Punk used influences from the ’70s in Random Access Memories, I could hear their affection for those artists. Arcade Fire treats them as aspects of an aural doctoral thesis.

A band that uses the Web to overhype an album about consumerism may lack a sense of humor, and that’s the one thing Everything Now doesn’t have. If Arcade Fire had injected into these songs some of the wit that went into the design of the lyric sheet, the result would have been more enjoyable. It’s easy to be impressed by the amount of work and skill that went into Everything Now; it’s not easy to enjoy the results.